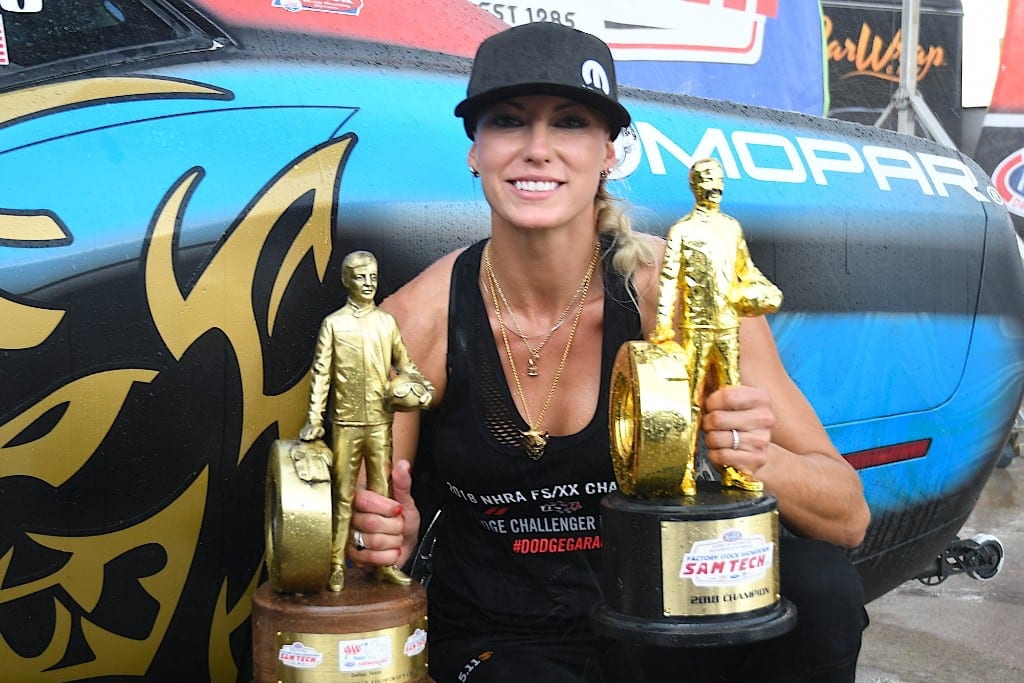 Leah Pritchett clinched the 2018 SAM Tech NHRA Factory Stock Showdown Series championship in her Mopar Dodge Challenger Drag Pak at the AAA Texas NHRA FallNationals, racing to her third consecutive win of the season and earning her first championship in her first full year competing in the class.

The NHRA Factory Stock Showdown crown is the third title for Pritchett, who also captured 2000-2001 Jr. Dragster Division 7 championships and the 2010 NHRA Hot Rod Heritage Racing Series Championship in the Nostalgia Funny Car class. She is currently the only professional driver in contention to win two world titles during the 2018 NHRA season.

Pritchett entered the action at the Texas Motorplex facility coming off of victories at the NHRA U.S. Nationals in early September and at the NHRA Midwest Nationals two weeks ago, where she became the first NHRA driver in the Factory Stock Showdown class to make a pass in the seven-second range. She qualified No. 10 and posted her quickest pass of the weekend, an 8.079-second E.T. at 169.64-mph, to defeat Aaron Stanfield in the opening round of eliminations on Sunday.

After advancing past Randy Taylor in the quarterfinals, Pritchett moved on to a dramatic semifinal grouping that also featured co-points leaders Stephen Bell and Arthur Kohn, with Pritchett trailing each by a single point. She squared off against Bell with her season on the line, leaving first with a clutch 0.038-second reaction time and recording a winning 8.107-second 169.00-mph mark. Kohn was up next, needing to win his semifinals match against Kevin Skinner to extend the championship battle to the final round. Skinner took the win, crowning Pritchett as the 2018 NHRA Factory Stock Showdown Champion. She would add the cherry on top by taking out No. 1 qualifier Skinner in the final with an arrow-straight 8.106-second pass down the track to earn her third consecutive event win.

“This championship ranks at the top of the list,” said Pritchett. “I might be holding this Wally right now, but 100% this is Dodge and Mopar and the technology they pour into this class. I just get to drive the car. For Kevin Helms, Terry Snyder, all of Don Schumacher Racing, powered by Pennzoil of course, this is absolutely incredible. We came in with a chance to win the championship, but our mentality was one round, one burnout, one line at a time and that’s what it took, so thank you to everyone that made this happen. I know I probably speak for the whole class, but a huge thank you to SAM Tech for sponsoring the Factory Stock Showdown Series. It’s really become one of the most exciting, grassroots classes out here.  I get to hold it, but this Wally is definitely going home to Mopar.”

The event win was number 332 for Don Schumacher Racing, the winningest team in NHRA history, and world championship No. 17.