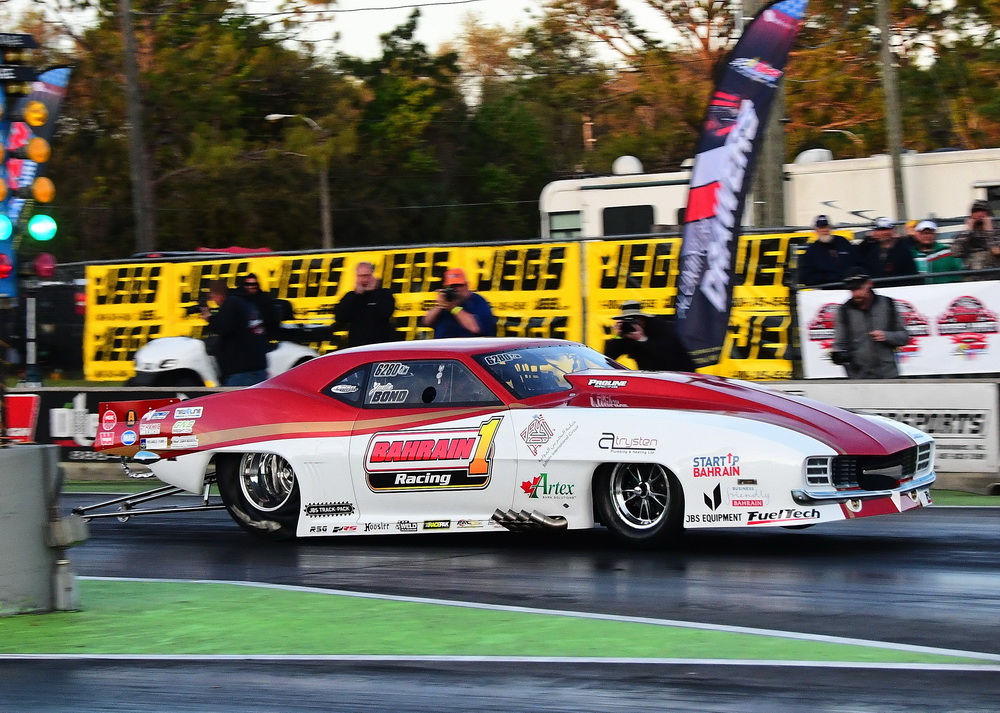 With a new car and new engine combination, Justin Bond set the new quarter-mile elapsed-time record for centrifugal superchargers when he recorded a 5.623-second, 253.14 mph pass Saturday night at the inaugural Drag Illustrated World Doorslammer Nationals presented by CTech Manufacturing at Orlando Speed World Dragway. Bond’s pass also put him in the No. 1 spot in the quickest NHRA-legal Pro Mod field in history. 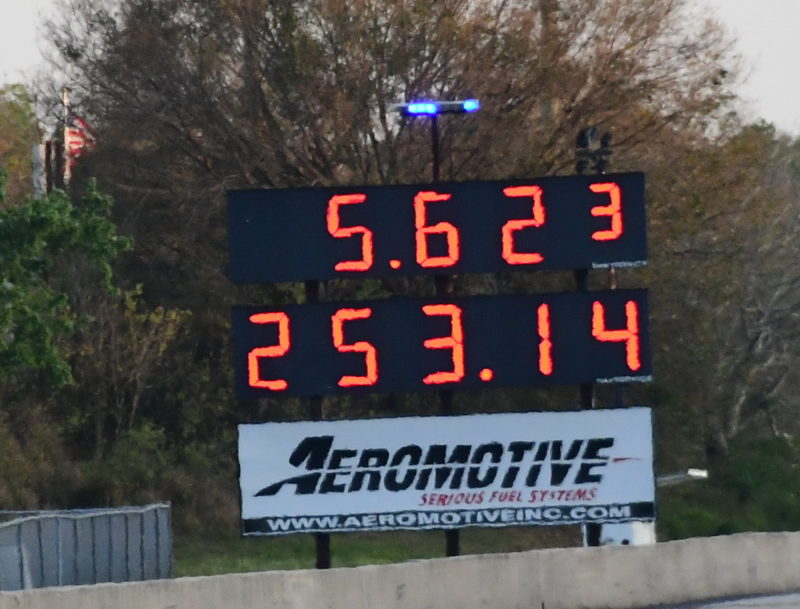 Bond is in only his fourth race in Pro Mod competition. His ProCharger-boosted, Pro Line-powered ’69 Camaro is one of several new cars entering NHRA Pro Mod competition after the centrifugal supercharger combination was added to the 2020 rulebook. Bond’s 5.623 is quicker than the current NHRA Pro Mod E.T. record, a 5.643 recorded by Stevie “Fast” Jackson in 2019.

Bond and his Bahrain 1 Racing team, led by tuner Brad Personett, are still getting acclimated with the ProCharger combination. They threw down a 5.626 at 254.90 in the third qualifying session Saturday afternoon, then repeated with the 5.623.

“We were expecting to go significantly slower,” said Bond, who will face Steve Matusek in the first round. “I’d never actually driven the car to the finish line [before the 5.626], so we didn’t know what it would do. The air really affects this combination a lot. Even when I drove it before to 5 seconds, we were running in 2,500 feet of air. We’ve had this car out two times before. It had 11 runs on it before we unloaded it here on Thursday. We just don’t know what to expect and we’re just finding our way.”

While the World Doorslammer Nationals isn’t an NHRA-sanctioned event, the technical department is following the NHRA rules. NHRA tech officials were also at the event and confirmed Bond’s car was up to spec when it made the pair of 5.62 passes.

“We hurt a valve on the first 5.62, so we had to take a cylinder head off,” Bond said. “[NHRA tech officials] were checking it, checked the bore and the stroke and the valves. They’re currently looking at our torque converter and they checked the rear end, so they’re going through the car with a fine-tooth comb.” 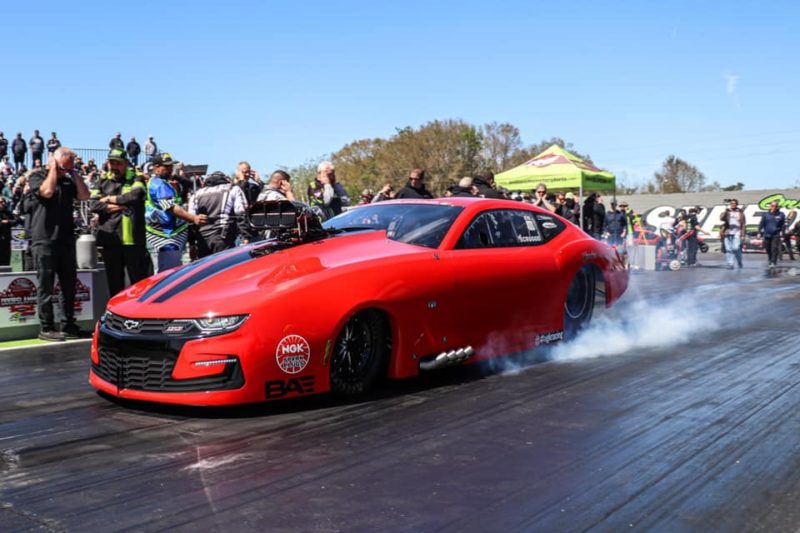 Sitting No. 2 behind Bond is two-time Pro Extreme world champion Jason Scruggs, who is going into his third season in NHRA-legal Pro Mod competition. He fired off a 5.656 at 254.86 in his roots-blown “Mississippi Missile” ’20 Camaro during the final qualifying session.

“My dad [Mitchell] and everybody on the team, we’ve been through a lot of struggles since we started doing this,” Scruggs said. “It feels good to get rewarded every now and then with those good runs. But at the end of the day we’re still new and we still have a lot to learn. Tonight was just one of those times where the air was really good and we just went down the racetrack on a clean run. That’s half of the battle.”

Scruggs will take on 2018 NHRA Pro Mod world champion Mike Janis in the opening round of eliminations.

He recognizes the significance of qualifying in the ultra-fast field, which is separated by just over a tenth of a second between Bond’s 5.623 and Matusek’s 5.739 on the bump spot.

“We just have to race our own race in every round,” Scruggs said. “Everybody is fast. There’s no easy round, no matter who you’ve got. There’s guys that didn’t make clean runs tonight that can outrun me and have been outrunning me. We’re just going to go out, run our race and try to go some rounds. When it gets that tight, you’ve got to have your stuff together, but you’ve got to have a little luck go your way. That’s just what we’re looking for, one round at a time.”

Alex Laughlin is heading into race day in the No. 3 qualifying spot with a 5.660 at 251.77. In addition to Pro Stock, he’s racing Pro Mod this weekend in a car he had never even driven before stepping onto the property earlier this week. The roots-blown ATI Performance ’69 Camaro is owned by the Caruso family, and is actually the car that Marc Caruso wrecked into the sand trap in Bristol last year. The car’s been repaired and is clearly proving that it can still make some quick runs down the racetrack.

The Texas-based racer’s weekend started off a little slow, but the car has consistently improved all weekend.

“I hadn’t even sat in this car until I got out here,” Laughlin said. “Every car has its own personality, fits different, feels different. I get a little bit more comfortable in it every pass. Qualifying third, not only in Pro Mod, but the quickest field in the history of Pro Mod, that is an absolute testament to what the Carusos are doing between their team and their equipment.”

“As long as I do my job tomorrow and we have a consistent racecar like we’ve had, we have as good of a chance to win this thing as anybody else.”

Laughlin will line up against the No. 14 qualifier, Jim Whiteley, tomorrow during round one.

Eliminations at the inaugural Drag Illustrated World Doorslammer Nationals presented by CTech Manufacturing will begin at 11 a.m. All the action will be streamed live at SpeedVideo.com. 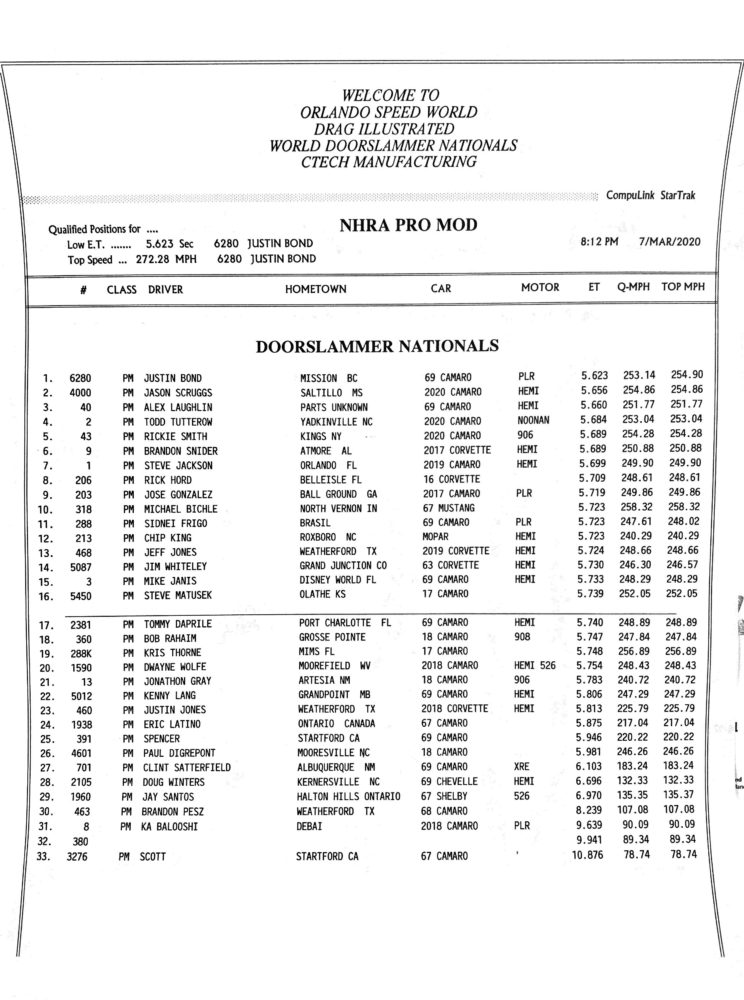 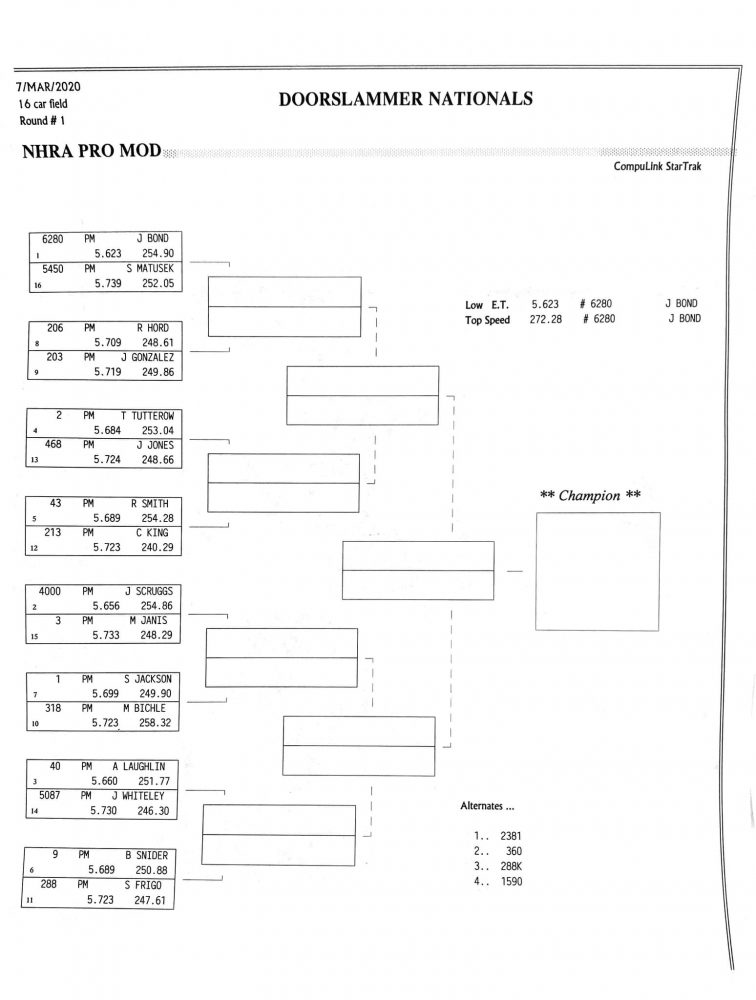