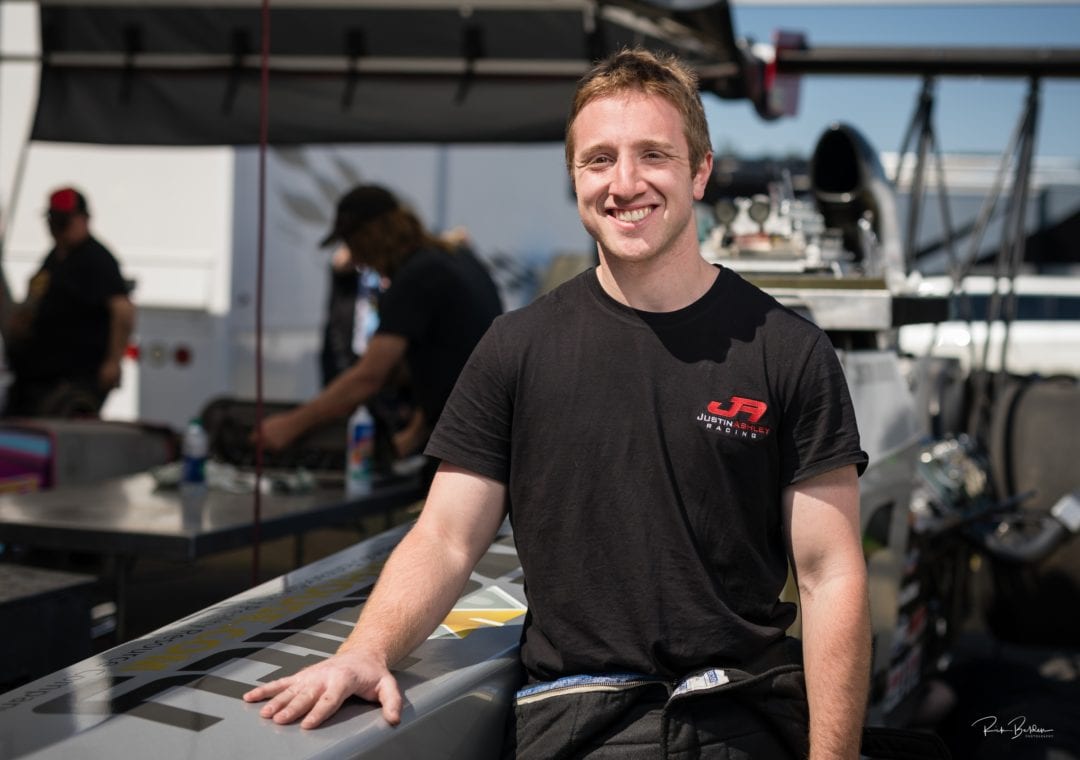 Justin Ashley Racing has acquired a complete A/Fuel team from Nitro University’s Anthony Dicero Racing. The team, based in Pittsboro, Indiana, plans to compete at select events for the rest of the year in preparation for the 2019 season.

As part of the acquisition, Anthony Dicero has joined the team as a consultant through at least June of 2019. Dicero will use his experience to help Ashley organize and run the team, which is led by veteran crew chief Lance Larsen. In addition to Dicero and Larsen, Tom Abbett and Mark Adkins, both former crew of Mike Ashley, will be joining the team. Krista Baldwin has been named Director of Social Media and Public Relations. She is expected to compete in at least 5 events with the new team.

“As a second-generation driver, I have spent a lot of time watching my father (Mike Ashley) own and operate his own teams both on the professional and sportsman levels,” says 24-year-old Justin Ashley. “I’ve learned a lot from those experiences and look forward to implementing many of the same principles in an effort to build a program dedicated to sustainable success on and off the race track. Of course my father is my ‘go to’ and my biggest fan. I’ll be relying on his guidance as I take on this new challenge.”

Ashley will formally announce the team’s primary and associate sponsors during the car’s unveiling at the 2018 Chevrolet High Performance U.S. Nationals. The team will begin an aggressive research and development program as early as the test session prior to the event.

“Let’s face it. This is a great class with a lot of tough competitors,” explains New York native, Ashley. “If we want to be competitive we’re going to have to get to work. I love the team we’ve assembled. Unfortunately, I’ve also grown close with the team I’m leaving.

“I’d like to thank Randy Meyer, Mary Meyer, and the entire Randy Meyer Racing team for providing me with the opportunity to be a part of their program,” reflects Ashley on his A/Fuel journey. “I’m very grateful to have raced with the Meyer family and cannot say enough about the hard work, time, and effort they put into giving me a highly competitive racecar. I’d highly recommend their rent-a-ride program to those looking for an opportunity to compete in the Top Alcohol Dragster category.”

Since his debut in 2017 in Top Alcohol Dragster, Ashley has been in 4 final rounds with 3 event wins. Justin has earned his Top Fuel license in Antron Brown’s MATCO Tools dragster. Also was recognized by Drag Illustrated’s 30 Under 30 list. The list is made up of honorees from every corner of the drag racing community and seeks to shine a light on 30 of drag racing’s youngest, brightest stars each year.