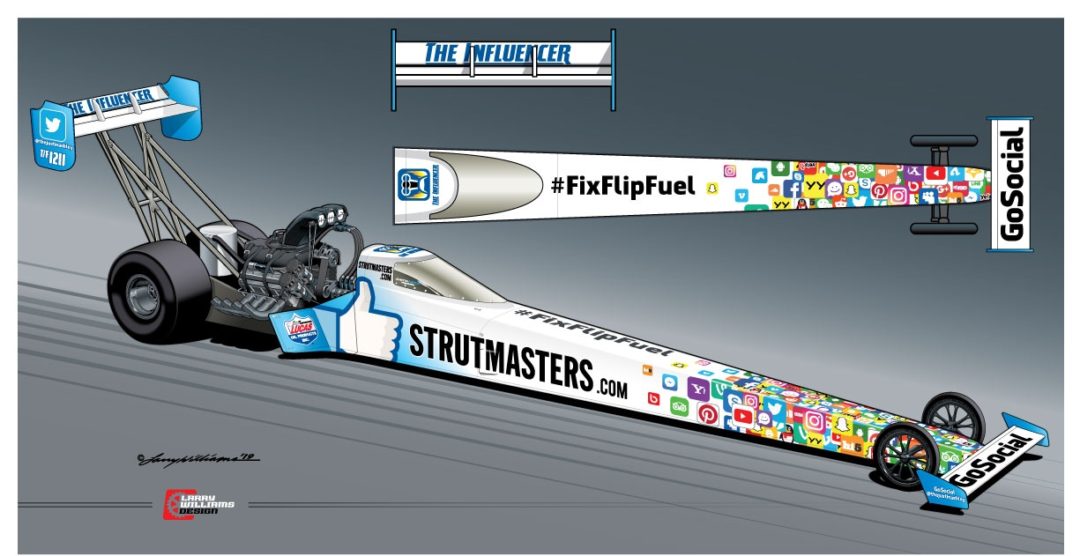 Strutmasters has signed on as Davis Motorsports’ primary sponsor for the three scheduled events in 2019 on the dragster which will be tuned by Aaron Brooks. Strutmasters will extend in 2020 as a Major Associate sponsor.

Strutmasters will be featured on the team’s #fixflipfuel online documentary, which will go live across all social media platforms simultaneously with the team’s debut in Charlotte.

“I am excited to come on board as a sponsor of Justin Ashley and Davis Motorsports,” said Chip Lofton, founder of Strutmasters. “It’s exciting to see young new drivers enter the sport and I’m proud to be a part of their team.”

“We’re looking forward to a successful marketing partnership with Strutmasters,” said Ashley, who is graduating from the Top Alcohol Dragster division. “We are going to work hard on and off the track to deliver measurable and significant value for the company. I traveled to Strutmasters to meet Chip, get a tour of his impressive facility, and learn about his company. Chip’s life story, his enthusiasm for his business, and his love for the sport of drag racing was so inspiring. I’m looking forward to representing Chip and Strutmasters.”

Team owner Dustin Davis said without a doubt; Brooks was the perfect person for the job.

“I have to say after our initial talks and now working with Aaron I can see clearly why he’s our guy.” He is a breath of fresh air, and he is extremely knowledgeable and detail-oriented. We are a rookie team in the professional ranks, but we want to compete, and I sincerely believe Aaron gives our team the best chances of winning.”

Brooks’ association with Ashley dates back to 2008 when he worked on the Funny Car owned and driven by Mike Ashley.

“I have known Aaron since I’m 13 years old when he was on my dad’s crew,” Ashley said. “Aaron is exactly what we are looking for. He’s a proven winner, a great leader and he’s got a lot of experience running different combinations.”