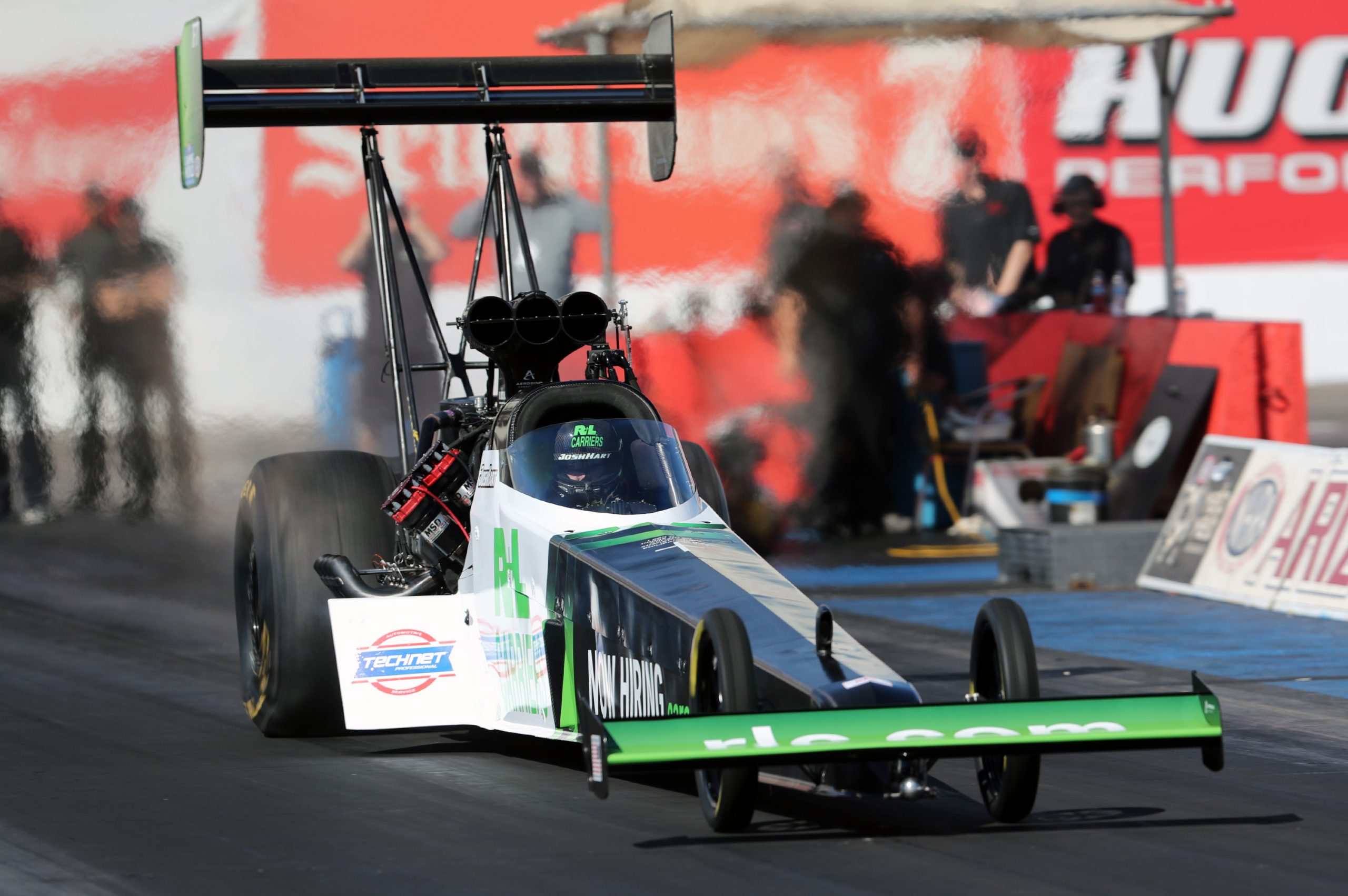 After one of the most successful rookie season debuts in the past two decades Top Fuel racer Josh Hart is looking to continue to improve and establish his team as a championship contender when the curtain goes up on the NHRA Winternationals, February 18-20, from Auto Club Raceway at Pomona. Hart won the NHRA Gatornationals in his first race behind the wheel of a Top Fuel dragster and competing on a limited schedule in 2021 raced to another win at the Carolina Nationals in the fall. He picked up four more semifinals finishes and was recognized as one of the NHRA’s top rookies of 2021. This year he will return competing for the full 22 race NHRA Camping World Drag Racing Series season with a new look R+L Carriers racecar and even more determination.

“Last year was awesome and we learned a lot,” said Hart, who was also nominated by Drag Illustrated magazine as Rookie of the Year. “I learned a lot and we made some mistakes as a team which is part of the process. This year we are hoping to minimize those mistakes. Going into a full season for the first time it will mean a lot more seat time and I think that is going to turn on more win lights.”

“I would say we are very focused heading into the start of this season. It is nice to open the cabinets and see a lot of new parts. We are getting a good handle on inventory whereas last year we were just learning the basics. I think we have a great team and all the same people stayed on board with us and that gives me a lot of confidence. Last season Ron Douglas and I became business partners in addition to his crew chief duties, so I get a good feeling from his confidence level when it comes to the performance of the racecar. From the driver’s perspective that is priceless,” added Hart.

During his breakout rookie season Hart’s two wins in 12 races put him ahead of the pace of some of the best rookie seasons in recent memory. Rookie Top Fuel drivers such as Richie Crampton and Antron Brown won twice in their rookie seasons which comprised 24 races respectively. His consistency and success at the races he attended garnered Hart attention and respect from his fellow competitors last year.

“I have been amazed by Josh ever since he got into the Top Fuel ranks,” said three-time world champion Antron Brown. “It is not just his driving ability but his mindset of how he came out here. He assembled a good team and he had instant success. I have never seen someone step into a Top Fuel dragster at their first race and come out and win it. I remember when I was a rookie in Top Fuel, we qualified No. 1 but it took us four races before we won. That was still fast, but to win at your first race that just tells you this is in his DNA.”

Hart and the R+L Carriers team spent last weekend testing at the PRO Nitro Spring Training at Wild Horse Pass Motorsports Park shaking down a brand-new Top Fuel dragster. Getting his team back in the racing groove and having seat time was critical for the young driver to get the season off to a good start. With every pass the team improved, and the racecar became more consistent giving Hart and Douglas a feeling of confidence heading to the first race of the season.

“The new car is like a Cadillac. The team has everything smoothed out for me,” said Hart. “There are still a few little adjustments to make for the driver, in particular. We will get those ironed out and we will be ready to rock. When we ended the season at Pomona last year it was sublime because it is so sentimental to everyone and there is so much history there. I am excited to race my first full season and I think starting in California at the Winternationals will be awesome.”

The 2022 NHRA season officially begins February 18 in Pomona, California, with the historic NHRA Lucas Oil NHRA Winternationals presented by ProtectTheHarvest.com. The Camping World Drag Racing Series kicks off Friday with one qualifying session for Top Fuel, Funny Car and Pro Stock, followed by two more passes Saturday and final eliminations on Sunday, February 20. The race will be televised nationally on FS1 and fans can follow Josh Hart’s progress on his social media channels on Twitter and Instagram.