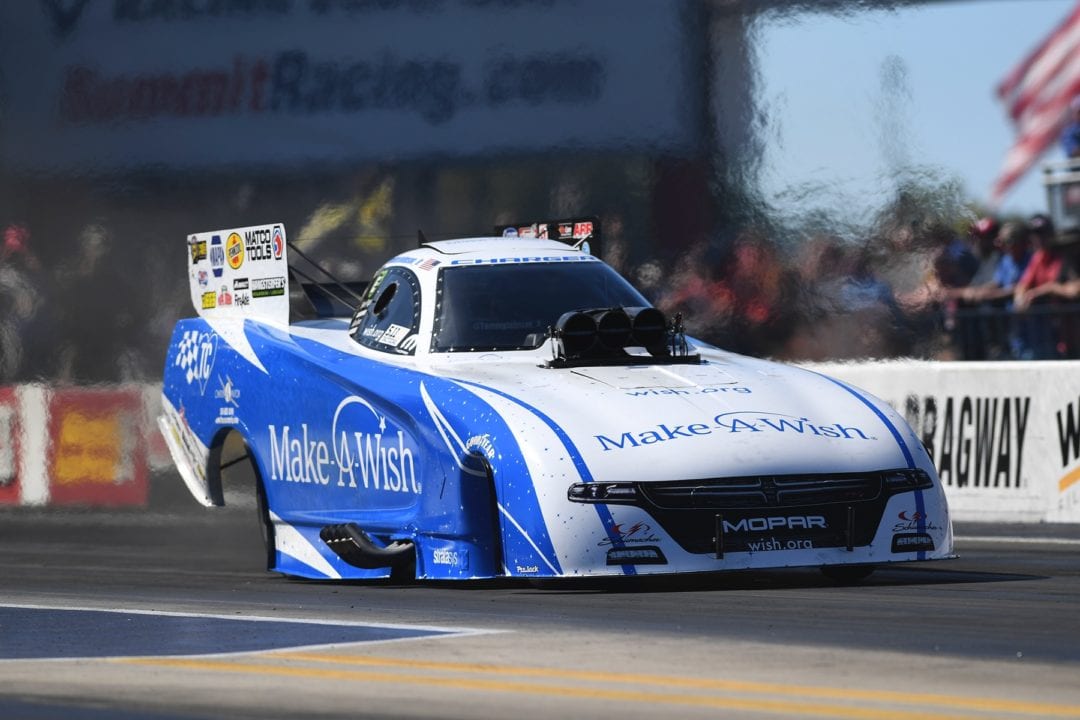 Tommy Johnson Jr. powered to the No. 1 qualifying position in Funny Car on Saturday at the 11th annual NHRA Carolina Nationals presented by WIX Filters at zMAX Dragway.

Johnson Jr., who is looking for his first win of 2018, claimed his second straight No. 1 qualifier and the 17th of his career after going 3.873 seconds at 329.10 mph in his Make-A-Wish Dodge Charger R/T during Saturday’s final qualifying session. It sets up a first-round match-up with Dave Richards for Johnson, who entered the weekend fourth in the points standings and still has visions of making a late charge for the championship.

“We’ve got a really, really good race car right now and the guys are doing such a great job,” Johnson Jr. said. “You can just see it in their confidence. I would say the only thing we have to change is semifinals (where he has lost three of the past four races). We have to fix that this weekend. We’ve had a good car for the last 6-7 races and we just keep building on it.”

Ron Capps finished second in qualifying with a 3.875 at 329.42 in his NAPA Auto Parts Dodge Charger R/T and he will race Dale Creasy Jr. to open eliminations. Points leader and defending world champion Robert Hight, who has two straight wins, qualified No. 7 in his Auto Club Chevrolet Camaro SS with a run of 3.911 at 330.31. He will meet Jack Beckman in the first round of eliminations.

Force, the defending Top Fuel world champion, picked up her second No. 1 qualifier of 2018 and 10th of her career in her Advance Auto Parts/Monster Energy dragster with a run of 3.700 at 330.72 in the final qualifying session on Saturday. The run, which gave Force the No. 1 qualifier spot at both races at zMAX Dragway this season, sets up a first-round match up with Audrey Worm as Force looks to pick up her second win of 2018 and end her year on a strong note. 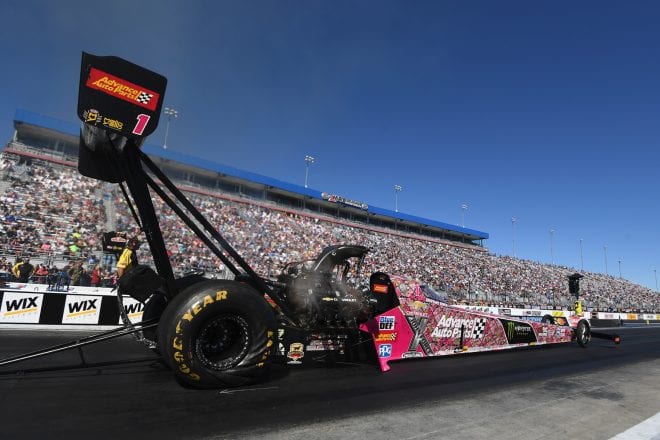 “We’re looking good going into race day,” Force said. “Our team has really been struggling this year in qualifying and we made some changes with the car the last few weekends. This weekend, I’m really hoping we’re going to turn the corner. We are happy and I have to thank all of my guys. They’ve been working around the clock and I would like to get all of us in the winner’s circle.”

Points leader and Friday’s provisional No. 1 qualifier Steve Torrence, who has won the first three events of the Countdown to the Championship and has eight wins in 2018, will start eliminations from the No. 2 position thanks to his pass of 3.704 at 331.53 in his Capco Contractors dragster. He will meet Chris Karamesines in the first round of eliminations. Clay Millican ended up third after his pass of 3.718 at 321.73 in his Parts Plus/Great Clips dragster, setting up a first-round race against Kyle Wurtzel.

Pro Stock’s Skillman grabbed his seventh career top qualifier and second in 2018 after his run of 6.509 at 211.30 during the final qualifying session on Saturday in his Ray Skillman Auto Group Chevrolet Camaro. Skillman, who is seeking his first win of 2018, will try to become the 10th different Pro Stock winner this season and matches up with Shane Tucker to open eliminations. 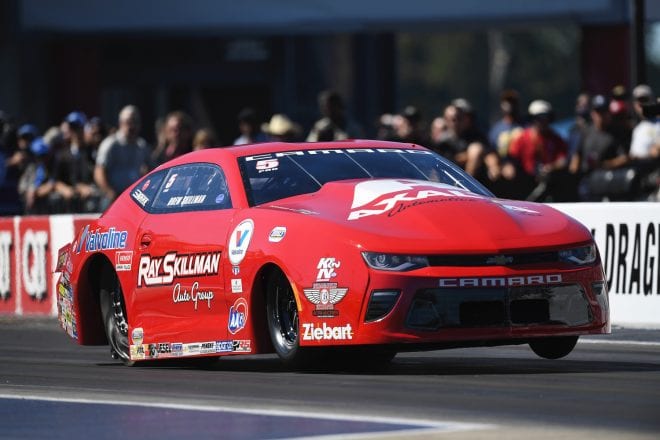 “We’re trying our best to finish as strong as we can this year,” said Skillman, who entered the weekend fourth in points. “We didn’t have the best year all year, but the racecar is really coming together at the end of the season when it needs to. We’re going to try to get three more wins this year and this is a great start. We definitely feel very comfortable here.”

Provisional top qualifier and two-time world champion Erica Enders finished second in qualifying with a run of 6.513 at 211.96 in her Melling Performance/Elite Motorsports Camaro. She will race Wally Stroupe in the first round of eliminations, while points leader Tanner Gray, who has seven wins in 2018, qualified third with a run of 6.516 at 212.33 in his Valvoline/Nova Services Camaro, setting up a first-round matchup with Alan Prusiensky.

Defending Pro Stock Motorcycle world champion Krawiec collected his fourth No. 1 qualifier of 2018 and 43rd of his career with his 6.806 at 197.83 from Friday on his Screamin’ Eagle Vance & Hines Harley-Davidson. Krawiec, who trailed points leader LE Tonglet by 47 points heading into the weekend, will look for his fifth win of the season and faces Jim Underdahl in the first round of eliminations. 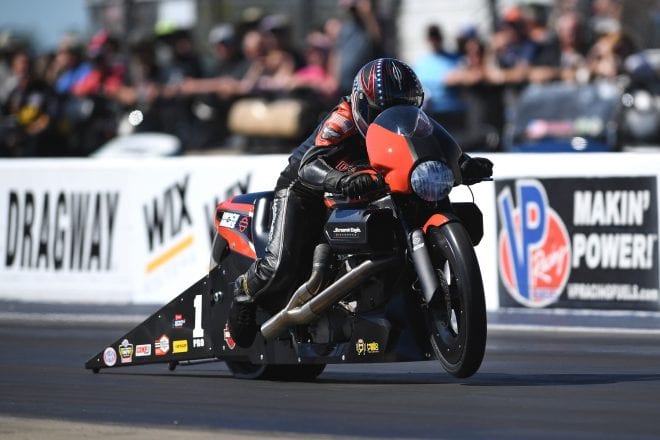 “I was fortunate enough to keep the No. 1 spot,” Krawiec said. “One of my teammates, Chip Ellis, almost knocked me off, but we were able to get it done. Rolling into tomorrow, I think it should be some good racing. It’s definitely going to be a game-changer. You have to be on this weekend and whoever comes out of here going the most rounds is probably going to be the most comfortable in this points battle. It’s do or die time, really.”

Teammate Ellis stayed second after improving to a 6.806 at 196.85 on his Screamin’ Eagle Vance & Hines Harley-Davidson on Saturday, setting up a first-round matchup with Joey Gladstone, while points leader Tonglet qualified ninth with a 6.856 at 195.90 on his Nitro Fish Racing Suzuki and will race Angelle Sampey to open eliminations.

Eliminations for the NHRA Carolina Nationals presented by WIX Filters begin at 12 p.m. on Sunday.