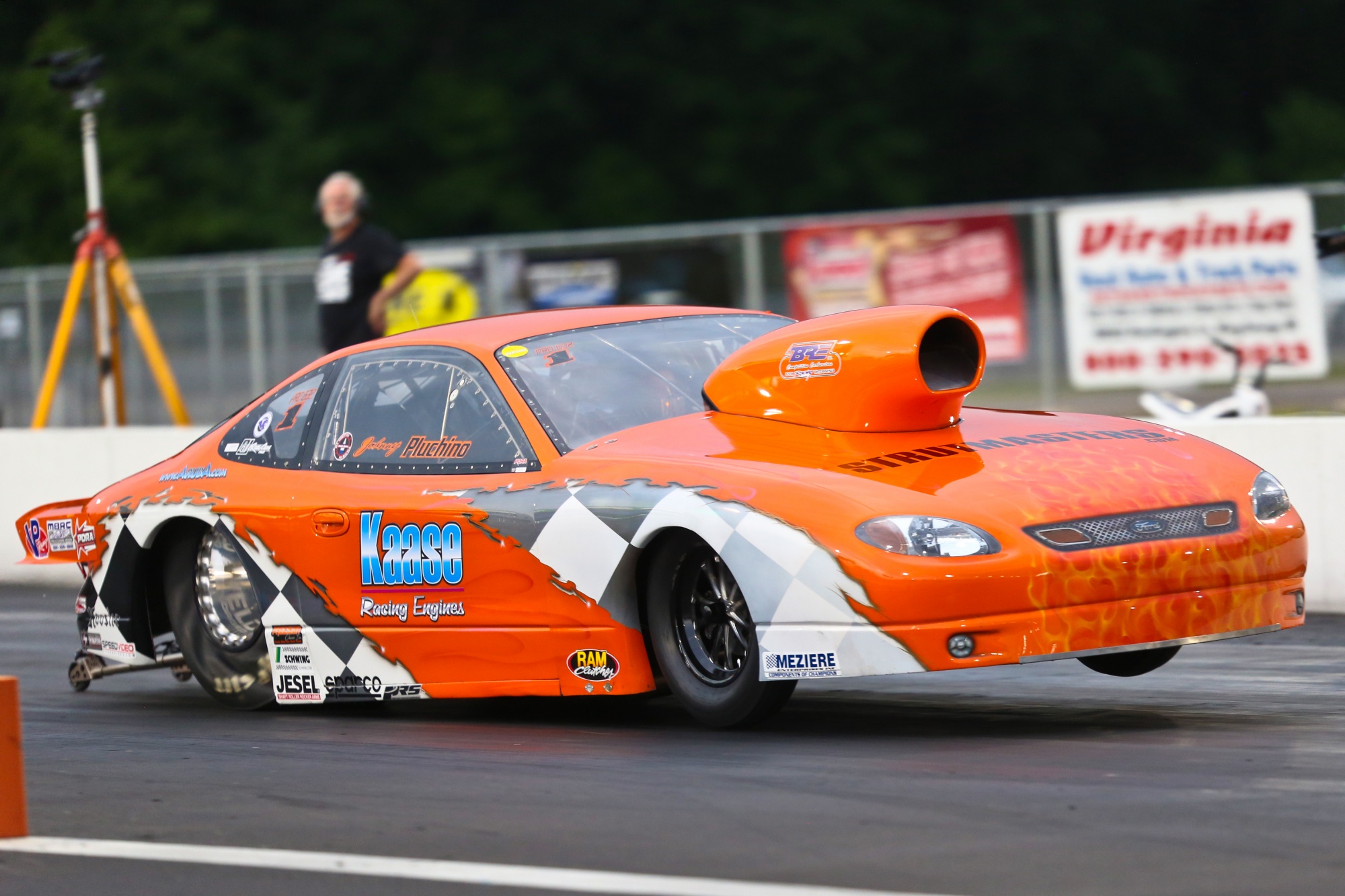 With a resurgence of nitrous-assisted cars and a rules change impacting his naturally aspirated combination, Johnny Pluchino knew he would have his hands full defending his Professional Drag Racers Association (PDRA) Pro Outlaw 632 world championship this season.

Pluchino and his New York-based team, led by his father, John, doubled down their efforts, though, and managed to clinch the 2019 Schwing America Pro Outlaw 632 presented by East Side Auto Transport and Precision Chassis world championship in dramatic fashion during the Brian Olson Memorial World Finals presented by ProLine Racing and $hameless Racing at Virginia Motorsports Park in October.

Last season, the second-generation driver won his title decisively, setting a class record, qualifying No. 1 four times and winning two races along the way. He realized this season’s road to the championship would be different, with drivers like Wes Distefano and his nitrous-assisted $hameless Racing ’68 Camaro gearing up to knock Pluchino and car owner Dominic Addeo’s Kaase-powered Strutmasters.com ’06 Ford Escort off the throne.

“We knew we had to just step our game up in order to still be competitive,” Pluchino said. “Our advantage was we had runs under our belt. We had a combination that was already worked out, and we worked that out in 2018 so we could be more consistent in 2019. The name of the game was win every round you’re supposed to win and you’re going to have to come out on top on those tight rounds because we weren’t going to be able to be out in front anymore.”

Another tense battle with Distefano followed at the Summer Nationals presented by Lithium Pros at South Georgia Motorsports Park in late June. Racing in hot, muggy conditions with an extra 50 pounds added to his combination, Pluchino managed to exceed his own expectations for the event. He defeated Chris Holdorf in his nitrous-assisted C&C Pumping Services ’53 Corvette in the final round after beating Distefano on a holeshot by just .001 in a side-by-side 4.28-second semifinal match.

“That was a huge, huge round,” Pluchino said, “because the difference of me going out and winning that race on a holeshot versus him winning that race would’ve been a four-round swing, and that really would’ve changed things going into the end of the year.”

The points earned at South Georgia did end up saving Pluchino, as he ended up going red by .007 in the opening round of eliminations at the Fall Nationals presented by $hameless Racing at Darlington Dragway in early October.

“After that happened, I was really bummed because the way Distefano was running, there was no stopping him at that race,” Pluchino said. “After everything we accomplished all year long to put ourselves in a chance to close it out right there, that just set us completely back. Honestly, I was completely bummed between Darlington and Virginia. I felt like that one round might’ve really cost me the championship, but luckily it didn’t turn out that way.”

Distefano went on to win the Fall Nationals, leaving Pluchino with exactly two rounds’ worth of points ahead going into the World Finals.

“When you go in like that, you know qualifying points are huge, so we went out and made a good run and he was having trouble all day in qualifying,” said Pluchino, who added three points to his lead in qualifying. “That made the difference in whether it would be an additional round or not.”

Distefano was defeated by Holdorf in the first round, while Pluchino took out Holdorf’s teammate, Walter Lannigan Jr. That set up a semifinal round meeting with Gillig, who Pluchino beat on a holeshot in a 4.244-to-4.242 race, sealing up his second PDRA world championship.

“I really enjoyed winning it like that rather than sitting on the sidelines and having someone else lose it,” Pluchino said. “I always want destiny in my own hands. I always want to have the ball with 10 seconds left in the fourth quarter. It’s nice closing it out like that. It felt really good. The whole thing came together. It was a little bit more dramatic than we would’ve liked with Darlington being a bummer, but there’s no complaints when you got a ring at the end of the year.”

Pluchino’s championship effort was made more impressive by the fact that he pulled double duty in his father’s Strutmasters.com Extreme Pro Stock ’13 Mustang at four of the six PDRA races with Pro Outlaw 632. He even rebounded from his first-round red light in Pro Outlaw 632 at Darlington by racing to the final round in Extreme Pro Stock.

Pluchino handled the challenge well, but he admitted it wasn’t easy to go back and forth between the two cars. While they’re both naturally aspirated, Ram clutch-equipped doorslammers, the two have enough differences to make it a challenge.

“It’s hard to really fine-tune your craft when you’re going back and forth 10-20 minutes apart, when you just made a run in one car and you’re going into a car that’s a little bit different,” Pluchino said. “At the end of the day, it probably made me a better driver. It made me focus more on the little details when I get in each car instead of taking them for granted, but as far as going out and winning the championship, I don’t think it made it any easier, that’s for sure.”

Pluchino and the other 2019 PDRA world champions will be honored at the annual PDRA Awards Banquet during the Performance Racing Industry (PRI) Show weekend in Indianapolis, Saturday, Dec. 14.