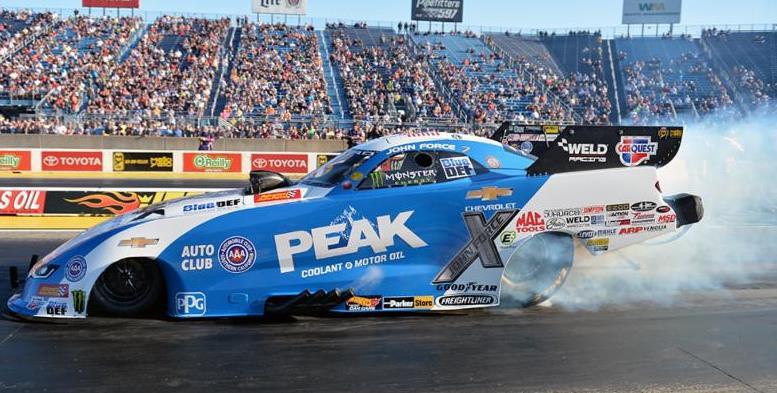 Despite the effects of a violent crash during the qualifying phase of last week’s Route 66 Nationals in Chicago, John Force can’t wait to climb back into his PEAK Coolant and Motor Oil Chevrolet Camaro SS at this week’s Virginia Nationals at Virginia Motorsports Park outside Richmond.
“It was tough, physically,” the 16-time NHRA Funny Car champion said of racing to the semifinals at Chicago after crashing the day before. “They checked me out and there was nothing broken. I’m just sore, all bummed up in the shoulders. I hit the wall really hard like three times, but I’ll be fine.
“I’m excited about going to back to Richmond,” said the founder and CEO of John Force Racing. “It’s a great motorsports market and it’s really great that the NHRA is going back there (after a nine-year absence). I’ve won races there before but going back now is kind of personal because it’s the last race Eric Medlen won before he passed away.”
Medlen, the first young driver developed through JFR’s Next Generation initiative, won six races as Force’s Funny Car teammate including the 2006 Virginia Nationals. He succumbed to injuries suffered in a testing accident in March, 2007. Force, meanwhile, won at Virginia in 1995, 1996, 1999 and 2000.
Regarding his decision to race last week despite the obvious discomfort, Force said it was a no-brainer.
“I had a goal. I thought we could win the race,” said the 148-time tour winner. “We just didn’t get it done. The good thing is I’m back in the Top 10 (by a single point) and we’ve still got nine races to go (before the start of the Countdown to the Championship).”
At 69, Force still believes he can compete in a series in which he once enjoyed total domination (winning 10 consecutive championships from 1993 through 2002). Although he has struggled to start the current campaign, the International Motorsports Hall of Fame member has not lost confidence in either himself or a young crew led by crew chief John Schafer.
“My car is starting to act like a race car again,” he said, “and these young kids, they worked all night in Chicago to put a (back-up) car together after I totaled the other one. They’ve got heart. You can teach everything else, but you can’t teach someone to love what they do.
“Courtney and Robert have had success (this year) but without a doubt I know I am getting closer,” Force said, referencing teammates Courtney Force and Robert Hight, currently first and third, respectively, in the driver standings. “I’ve been going through some struggles, but we’re seeing improvement every day.”
As he has during every “down” time in his more than 40-year career, Force has drawn inspiration this season from the fans. That’s another reason he’s glad the tour is headed back to Virginia.
“The fans in Richmond and across Virginia have always been unbelievable,” he said. “When we used to race there, we would have fans on the ropes from all over the east coast and they were great. So, I’m looking forward to getting back there and seeing some old friends and winning some rounds.”
With his 750th NHRA event appearance not far away, Force has drawn inspiration from an unlikely source — his grandkids, Autumn Hight and Jacob Hood, with whom he recently spent time racing Jr. Dragsters at Barona, Calif., where they celebrated Autumn’s first win.
“In Autumn and Jacob, I saw myself again, younger, dreaming the dream,” he said, “and I came out of there with a different heart. I really do love what I do and I don’t care what they say, I can still do it.”
Nitro qualifying for the Virginia Nationals will begin on Friday with sessions at 3:30 and 6 p.m. and continue Saturday at 1:30 and 4 p.m. Single elimination finals will begin at noon Sunday.