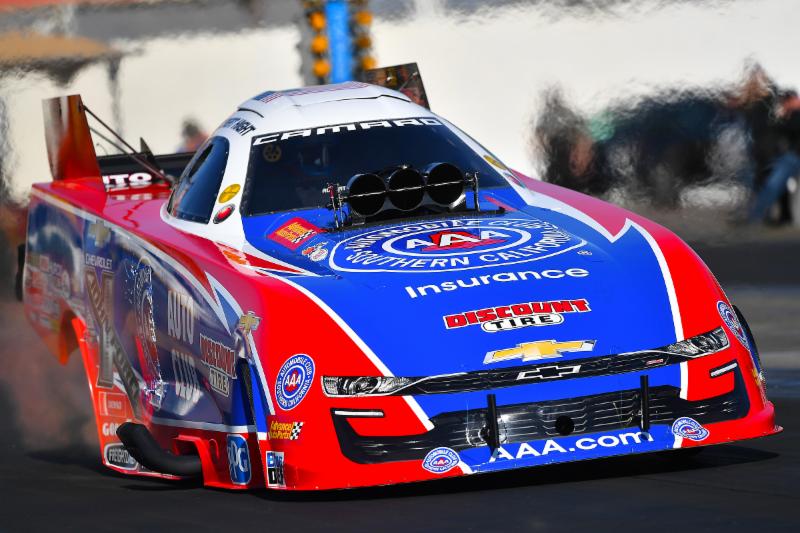 After four days of testing at Wild Horse Pass Motorsports Park outside Phoenix, the three full-time hot rods of John Force Racing were able to put their hard work during the off-season to good use. Robert Hight led the Funny Car class with a trio of impressive runs on Friday, John Force saved the best for last with a solid run to close out the test session and Brittany Force combined with her new team to leave testing ready for Pomona.

Hight, a two-time world champion who finished 2018 second in the NHRA Mello Yello points standings, laid down his best runs of the test session on Friday. He and crew chiefs Jimmy Prock and Chris Cunningham opened the day with a 3.863-second pass at 326.87 mph that set the bar high for the category. He followed with a 3.914 at 323.35 and a 3.909 at 319.60 in his Auto Club of Southern California Chevy Camaro. The speed and ET national record holder will head into the start of the 2019 season having not missed a beat through the off season. 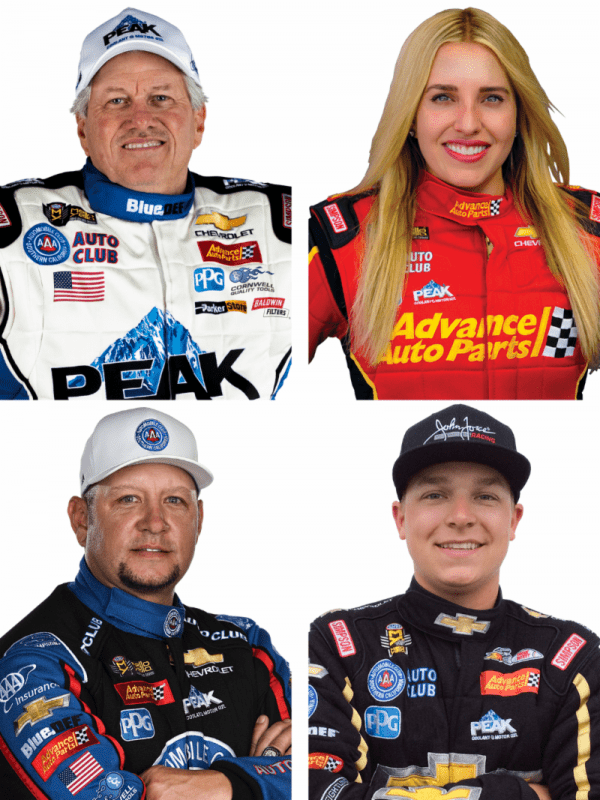 “We’re feeling really good after four days of testing. Jimmy and Chris have this Auto Club Chevy figured out. We’re carrying over our momentum from last year,” said Hight. “We were testing some things, but Friday was a really good day for us. I’m excited to head to Pomona and get the 2019 season started.”

Team owner and namesake John Force closed out his test session with the best run of the week for the PEAK Coolant and Motor Oil Chevy Camaro. A 3.894-second pass at 331.61 mph put the 16-time champ in the upper echelon of the Funny Car category. Force was fairly consistent throughout the week with a 3.942 at 311.13 on Thursday and a 3.984 at 311.85 on Friday, a good sign for the Funny Car legend and his new team headed by Brian Corradi and Dan Hood.

“I was on the phone with Courtney and she’s teaching me how to drive this car. It’s a little different and the guys starting the car and how they do on the starting line, it’s all fun stuff,” said Force. “She has really helped me and I know she’s missing it out here, especially her team but I’m happy she’ll be at Pomona. She’s helped me so I ran okay. We’ll be ready to go at Pomona.”

“We have great sponsors with Auto Club, Advanced Auto Parts, Chevrolet and Peak Auto. We have some new ones on board this year with DENSO, Cornwell Tools, Baldwin Filters and Pit Boss Grills. The 2018 season was a tough year with breakage and crashes. This is the first time in testing that we haven’t hurt any parts yet, knock on wood,” added Force.

Sporting her new Advance Auto Parts colors, Brittany Force and new crew chiefs David Grubnic and Mac Savage took things slow as the team got acquainted. Force made a number of good runs to half-track and beyond with her best pass of the week coming in at 3.700-seconds at 321.27 mph. The Advance Auto Parts team worked their way up to the stout showing while learning all they could in the first half of the track and saw nothing but positive signs that 2019 will be a good year for the 2017 Top Fuel champ.

“Testing went well for us. It was good to get out to a race track and get to be with my new team and get to know my new car,” said Force. “We got the information we were looking for and Grubnic seemed happy with our test week. I’m looking forward to getting out to Pomona, it’s the first race of the season, it’s a home race and it will be exciting to show off this new Advance Auto Parts dragster to all the fans.”

John Force Racing’s fourth team made an appearance at the end of the test session. After spending the off season preparing for the potential to run a Funny Car or Top Fuel dragster, Austin Prock along with crew chiefs Jon Schaffer and Ronnie Thompson made it out to testing on Saturday with plans to make passes in the dragster and potentially the Funny Car.

“They got locked in the snow in Indy and had to work over time to get the bodies fitted and get the cars ready to go,” said Force. “We’re still out here looking for a sponsor, I’ve even called on one of the greatest Top Fuel and Funny Car drivers in history, Don Prudhomme for help. Everybody is trying. We’ve got some leads but we’re getting Prock some seat time and getting him used to the brand-new car that we built him. It’s all part of the NHRA rules.”

“I’m excited to be out at testing and get some more laps under my belt. I know Force is working hard to get us a sponsor and get on us on the 2019 NHRA circuit and I’m just trying to do my part and make sure I’m ready when the time comes,” said Prock. “It’s hectic and stressful but we’re having fun. Glad to be out here with Jon Schaffer and Ronnie Thompson and I know Force and Robert will be out here to support and make sure things run smooth too.”