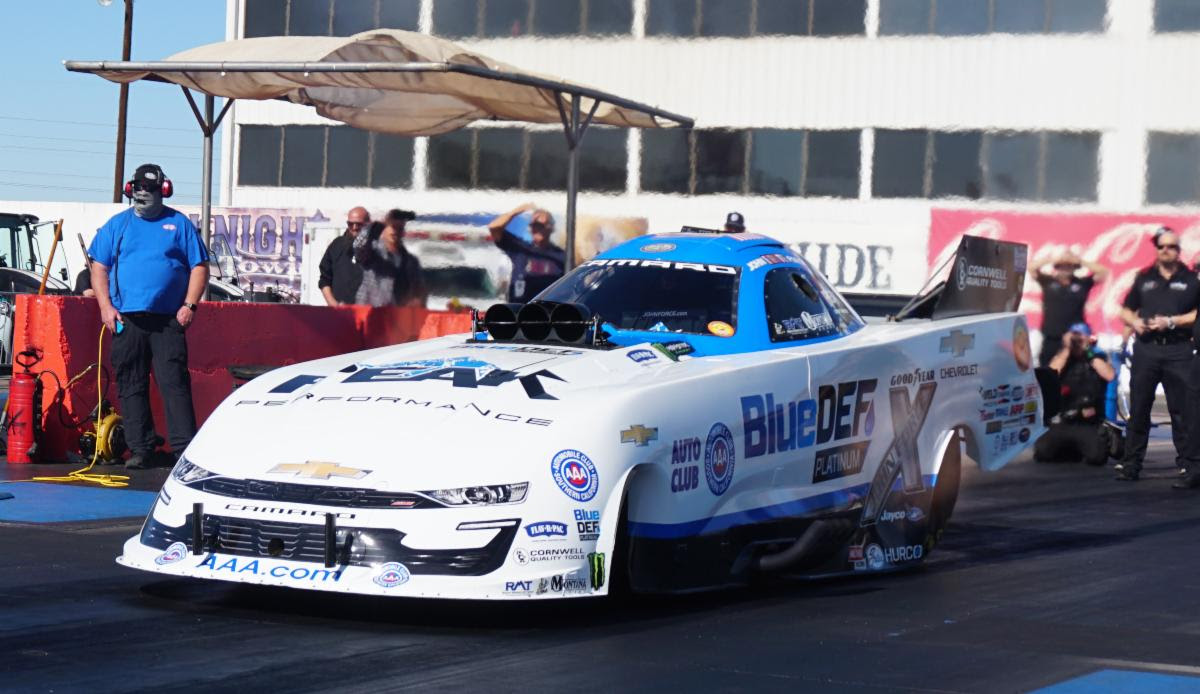 Sixteen-time Funny Car world champion John Force led the four-car team with a series of four back-to-back runs in the 3.8s. After making a few planned shut-off passes on Thursday, Force and his Danny Hood and Tim Fabrisi tuned PEAK BlueDEF PLATINUM Chevrolet Camaro SS team laid down a 3.889-second pass at 321.88 mph on Friday followed by a 3.888 at 327.51. The momentum continued into Saturday’s test runs with Force handling his hot rod to an impressive 3.836-second run at 335.4 mph on Saturday morning. In the heat of the day, the PEAK BlueDEF team landed a 3.890 at 326.16 so close out their test session.

“It’s great to back out here, back in the seat, back with my team, Danny Hood, Tim Fabrisi, all these young kids, it was a good couple of days,” said Force. “Four runs in the 3.8s for this PEAK Chevy, that’s really something, that makes you feel good going into the season opener. I’m feeling like everything is falling back into place. The problems, they’re figuring themselves out, we got Austin Prock back in a seat, Montana Brand back. Brittany over there with Monster and Flav-R-Pac for a couple more years, Robert with Auto Club and bringing on Powers Solar. I feel good being out here, I want to race, that’s why I’m here. I’m ready to get going.”

Brittany Force and the Monster Energy / Flav-R-Pac team took full advantage of the test session. Crew chiefs David Grubnic and Mac Savage tested various engine combinations looking to add to the performance they had in 2021. The team made nine attempts with planned shutoffs that showed quality early numbers including .816-seconds at 60 ft. and 2.075 at 330 ft.

“It’s good to be back with my Monster Energy / Flav-R-Pac team out here at Wild Horse Pass doing some pre-season testing before Pomona kicks off in another week,” said Force. “We made nine runs throughout the three days. It was a little bit of a struggle, but we are testing a lot of different things. Our early numbers were great and we’re happy overall with how our testing went and we’re ready to get to Pomona.”

Robert Hight and the Automobile Club of Southern California Chevrolet Camaro SS team were the first to make a full pass at Wild Horse Pass Motorsports Park. The championship crew chief tandem of Jimmy Prock and Chris Cunningham wasted no time and went to 1,000 feet in their first attempt on Thursday morning. The Auto Club Chevy put up a 3.911-second pass at 323.11 mph to lead the Funny Cars. On Friday, Hight came in second quickest with a 3.879 pass at 331.26 mph The three-time champs closed things out with a solid 3.864 at 334.82.

“It was great being back out in the Auto Club Chevy, back with my team, Jimmy Prock and Chris Cunningham,” said Hight. “We had to put in some hard work but ultimately we’re ready to get this season started. We don’t want a repeat of last year and we’re all on the same page. I think it’s going to be a good year. Jimmy coming out right away with a full pass, that’s how you know, he’s confident. We had some good runs, learned some things and now it’s time to get things going. I’m excited.”

Making his return to the Top Fuel ranks, Austin Prock made two promising passes on the final day of testing. With a new team, new crew chief duo of Joe Barlam and Rahn Tobler and nearly two years out of the seat, the 2019 rooking of the year took the first two days of testing to get comfortable not just in the seat but with the team as well. An impressive final day of testing can squash any doubts of the Montana Brand / Rocky Mountain Twist dragster not being a contender this season. In the heat, Prock went 3.73-seconds at 327 mph and followed it up with a stout 3.685 at 333.66 mph in the afternoon under slightly cooler conditions.

“After today, I’m feeling pretty good. We had some bugs to work out the first two days; we have new crew chiefs, new crew and obviously I sat out almost two years,” said Prock. “With today’s results, I’m really looking forward to Pomona. We made two really solid passes, one in the heat and one when the track was cooler. I’m getting more comfortable every lap and starting to become myself again. Everyone did a really great job. Huge thanks to Joe Barlam and Rahn Tobler and all my guys for really working hard these past four weeks.”