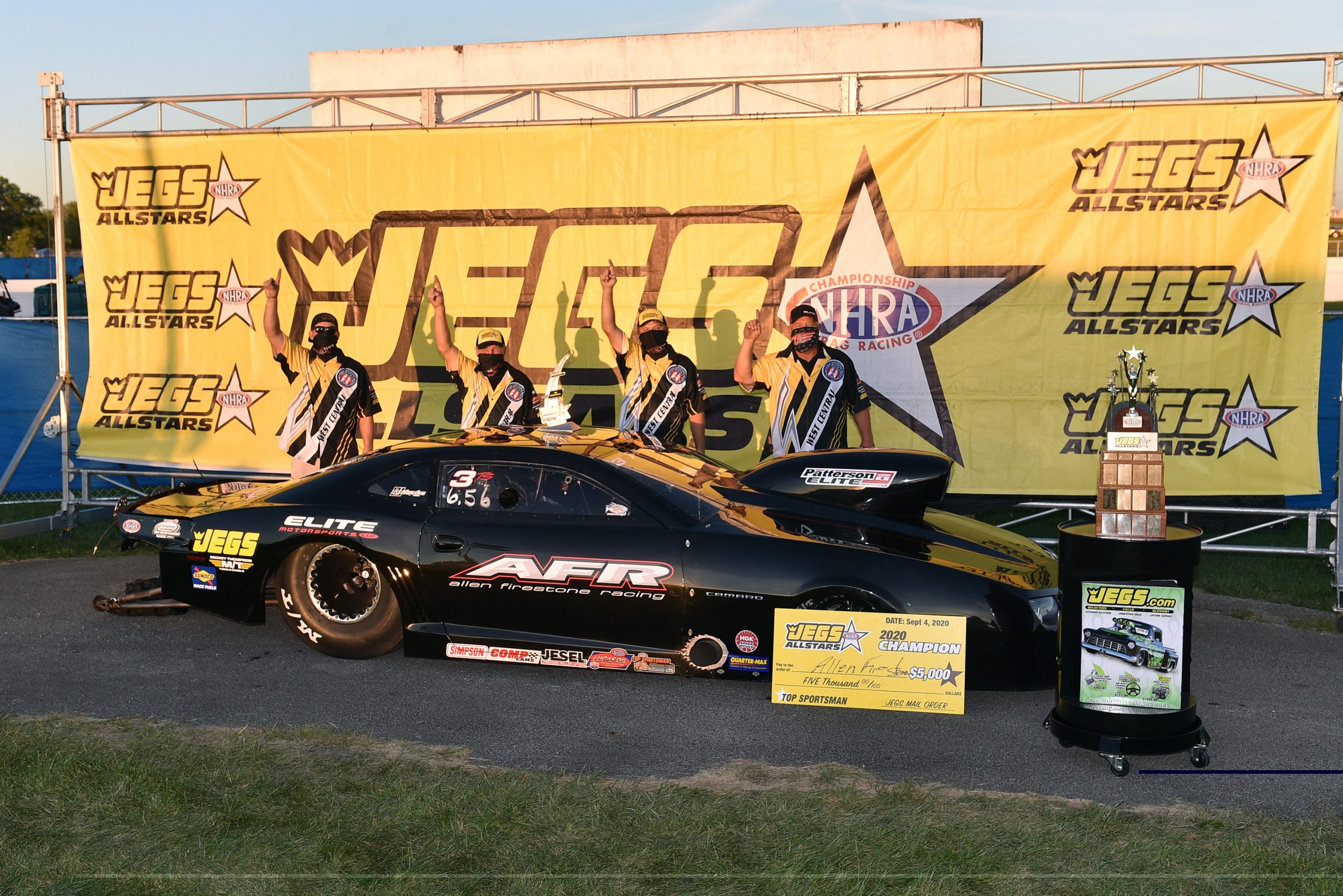 Last year, the JEGS Allstars race found a new home when it moved to historic Lucas Oil Raceway in Indianapolis. Held during the Dodge SRT U.S. Nationals, NHRA’s oldest and most prestigious event, the pairing proved to be a successful one with Indy proving to be the perfect host for the JEGS Allstars race, which celebrates its 37th year in 2021.

This week, the best Sportsman racers from across NHRA’s seven geographic divisions will return to Indianapolis for the special event that crowns both an overall team champion and individual winners in 10 separate eliminators.

For the 80 racers who have qualified for the special event, winning an individual title at the JEGS Allstars race is a tremendous achievement, but being a part of the winning team is an extra-special accomplishment, particularly on the hallowed grounds of Lucas Oil Raceway, which has been home to the U.S. Nationals since 1961.

Last year, the team from the West Central Division turned in a dominant performance to win their third overall title in the last seven seasons. The Division 5 crew also won titles in 2014 and 2016.

A highlight of each season since the inaugural event in 1985, the JEGS Allstars event features a total purse of more than $150,000, making it one of the richest events of its kind.

Four women have qualified for this year’s JEGS Allstars team including Jackie Fricke and Julie Nataas in Top Alcohol Dragster, Randi Lynn Shipp in Stock, and Alison Prose in Super Street. Nataas and Shipp are fresh off wins in last week’s Division 3 event in Bowling Green, Ky., while Fricke also earned a recent win at the Division 1 race in Reading, Pa.

The Top Alcohol Funny Car class also delivers a stacked line-up, although the only driver in the field who has previously won a JEGS Allstars title is Ray Drew from the Central Region team, who is unbeaten in his last two starts. The Top Alcohol categories compete for their own championship, separate from the eight other eliminators.

The Southeast Division team has enjoyed tremendous success at the Allstars with their most recent title coming in 2015. This year, their hopes are pinned on Bertozzi, Super Comp ace Ray Miller III, and veteran Stock racer Jeff Hairrington.

The North Central squad will be looking to garner their ninth win and they have all the weapons necessary to do it including past Super Stock world champ Ricky Decker, first-time Comp qualifier Ronnie Bohn, and Shipp, who is a seven-time national event winner.

The gang from the Pacific Division, who last claimed the overall title in 2012, will be looking to regain the top spot and there is no reason to think they won’t be able to with a core group that includes current championship contender Joe Mozeris in Comp, Kyle Rizzoli in Super Stock, and longtime class racer Steve Wann in Stock.

Any racer who can win Saturday’s JEGS Allstar title and then return on Sunday to win the Dodge SRT U.S. Nationals in the same class will be eligible for the JEGS “double-up” bonus.

The racers in the JEGS Allstars event will be competing for a share of more than $150,000 in cash awards posted by JEGS Mail Order. The overall team champions will split a $20,000 bonus. In addition, there are close to $50,000 in manufacturer posted contingency awards available to the finalists this year.

Any driver who can win the JEGS Allstars on Saturday and then return to win the Dodge/SRT U.S. Nationals title the following day will automatically be eligible for a “double-up” bonus from JEGS Mail Order.

Since 1985, the JEGS Allstars has been contested in four locations; Bowling Green, Ky., Indianapolis, Ind., Columbus, Ohio, and Joliet, Ill.

There are four women in this year’s JEGS Allstars field. Defending event champion Jackie Fricke will compete in Top Alcohol Dragster, where she is joined by Julie Nataas. Randi Lynn Shipp will represent the Division 3 team in Stock while Alison Prose is also representing Division 3 in Super Street.

The only driver to double-up at a JEGS Allstars race is Trevor Larson, who won the Super Comp and Super Gas titles in 2015. Larson also won in 2020, and has returned as the blocker.

Defending Super Stock champ Kyle Rizzoli, who returns this season as a blocker, is the son of Jim Rizzoli, who won the 1992 JEGS Allstars Top Alcohol Dragster title.

JEGS Allstars By The Numbers

13 — World champions in this year’s field

37 — Years for the JEGS Allstars competition