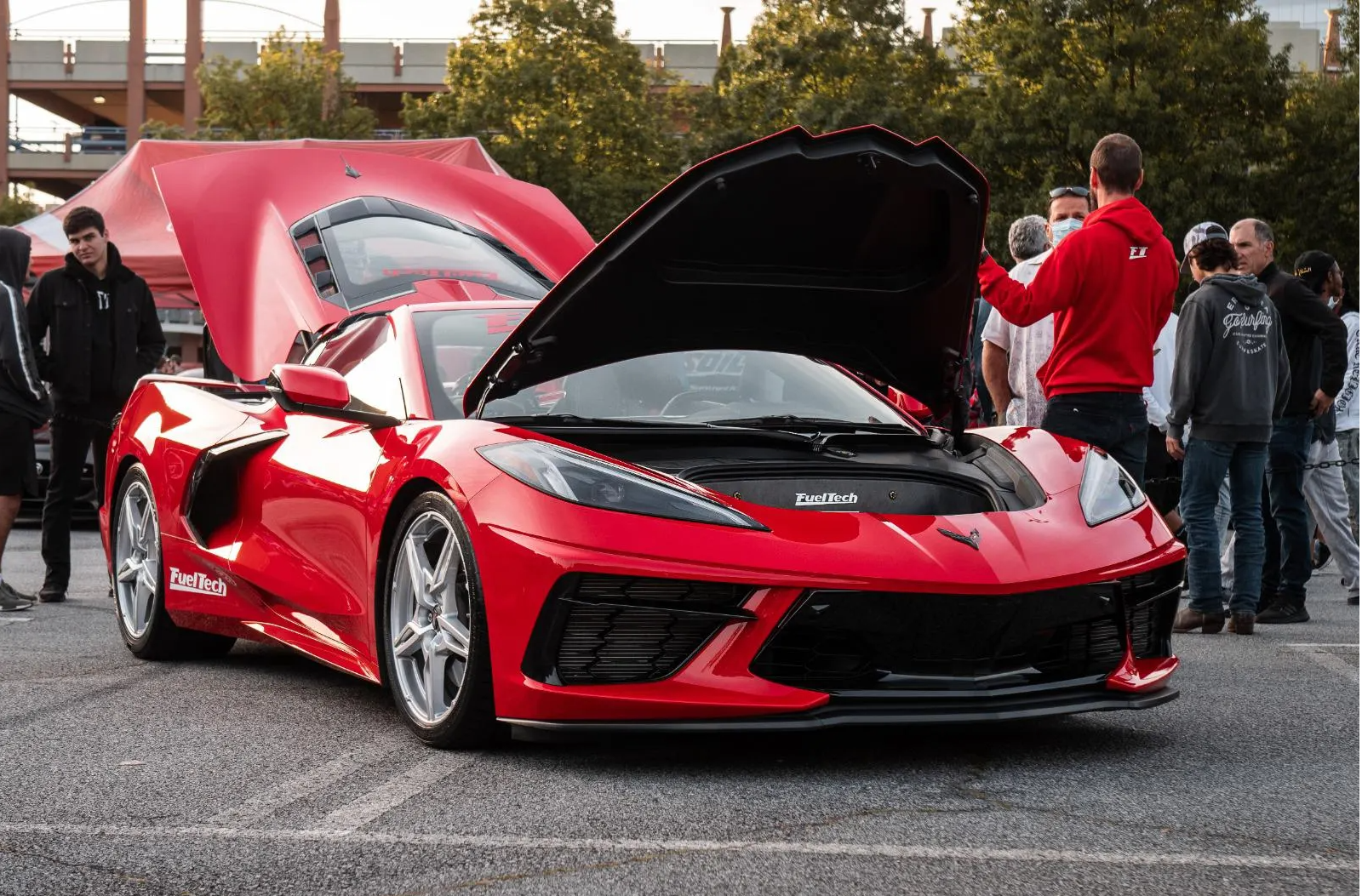 The Internet buzzed with excitement last month when FuelTech revealed its latest R&D project, a 2020 Corvette that produces 754whp, an output level that was held back by a slipping clutch and has the potential to top 1200whp. The multi-national technology company integrated its FT600 engine management system with the factory ECU (PCM) and TCU (Transmission Control Unit) to create a seamless solution for ultimate control over the twin turbocharged LT2 engine combination without hacking into the factory ECU. Here is the story behind the project as FuelTech blends its championship-winning, record setting electronic technology into the C8 Corvette.

Observers will instantly see the power-making capabilities of the FuelTech C8 Corvette when walking up to the back of the vehicle. A pair of Garrett turbochargers is highly visible through the back window as they are perched above the mid-mounted LT2 small-block Chevy engine. According to Anderson Dick, founder and CEO of FuelTech, the reason for the turbocharger placement was ease of installation along with the fresh air provided by the massive vents that flank the rear window. The top-mounted turbo kit was one of just several potential mounting points, giving car builders and enthusiasts quite a bit of freedom to put their own style on the setup.

In the video Anderson explains FuelTech’s highly successful drag racing programs in Sport Compact and the domestic-based door-slammer segments. It is through that success—at the highest level of motorsports—that has prepared the company’s PowerFT engine management systems to be capable of piggybacking on to one of Chevrolet’s most advanced vehicles in its line-up. Beginning with a clean sheet of paper wasn’t easy but worth the efforts since FuelTech will be building a user-friendly plug-and-play setup for speed shops and enthusiasts.

Opening the engine compartment reveals the FuelTech jumper system that uses Port Injection and a custom sheetmetal LT2 intake manifold. The engine relies on the Direct Injection system for regular driving, not upsetting or disrupting the factory ECU’s functions. The FuelTech FT600 engine management system comes to life when the LT2 engine starts to see boost. As a side note, the folks at Pro Line Racing added a set of Diamond forged pistons and robust connecting rods from Gwatney Performance to handle the higher horsepower.

The FT600 has complete control over a secondary fuel system that feeds the Port Injection, providing a smooth and seamless operation. A fuel cell has been mounted in the front trunk of the C8 Corvette and is fitted with an Aeromotive 5 GPM spur-gear electric fuel pump. The FT600 handles the variable control of the pump, cutting down on the excessive noise during everyday driving but allowing it to come online when the situation calls for it. In this application the fuel pump kicks on shortly before the engine sees boost, quickly stabilizing the fuel pressure before it is spiked. The Corvette consumes a healthy diet of pump gas or VP Racing Fuels MS100 in the factory fuel system while the secondary setup utilizes VP Racing Fuels M1.

Using an FT600 on the C8 Corvette created several opportunities to make big power and also work around the limiting factors of the PCM. One of the advantages to the FT600 is the suite of sensors that provide data for the tuner to properly dial-in the fuel and timing curves.

For this project FuelTech added two WB-02 Nano sensors, one for each engine bank as well as eight EGT sensors using two EGT-4 four channel conditions to read the exhaust gas temperature for each cylinder. These references allow the calibration expert to have ultimate control over the fuel supplement system for the perfect air/fuel ratio and perfect the transition from Direct Injection to Port Injection. This vehicle is also equipped with a fuel level sender on the secondary fuel cell so the user can monitor methanol levels on the LCD screen that is integrated into the FT600 ECU.

All PowerFT engine management systems include a boost controller that is programmable through time-, rpm-, or wheel-speed based parameters. The PowerFT engine management systems also include a nitrous controller, traction control, and other industry-leading functions. Additionally, the FT600 is all over the Garrett G35-900 (62mm/62mm) mirror-image turbochargers. On the front side are impeller speed sensors for each turbocharger while the exhaust sides use FuelTech Dampening Canister backpressure sensors. It is a data overload for most users, but the development team can analyze as much data as possible when the C8 Corvette is an R&D vehicle. The data is available to view on the LCD screen, which is mounted in the cup holder using a custom panel, or available for download to the FTManager software.

The road doesn’t stop with the plug-and-play jumper harness as FuelTech continues to develop CAN bus connections with more OEM sensors and systems within the C8 Corvette platform. The company is also working with third party companies on drivetrain solutions as well as TCU control. Under a load the DCT slips around the 750whp mark and to achieve higher numbers they will need to increase clutch pressure in those scenarios. Once they unlock those capabilities in addition to stronger drivetrain parts, FuelTech expects to push their R&D vehicle to over 1,200whp reliably and safely.

You can find out more details about this amazing project by clicking HERE!