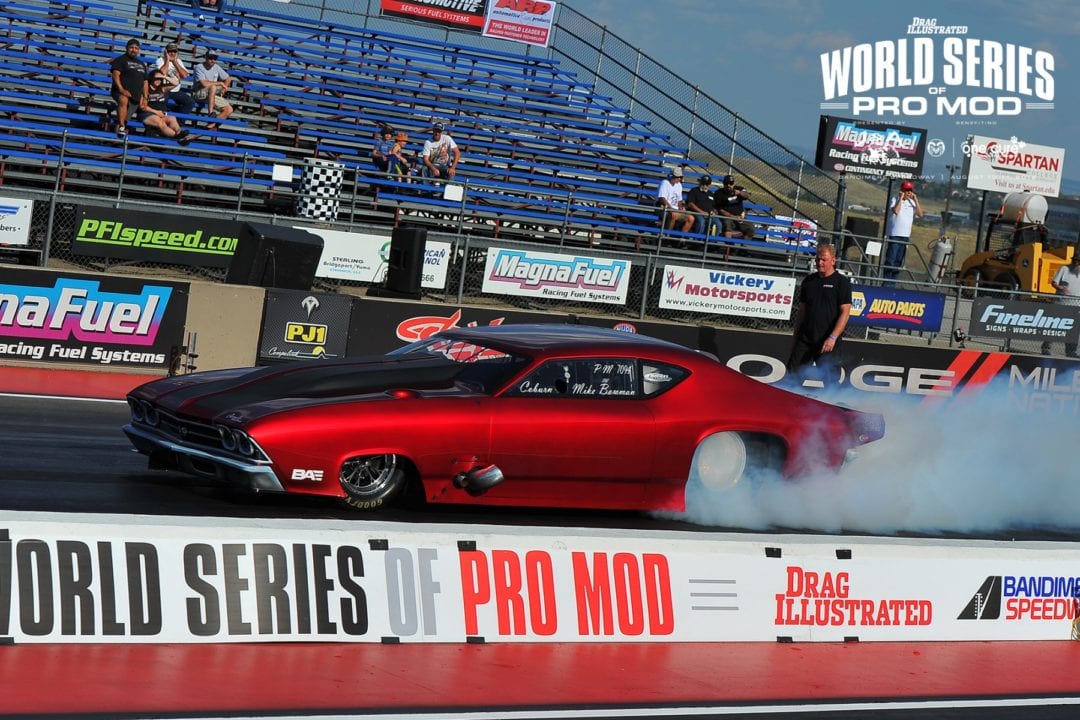 Mike Bowman thought he was moving on after making his best-ever pass at Bandimere Speedway. Instead, his quest for a second straight DRAG ILLUSTRATED World Series of Pro Mod title ended in an incredibly close quarterfinal match-up against Carl Stevens Jr.

In fact, it was so close Bowman thought he was heading to the semifinals in his turbocharged Chevelle.

“I seriously thought I beat him,” Bowman said. “It was so close. What a great race. I was pulling on him and I thought I would catch him. It was an awesome race and I feel good about the weekend. It was close.”

It was a side-by-side race that had everyone buzzing on Thunder Mountain, as the all-turbo matchup was a race that will stand as one of the highlights from the 2018 World Series of Pro Mod.

A second straight win wasn’t meant to be, but Bowman had plenty smile about regarding his performance this weekend. He went 5.985 to beat Derek Menholt in the first round, running 5.915 at 242.32 in round two to beat Jeremy Ray, who went red.

He was shooting for a 5.87 in the matchup against Stevens, but just getting to the event was big for Bowman. His Chevelle got finished for the WSOPM just in time, as Bowman’s team spent several days at Jerry Bickel Race Cars getting the car put back together. It was an impressive display by the staff at JBRC and Bowman’s team, but there was an underlying theme behind it all.

“It was really important that we not only make it here, but to also run well,” Bowman said. “We accomplished that so I’m happy about that. It was super important to be here and I didn’t care what it took.”

The other positive was even though Bowman went home with $100,000 less than he did last year, the 2018 World Series of Pro Mod was just as enjoyable.

His best-ever pass on Thunder Mountain came in the run against Stevens and the entire vibe of the race continues to be a huge draw for Bowman.

Even in defeat, he has plenty of momentum going into the rest of the year, building into what he hopes is a second win at the 2019 WSOPM.

“The event was awesome. It was just as much fun as last year,” Bowman said. “It was a great event, a great time and I’ll try to win it again next year. I wanted to put on a good show and I did that. I was leaps and bounds better than last year.”