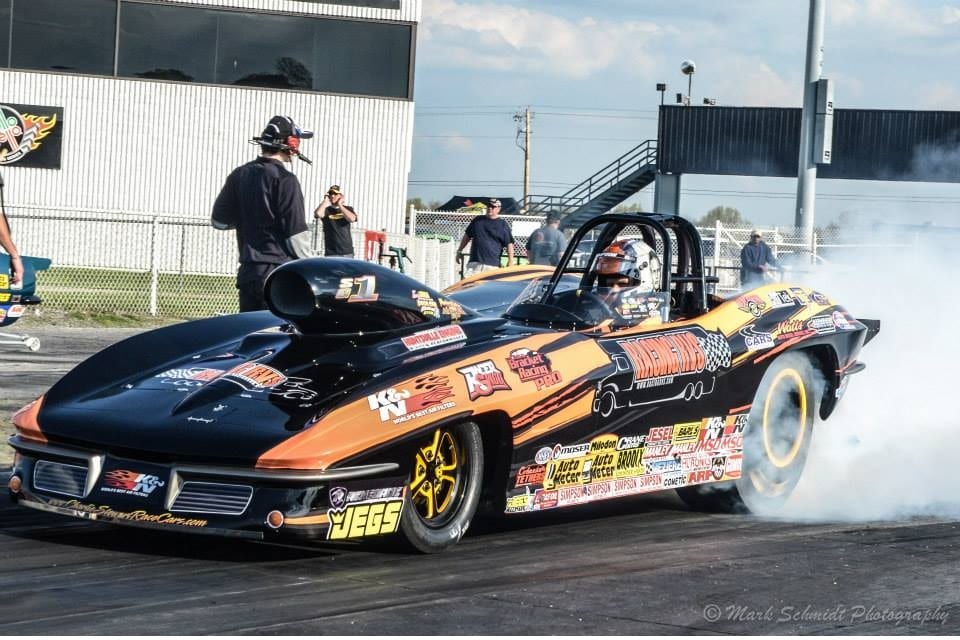 The inaugural Racing RV’s Exclusive 150, scheduled for May 13-15 at I-57 Hollywood Dragstrip (Benton, IL) is creating a lot of buzz. Not only does the unique event feature the largest purse in I-57 Hollywood Dragstrip history, but it will also host an exclusive field limited to no more than 150 entrants. As of this writing, the Racing RV’s Exclusive 150 entry list has dwindled to 144 entrants, leaving 6 spots open for last second entries.

“The race is on,” said co-promoter and two-time NHRA World Champion Luke Bogacki. “We’ll host this event with 144, 145, or however many racers can take advantage of it. The event was full for quite a while, but we had a handful of racers drop out last week as it marked the deadline for refunds. We just want to let interested racers who weren’t sure that they would have their cars together or maybe didn’t think the race would fill up that A.) It is going to happen. And B.) That there is still an opportunity to enter.”

To enter the Racing RV’s Exclusive 150, sign up online at www.I57Dragstrip.com. The $650 weekend entry is due immediately upon registration and is not refundable (although the entry is fully transferable if a racer is unable to attend).

Why is the Racing RV’s Exclusive 150 an event that you won’t want to miss? As stated above, the race features an enormous purse that is 100% guaranteed. Winners in Friday’s Flo-Fast/AirTek shootout and Sunday’s Renegade Racing Fuels event will take home $10,000 while the Saturday APD Main Event winner will earn $20,000! But it’s not just the winners who will cash huge checks: the Exclusive 150 features huge and deep payback for all late round finishers. Runner-up checks in the $10,000 races are $3,000 each (with $5,000 going to the runner-up in Saturday’s APD Main Event), and payback starts with third round winners. Better yet, the Racing RV’s Exclusive 150 features unprecedented cash contingency prizes for racers who are defeated in round 3 of competition! Friday’s round 3 losers will earn $100 each if they have purchased a Flo-Fast pump or AirTek tire gauge from Luke Bogacki Motorsports. APD customers (who are running either an APD carb and/or APD fuel pump) who are defeated in round 3 of Saturday’s main event will earn $100 each. Sunday, round 3 losers who have purchased fuel from the Renegade Race Fuels trailer (on site at the event) will take home $100 of the fuel of their choice!

As if that weren’t enough, racers who are unfortunate enough to fall in round 2 of Saturday’s APD $20,000 main event will have a second chance, courtesy of Auto Meter. The Auto Meter Second Chance race is FREE to all second round losers. Those competitors will then run off for a $5,000 total purse, featuring $2,500 to the winner!

The Racing RV’s Exclusive 150 is unique in that not only is entry limited to just 150 racers, but also that the event structure guarantees 150 unique, individual cars and drivers. No driver may enter two vehicles, and no race car may be driven by two drivers!

The event also features great prizes for the most rounds won by a door car, dragster, and overall. Plus, event promoters Bogacki, Bailey, and Newman will provide competitors with the hospitality they’ve become known for. Saturday night, all weekend entrants and spectators will be treated to a free fish fry dinner, compliments of ThisIsBracketRacing.com. In addition, the I-57 Dragstrip breakfast cart will make the rounds each morning, serving complimentary donuts, coffee, and assorted breakfast items.

If you’re already entered in the Racing RV’s Exclusive 150, the I-57 Hollywood Dragstrip looks forward to welcoming you May 13-15. If you’re not, time is running out! Enter now at www.I57Dragstrip.com. 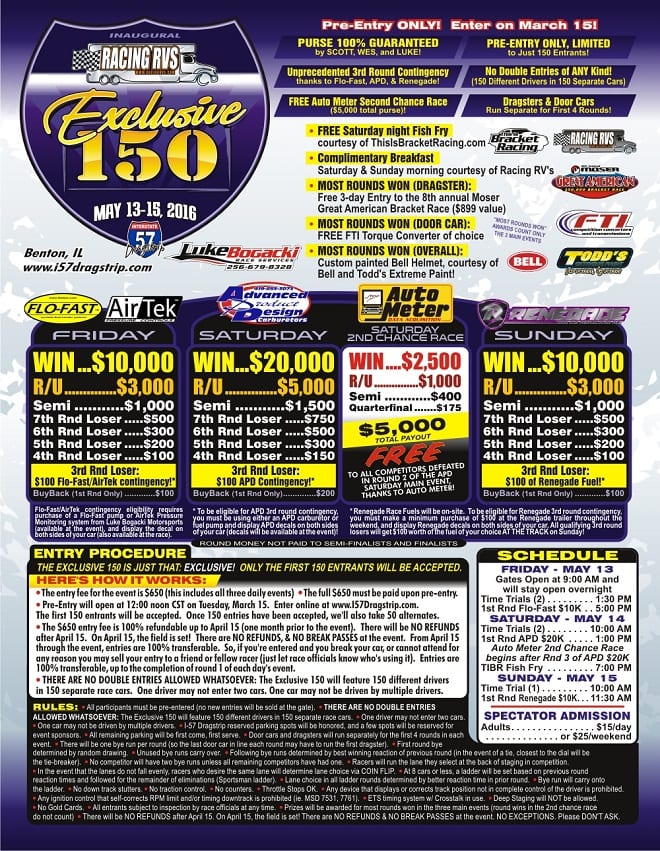