After a memorable season of racing within the six divisions of the Summit Racing Equipment Pro-Am Tour, several big-name drivers and a few new faces have emerged as division champions completing the field for this year’s Tournament of Champions.

The Summit Racing Equipment Tournament of Champions presented by AMSOIL, which determines the world championships in each of IHRA’s seven touring classes, is made up of the top three drivers in each class within each division on the Summit Pro-Am Tour. All of the qualified drivers will travel to Memphis International Raceway in October to compete in the preeminent sportsman event to determine the world champion in each class.

Headlining the 2014 Summit Pro-Am Tour divisional champions is Donaldsonville, Louisiana’s Jimmy Hidalgo Jr., the only driver to claim multiple divisional titles in 2014. Hidalgo, the defending IHRA World Champion in Super Stock, won the Super Stock and Stock divisional titles racing out of Division 4 en route to racking up the most points in the division. 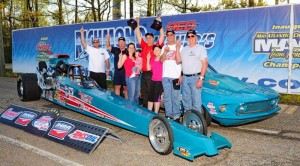 John Dustin, from Rockville, Maryland, was the other big winner this season in Summit Pro-Am Tour action, racking up five wins and a divisional championship in Hot Rod. Racing out of Division 1, Dustin had the most points of any driver on the entire Pro-Am Tour this season with 538 points accumulated en route to winning the Hot Rod championship. Four of Dustin’s five wins came in the Hot Rod class, with his other win coming in Quick Rod. 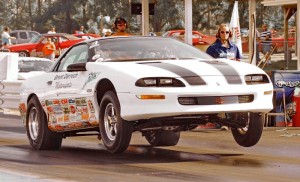 Seven drivers repeated as division champions in 2014 led by Brent Darroch, from Hookstown, Pennsylvania, who won the Division 3 Stock championship for the third consecutive season. Other drivers producing back-to-back divisional titles were Gerald Pierce, Mark Miles, Katherine Craft, Chris Cadle, Michael White and Hidalgo. All divisional champions, plus drivers finishing second and third in their division, will travel to Memphis to compete in the Summit Tournament of Champions October 10-11 at Memphis International Raceway.

In all, the 2014 Summit Tournament of Champions will feature 117 different drivers from 22 states and four Canadian provinces. The field also includes 12 former IHRA World Champions and features seven drivers that will go for gold in more than one class. Those drivers are Brett Nesbitt, Aaron Allison, Gil Carty, Darcy Clarke, Jimmy Hidalgo Jr., John Dustin and Chris Dean.

For more information on the Summit World Finals weekend and a complete breakdown of this year’s Summit Tournament of Champions field, visit www.ihra.com.