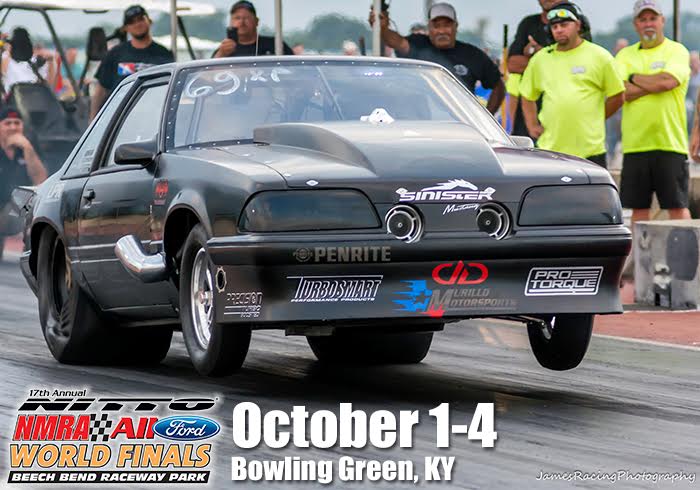 Nothing says “monster Ford event” more than celebrity appearances, and the Nitto Tire NMRA All-Ford World Finals at Beech Bend Raceway in Bowling Green, KY, October 1-4, will be bursting at the seams with awesome heads-up racing and TV star participation. MAVTV’s House of Grudge host, Mike Murillo, will be signing autographs all day Saturday beside his championship-winning Ford Mustang in the SCT display on the manufacturers midway. The action continues into Saturday evening for the first ever NMRA Grudge Night, where Murillo plans to take on other Mustangs from around the U.S. under the lights. Who knows… maybe Murillo will take on Street Outlaws’ Chris “BoostedGT” Hamilton, #5 on the 405 list, who will also be participating at the NMRA World Finals.

When asked about his plans to attend the NMRA All-Ford World Finals, Murillo jokingly replied, “I cleared my busy, exhaustive schedule to make this once-a-year event that we’ve missed the last two years. We always look forward to and enjoy the World Finals. We have so many fond memories from Bowling Green and can’t wait to catch up with our Mustang family and friends. See you there!”

Texan Mike Murillo is one of the most recognized, respected and active sportsman and professional drag racers of past and present. Mike holds 14 world championships and countless national event wins in the grassroots, highly competitive field of heads-up street/strip style drag racing. Mikes most recent titles are 2 years of doubling up on titles in 2 different classes in 2011 and 2012 as well as several wins in 2013.

The NMRA All-Ford World Finals also features heads-up, True Street, and bracket racing, the huge UPR Products Car Show, 300+ MPH jet cars, acres of used parts in the swap meet, and the largest manufacturers midway of the year. For more information on the event including schedule, pricing, directions, and event specifics, log on to www.NMRAdigital.com/KY or call 714-444-2426.