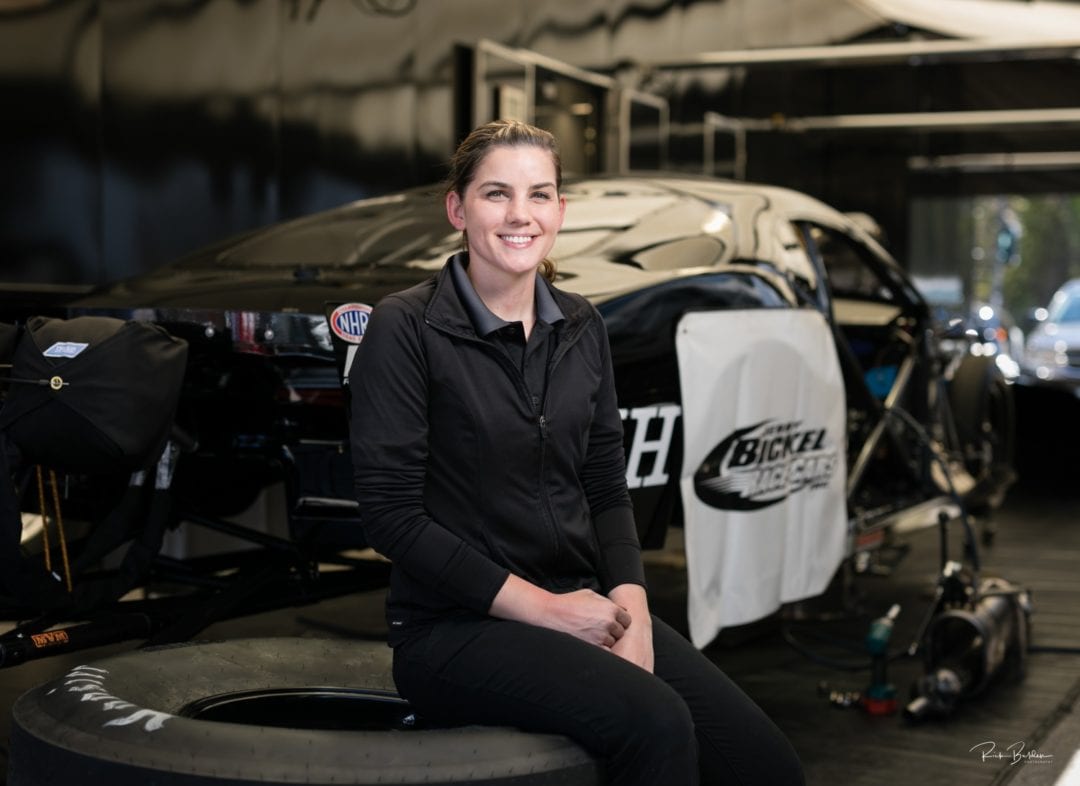 Through the ups and downs of a drag racing career that started in the Junior Dragster ranks, Cassie Simonton has become a most versatile driver and crew member. She’s driven and worked on some of the most powerful, ill-handling race cars in drag racing. Her winner’s circle experiences have taken place as close as five minutes from home in the cornfields of Brownsburg, Indiana, and as far away as the sandy megastrips of the Middle East.

The most recent chapters of Simonton’s eclectic career began in 2014 when her driving opportunity in the NHRA Top Alcohol Funny Car class dried up. She soon received a call from the Lagana brothers to join their Top Fuel team as a clutch assistant and tire specialist at a few races. She picked up the role quickly and was called up to handle the same duties on Bob Vandergriff’s Top Fuel dragster. The position on the full-time operation kept Simonton on the scene for a year and a half before the passing of Vandergriff’s sponsor, Josh Comstock, forced the longtime team owner to cease operations.

“It was unfortunate that things had to end the way they did, but I totally understand where Bob was coming from,” Simonton sympathized. “Stuff like that happens in racing. There were no hard feelings there. I was able to meet a lot of really cool people, and by the end I was working with Jason McCulloch and Ron Douglas. The hard work has paid off in that I have my name out there now. If something changes, I have opportunities to move around.”

“When [BVR] shut down, Frank was the first person to call. It wasn’t at first supposed to be like a full-time job – I was just going to a few races with them on the East Coast and move on. Thankfully, Michelle [Manzo, Frank’s wife] worked hard to get me on full-time. It’s been a big honor to work with Frank. I’ve learned a lot.”

For Simonton, a Minnesota native, another unique aspect of working on the Manzo-led AAP team is the ability to work side-by-side with her fiancé, Mikey Giaffino, who she met in 2012 when he was a primary crew member on Manzo’s Al-Anabi alcohol Funny Car. In addition to team mates and engaged couple, the duo can also be described as driver and car owner, as Simonton has been known to get behind the wheel of Giaffino’s supercharged Pro Modified Maverick typically driven by Top Fuel pilot Scott Palmer. 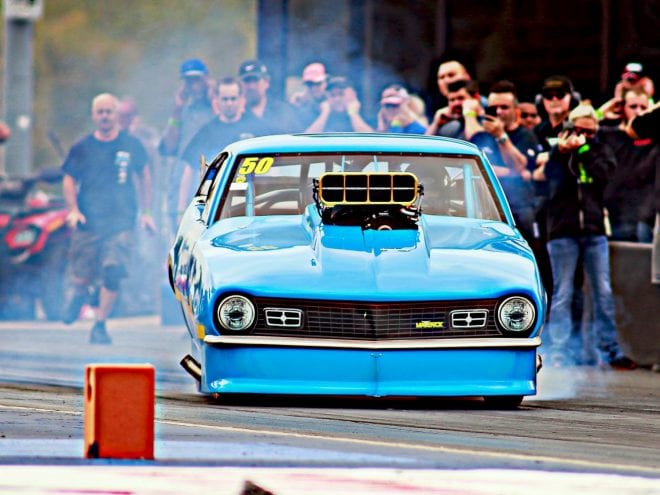 “A lot of people think we’re crazy because we live together and work together, but we both have the same passion for the sport,” Simonton pointed out. “We both love working on the cars. It’s just our life; this is what we do. It’s cool to be able to experience it all together. This is something we can talk about down the road after we get married, that we were able to work together, work for Frank Manzo and win races. It’s been a cool experience.”

One of the cooler experiences for Simonton came over the 2016-2017 offseason. The AAP team was flown over to Qatar to compete in the Arabian Pro Series to contend for a title with teams from several other countries.

“I never thought I’d get to experience racing in the Middle East,” Simonton admitted. “Big thanks to KH for bringing me over there. Being able to work with Frank and Michelle and the team, and Moe [Atat], who was an excellent driver, was a great experience. We won two races and went to four finals and ended up winning the Arabian Pro Series championship. It came down to the final round at the last race. It was very exciting.”

The 2017 season looks just as promising for Simonton, who clarified she hasn’t given up on the driving side of her career, but is focused on her work as a crew member. She’ll continue to work alongside Manzo and Giaffino on the AAP 1969 Camaro, this year driven by Mike Castellana.

“I’m still going to be working for KH on the Pro Mod car. Hopefully we’ll have a few weekends off so we can take Mikey’s car out again and get more experience driving that Pro Mod. Maybe I’ll have some other opportunities to drive another car at a couple races if everything works out. Right now I’m just going to concentrate on working on this car and doing well.”