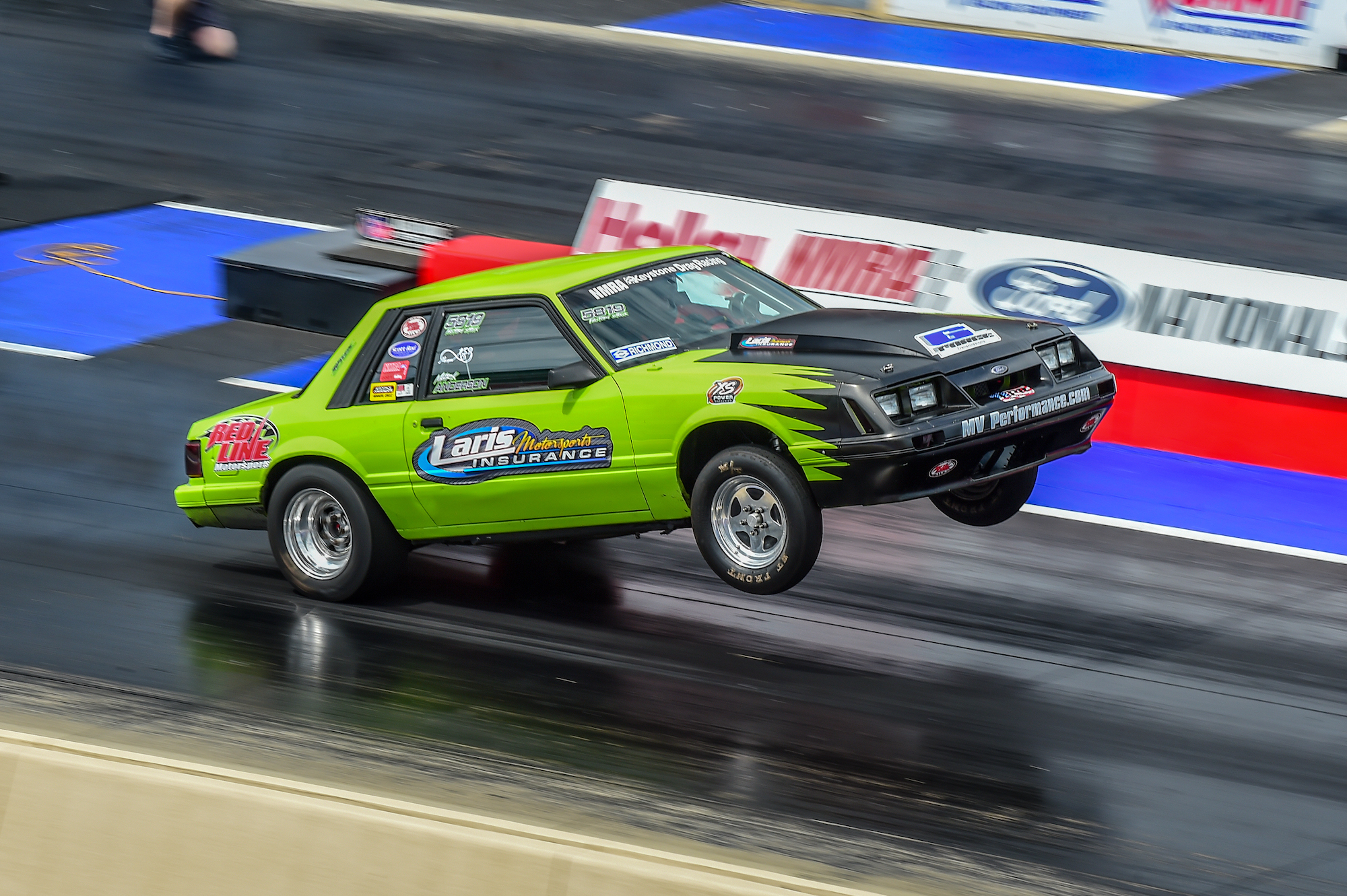 Hosted at the iconic Summit Motorsports Park, the fourth stop on the 2021 Holley NMRA Ford Nationals drag racing tour was the Inaugural NMRA Ford Performance Nationals on June 11-13 in Norwalk, Ohio, and the weekend wound down the fields in over a dozen classes to finish out strong with memorable winner’s circle celebrations.

Continuing his number one qualifying streak from St. Louis in Norwalk as well, Tony Hobson’s name topped the order for NMRA VP Racing Madditives Street Outlaw as his ProCharged 1990 Ford Mustang ran out the back door to go 4.353 at 165.01 mph. The Lake St. Louis, Missouri, resident took on John Urist in his Hellion Turbo 2015 Mustang, and although Urist had the hole shot advantage, he spun not long into the run and Hobson powered past to conclude another event with a win as his 4.422 at 164.81 mph time slip made things official. 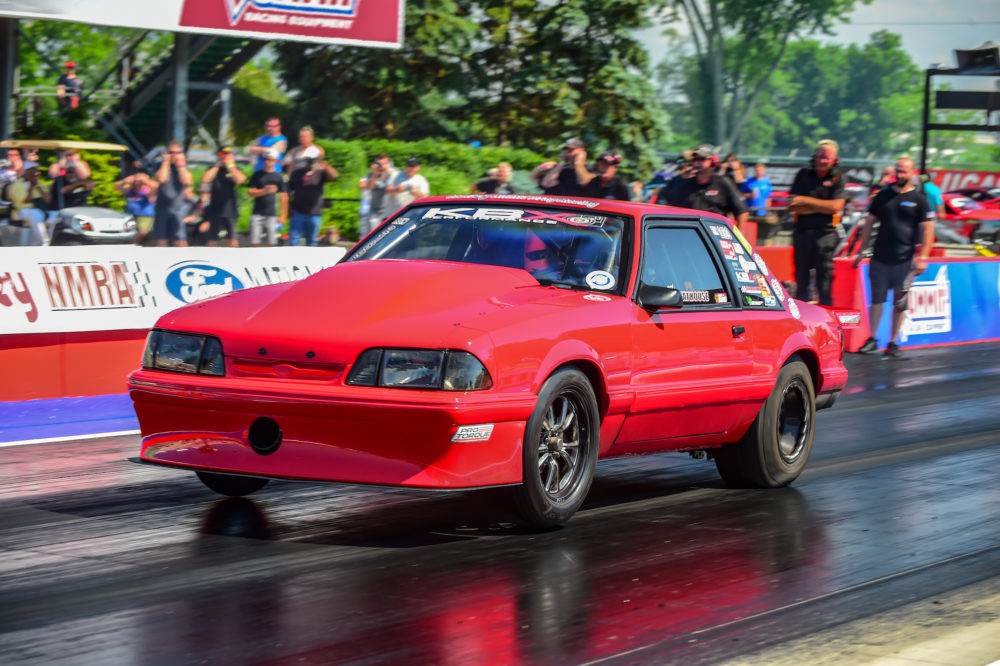 Once again, the NMRA Edelbrock Renegade qualifying sheet hosted KBX Performance power in the top spot as Joel Greathouse, the 2020 season champion, piloted Jeremy Wolf’s turbocharged 1993 Mustang to a quick 4.612 at 154.00 mph timeslip. New Yorker Eric Bardekoff was close behind in second with his supercharged 2016 Mustang and a 4.640 at 154.58 mph trip. The two took out the rest of the field on their way to the finals where it was a wild fight for glory, but Greathouse refused to relinquish his advantage and got the job done with a 4.633 at 153.33 mph blast to cap off his second win of the weekend.

Reigning JDM Engineering Limited Street champion Bill Putnam of Loxahatchee, Florida, put his UPR Products-backed 1994 Mustang into the lead during qualifying when he ran it out the back door to go 8.525 at 160.48 mph. Putnam continued to dominate the field in eliminations and met with Kevin McCotter who had qualified seventh in the finals. When the green light signaled the start, Putnam let loose with a monster rip and widened the gap all the way to the finish. He lit the scoreboards with an 8.538 at 161.04 mph run to add yet another win to his incredible streak as McCotter slowed to cruise home as the runner up.

Nathan Stymiest was the number one qualified driver in G-Force Racing Transmissions Coyote Stock for the second event in a row, as the Pennsylvania-based driver ran 9.905 at 134.91 mph this time out in his 1992 Mustang. Stymiest exited during eliminations, although Randy Soper and Chad Stephens both continued on. In the finals, Soper had the advantage on paper having qualified fourth to Stephens’s twelfth, but a red light ended the weekend for Soper and allowed Stephens, who had overcome ongoing mechanical trouble with his ’87 “Dirty Bird” Thunderbird all weekend long, to take his much-deserved first ever trip to the winner’s circle for the class before he headed back to his home in Canada.

With both the quickest elapsed time and the fastest trap speed, Mike Bowen of Girard, Pennsylvania, topped the qualifying list in Richmond Gear Factory Stock with a 10.362 at 129.83 mph trip in his 1971 Ford. However, the final round was occupied by the number two qualifier, Mark Anderson (feature image) of Illinois, and Justn Fogelsonger of Pennsylvania, for a rematch of the St. Louis race they had run less than 48-hours prior. With a reversal of the results from the last showdown, Anderson and his Laris Motorsports Insurance-backed Mustang wrapped up the win with a 10.363 at 127.04 mph blast.

A perfect 0.000-second reaction time for ARP Open Comp driver Ray Williams Sr. of Thomasville, Georgia, put him and his 1979 Ford ahead of the rest of the 37-car class for qualifying. In eliminations, though, Dennis Corn and Ashley Conway-Lang lined their cars up against one another for all the marbles in the finals. Lang was a touch late on the tree and opened the door for Corn to steal the show, which he did when he ran 9.418 at 124.46 mph on his 9.32 dial in.

The competition was tight in Exedy Racing Clutch Modular Muscle, but Floridian Jason Henson’s dead-on 0.000-second light with his 2002 Mustang in qualifying entitled him to have his name put into the lead. Andy Russell also had a perfect reaction time and wound up third as a result, and Fallon Walker wasn’t far behind in sixth with a 0.005-second light. They both drove expertly through eliminations and were aiming for 10.12-second and 11.25-second runs in the finals, but Walker slowed a touch and Russell illuminated the win light with a 10.211 at 125.83 mph run to make Walker the runner up.

Running in two categories this weekend, Texas’s own Llyod Mikeska qualified number one in HP Tuners Super Stang with a 0.004-second reaction time behind the wheel of his 2016 Mustang. Mikeska made his mark on eliminations and stayed in the game through to the finals, but Chris Parisi of Jacksonville, Florida, who had qualified on Mikeska’s heels in second outran the man where it mattered most. Taking the win with a 120.94 at 104.80 mph pass, Parisi added an Edelbrock Victor to his collection.

Mike Roup’s 1970 Ford pickup left the startling line just 0.001-seconds after the green light lit during Detroit Locker Truck & Lightning qualifying to earn the top spot. Based out of Texas, Roup held strong until the semi-finals, but multi-time champion Randy Conway of Michigan and defending champion Bob Dill of Pennsylvania worked their way to the finals. As the lights came down, both men wanted to get going, but Dill was too quick on the tree with his 2001 truck and Conway scored the win as a result of a red light in the opposing lane with a 10.319 at 126.16 mph trip from his 1984 model as the icing on the cake. 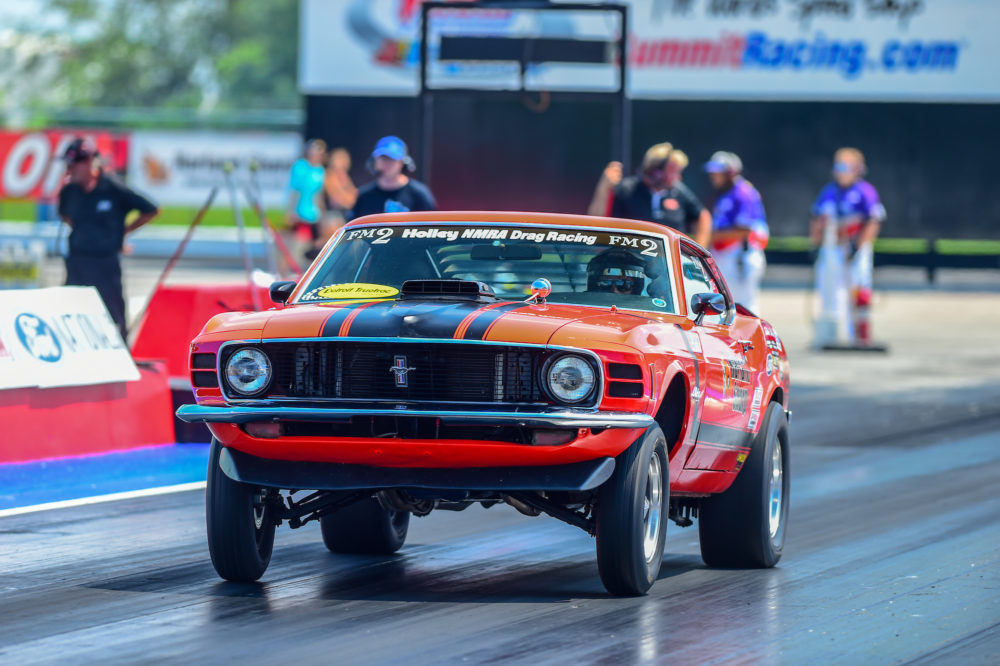 Running just 0.003-seconds over his 10.503 index with his 1972 Ford, Clyde Dunphy was the number one qualifier in RacePagesDigital.com Ford Muscle. When eliminations began, the Illinois-based racer went out in the semi-finals while the number five and six qualified drivers, Danny Towe and Matthew Keiser, respectively, took up the two spots in the finals. Although both men were just 0.01-seconds off their dial ins, with Georgia resident Towe going 12.01 and the Indiana-based Keiser going 10.26, the victory went to Towe by default as Keiser turned on the red light at the start instead of the win light at the finish.

Mickey Thompson Street Car Challenge competitors put their street legal machines to work on the 1,320 and Randy Thomas had the quickest car of them all in qualifying as his 2010 Ford Mustang recorded an 8.393 at 164.49 mph run. Thomas took his place in the finals with Shane Isaacs and his 1993 Mustang in the other lane. Both men had run quicker than 8.50 earlier in the race and, as neither car held a chassis certification to go below the number, were given warnings as per the rulebook. When it came time to do business, they both went all out and ran quicker than 8.50 yet again. As a result, both were simultaneously disqualified and with no winner of the race, they were designated as co-runners up. It was a truly unique situation, but Thomas and Isaacs had fun with the turn of events as they shared the winner’s circle photos and even cut the trophy in half so they could each keep a piece.

Drivers in QA1 True Street got to enjoy a scenic 30-mile cruise around Ohio farm country before blasting down the drag strip three times in a row. The quickest average of the group, 8.691-seconds, belonged to Randy Thomas of Paducah, Kentucky, and his 2010 Ford Mustang, which made Thomas the overall winner. Neal Adler was named the runner up thanks to his 9.471-second average with his 1988 Mustang, while individual class wins went to Rick Baum (9-second), Bo Webb (10-second), Dominic Post (11-second), Thomas Van Tassel (12-second), Timothy Miller (13-second), Chris Lee (14-second), and Chris Graff (15-second).

The ladies got to compete in a separate QA1 All Female True Street Presented by Baer Brakes, with top honors going to Leticia Hughes who averaged 11.095-seconds in her 2018 Mustang and the runner-up spot was taken by Leigh Ann Wagoner with an 11.982-second average in her 2019 model. Maci Belcher won the 12-second group, Sabrina Wright won the 13-second section, Amanda Jordan was the quickest of the 14-second racers, and Heather Flanagan took the title for the 15-second bunch.

The special TREMEC Stick Shift Shootout hosted the quickest eight manually-shifted cars of the QA1 True Street for a random-pairing of eliminations. Each contestant received a custom acrylic award, but Jeff McCool earned the big win in the battle of the Fox body final round and got to take home a McLeod Racing RXT win disc clutch and flywheel valued at $1,300 thanks to his 10.202 at 136.91 mph blast while runner up Tim Lasto scored a $500 McLeod Racing product certificate.

On Friday evening, four of the rain-delayed final rounds from the 16th Annual NMRA/NMCA Super Bowl of Street-Legal Drag Racing Presented by HPJ Performance at World Wide Technology Raceway outside of St. Louis, Missouri, were run to completion. Taking the win in Edelbrock Renegade was Joel Greathouse over Martin Connelley, while in JDM Engineering Limited Street the victory went to Bill Putnam who ran against Chad Wendel. In G-Force Racing Transmissions Coyote Stock, Kevin McMullin lit the win light in his lane and put Randy Soper on the trailer, and Justin Fogelsonger did the same to Mark Anderson in Richmond Gear Factory Stock.

The UPR Products Car Show and special Ring of Fire competition were in full swing on Saturday as well, and the Model T Ford Club International brought out their absolutely beautiful antique Fords to display during the festivities.

The 2021 Holley NMRA Ford Nationals drag racing series continues with the Inaugural Arrington Performance NMRA/NMCA Power Festival presented by Force Engineering at “The Fastest Track in Michigan,” US 131 Motorsports Park in Martin, Michigan, on July 22-25 and the NMRA will return to Summit Motorsports Park in 2022 on June 10-12. For more information and advance tickets, visit NMRAdigital.com.