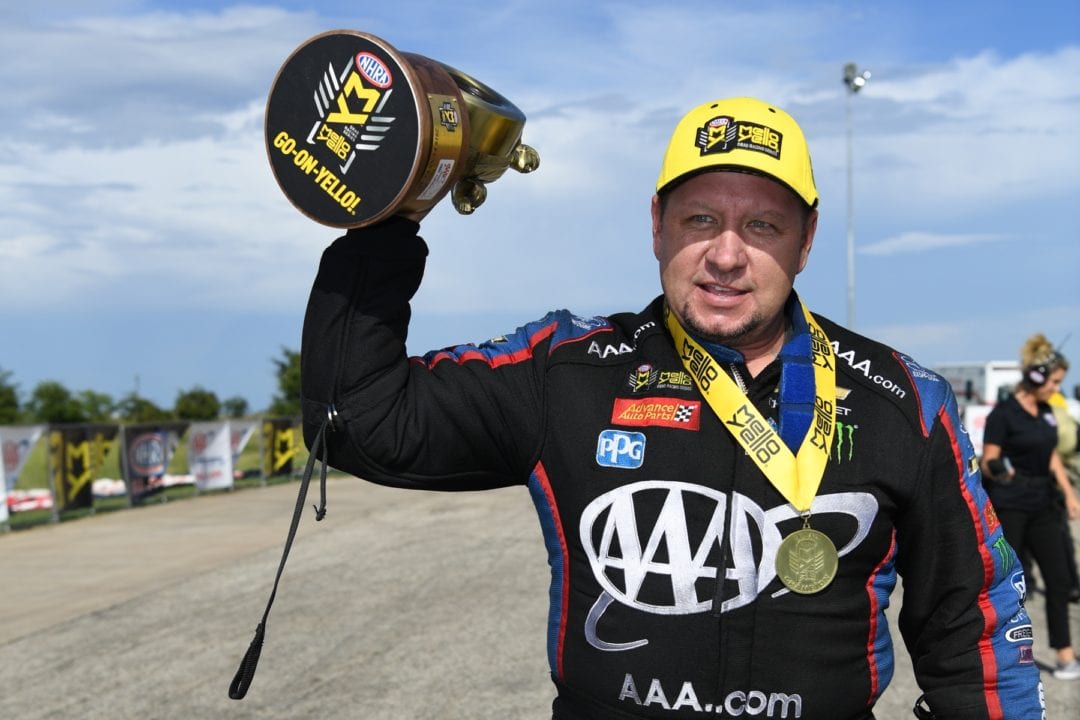 Heading into the season finale at Auto Club Raceway at Pomona history will be made in the Funny Car category. Reigning Funny Car champion Robert Hight is focused on making sure it is his name that goes down in the record books. In a tough Funny Car battle that has seen two of the top teams slug it out like heavyweights, Robert Hight will need to land a knockout blow during final eliminations but he could do some damage during qualifying if his Auto Club of Southern California Chevrolet Camaro continues to stack up qualifying bonus points.

The 45-time Funny Car event winner needs to cut into a 74-point lead during the two days of qualifying at the historic Auto Club Finals and the NHRA’s points and half program will give the crewman turned world champion a definite assist. The chance to make history is not lost on Hight.

“No one has won back-to-back championships since John Force back in the 2000s,” said Hight. “This would be big. It really shows how competitive this Funny Car class is. We are behind but we are going to go in there very aggressive and try to gobble up every point we can get. All we can do is what we can do. We can’t control what J.R. Todd does unless we race him. We’ve already won both AAA races this year and we need to win the third. That’s going to give us the best possible chance to win two championships in a row.” 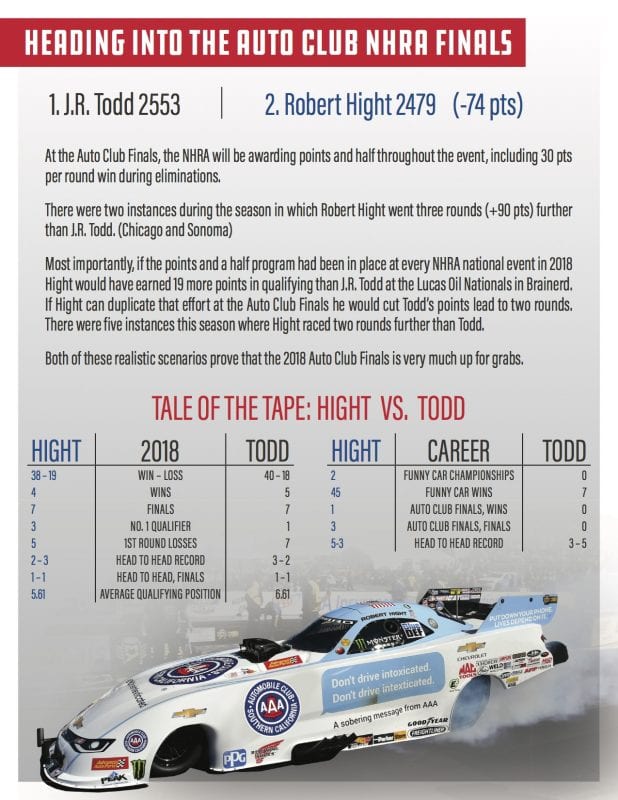 To say the battle for the Funny Car world championship has been a wild ride for reigning Funny Car champion Robert Hight is an understatement of epic proportions. After the second race of the NHRA Countdown to the Championship Hight took over the Funny Car points in spectacular fashion, endured a broken collarbone and the ensuing surgery to repair his shoulder, picked up another win and until Las Vegas was holding off a tough charge from the rest of the Funny Car class.

Fate took a tough turn for Hight when a dropped cylinder in the first round deprived his Funny Car of much needed power in a surprising early loss two weeks ago. Hight was forced to sit on the sidelines and watch his points lead disappear and an almost insurmountable lead extend.

“With points and a half it is a whole new ballgame,” said Hight. “We can cut into the lead in qualifying and hopefully get within two rounds going into race day. It won’t be easy but it is doable. On race day we just need to do our job. That is what we have done all season. This Auto Club team has won championships before and we would love to win again in front of all our Auto Club supporters.”

So far in the Countdown Hight has collected two wins and a semifinal finish. That is right on track with where the 45-time Funny Car winner wants to be to put himself in championship contention.

“At the beginning of the Countdown I felt like you would need to win three races and not have any first round losses if you wanted to win the championship. We stumbled in Las Vegas but we are still in it,” said Hight. “I love how (crew chiefs) Jimmy (Prock) and Chris (Cunningham) have this Auto Club Chevrolet Camaro running after some testing in Las Vegas. I need to be at the top of my game, too. This is going to be an exciting weekend.”

Hight has raced to three final rounds at the Auto Club Finals with a runner-up finish to his credit last year. At that event Hight narrowly made the field qualifying No. 15 and then racing past Tim Wilkerson, Matt Hagan, and Courtney Force before losing a close final to Tommy Johnson Jr. In his other two final round appearances Hight started from the No.2 and No. 14 positions. In 2007 he picked up his lone win over Phil Burkart after dispatching Gary Scelzi, Jerry Toliver, and Mike Ashley.

Throughout the 2018 Countdown Hight has been racing a Distracted Driving themed Auto Club of Southern California Chevrolet Camaro. On a number of occasions Hight has talked about the dangers of texting and driving as well as staying focused behind the wheel. As the season winds to a finish and a third champion looms on the horizon Hight has taken the distracted driving theme even more to heart when he straps into his 10,000 horsepower Funny Car.

“This is a great initiative that Auto Club has, ‘Don’t drive intoxicated. Don’t drive intexticated.’ They are all about making our roads and highways safer,” explained Hight. “There’s going to be a family out at the Auto Club Finals on Sunday for the track walk and pre-race ceremonies that lost their daughter to somebody texting and driving. This is an important initiative that I’m glad to be a part of. Since its launch with our new paint scheme at the beginning of the Countdown, we’ve had a lot of fans come up to us and tell us that they want to be better drivers. I really hope this program works and makes people aware of bad habits while driving.”