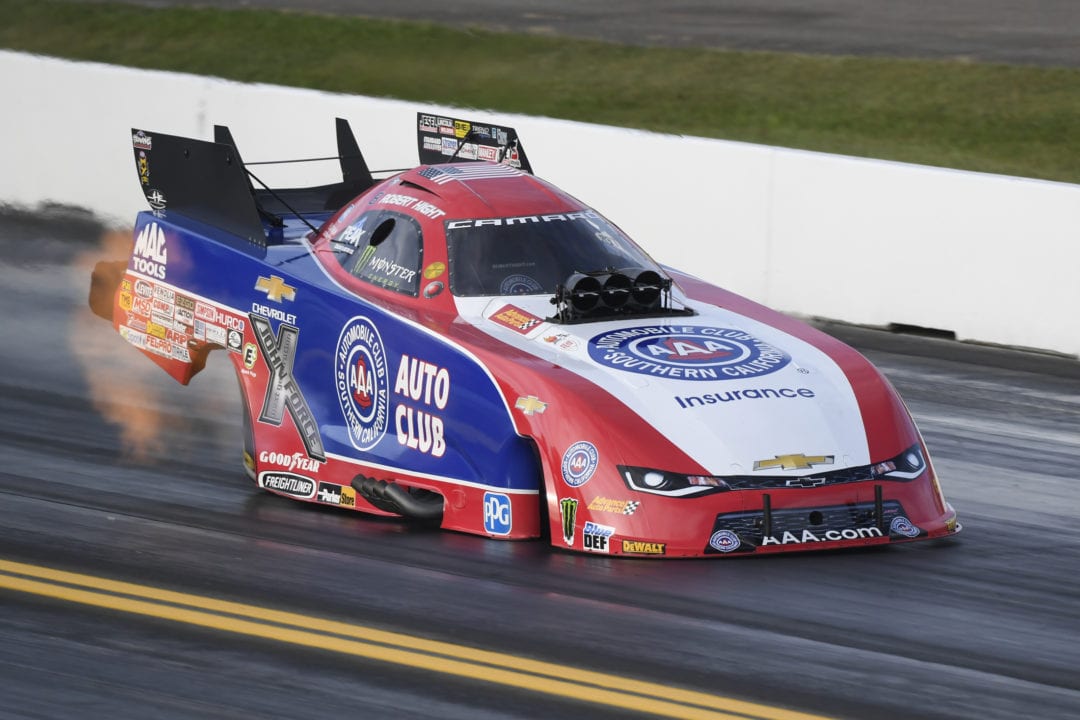 Robert Hight powered to the provisional qualifying lead Friday evening at the 33rd annual Dodge NHRA Nationals at Maple Grove Raceway in Reading, Pa. behind a record-breaking run.
Clay Millican (Top Fuel), Bo Butner (Pro Stock) and Hector Arana Jr. (Pro Stock Motorcycle) are also top qualifiers in their respective categories at the second of six playoff events during the NHRA Mello Yello Drag Racing Series Countdown to the Championship.
Hight broke both ends of the track record with a 3.844-second pass at 339.02 mph in his Auto Club of Southern California Chevrolet Camaro, the second-fastest speed in NHRA history. The previous Maple Grove Raceway elapsed time record was a 3.850-second pass, while the previous speed record was 333.99, both from last season.
“I’m pretty excited that we’re having these conditions in Reading, because it’s very similar to what we had last week in Charlotte where we got the win,” Hight said. “We picked up right where we left off and got five points today, which is really what we’re trying to do each time we hit the track for qualifying.”
Hight is aiming for his sixth No. 1 qualifier of the season en route to his second consecutive win in the Countdown to the Championship.
Matt Hagan currently sits at second in the preliminary Funny Car qualifying after a 3.874 pass at 335.82 in his Mopar Express Lane Dodge Charger R/T, while defending world champion Ron Capps is in the third slot after a 3.877 at 327.43 from his second pass of the day. 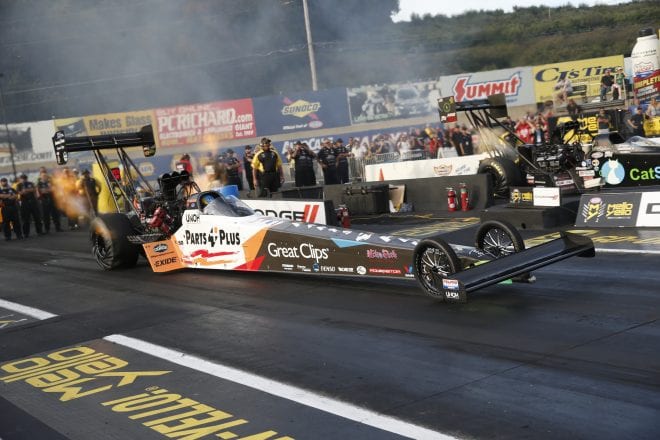 Millican, currently sixth in the Top Fuel points standings, raced to a 3.699 pass at 327.27 in his Parts Plus / Great Clips dragster. He is looking for his fourth No. 1 qualifier of the season.
“Our crew chief was actually disappointed with the run, because we thought we would run faster but it was still a good run and we’re aiming for every bonus point we can possibly get,” Millican said. “Every lap we’re going to push for those bonus points, so we know we will need those throughout the rest of the Countdown.”
Points leader Doug Kalitta wound up in the second slot after the first day of qualifying with a 3.704 at 333.66 in his Mac Tools dragster. Steve Torrence currently sits in third after a 3.720 at 327.66. 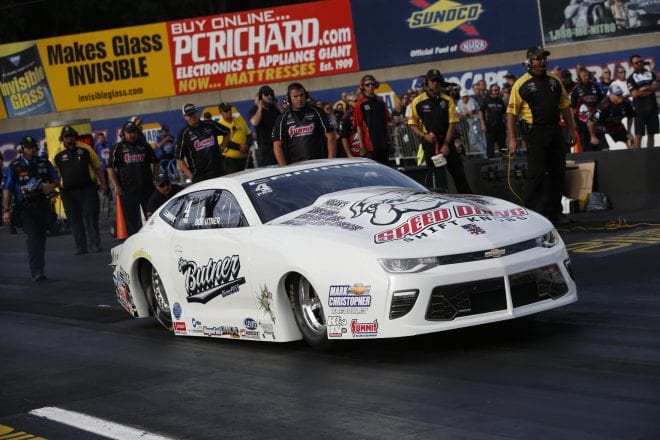 In Pro Stock, Butner currently holds the top spot after driving to a 6.554 at 210.18 in his Jim Butner’s Auto Chevrolet Camaro during his first pass of the day. He is seeking his fourth No. 1 qualifier of 2017.
“We feel great after today since our car ran so well, we have room for improvement but that’s what we’re looking for this weekend,” Butner said. “Our cars seem to like these hotter tracks, so we’re very excited to come back out tomorrow to try and make some improvements.”
Jason Line notched the second preliminary qualifying spot after a 6.563 at 210.54 in his Summit Racing Equipment Chevrolet Camaro. Points leader Tanner Gray ran a 6.565 at 210.44 to round out the top three on the day. 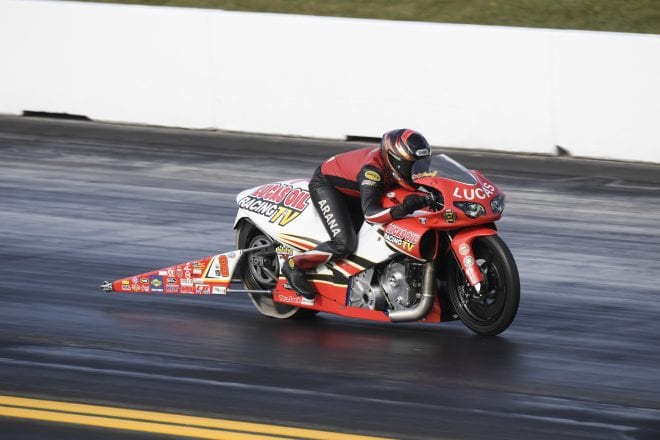 Arana Jr. finished atop the Pro Stock Motorcycle qualifying order with a 6.834 at 196.76 in his Lucas Oil Buell during his second pass on Friday after not making it down the track in the first session. He has one previous No. 1 this season.
“We had some data for the track despite a rough first run, and we trusted our combination to be fast and we ended up really well,” Arana Jr. said. “We know how important these qualifying points are, so we were pretty excited to see we held onto the top spot today.”
Points leader Eddie Krawiec earned the second position with a 6.841 at 195.45 on his Screamin’ Eagle / Vance & Hines Harley-Davidson. Scotty Pollacheck took the third spot after a 6.850 at 195.90.
Qualifying at the 33rd annual Dodge NHRA Nationals continues at 12:45 and 3:15 p.m. on Saturday.