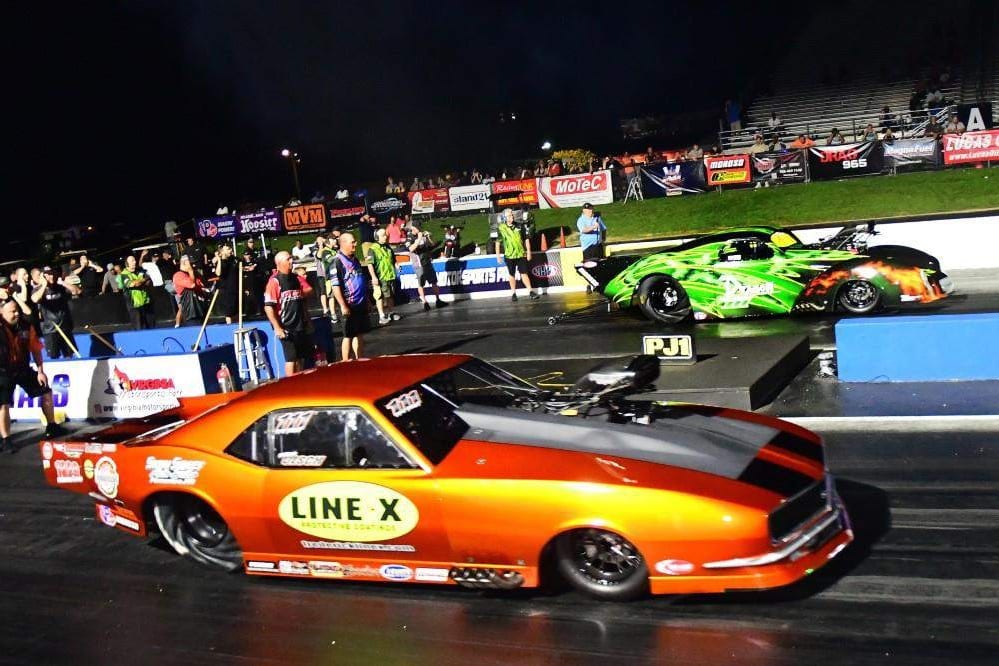 Ric Fleck has competed in Pro Boost since the PDRA’s debut season in 2014, posting Top 5 points finishes in 2015 and 2016, but he had yet to win a race or even reach a final round before the Firecracker Nationals. Fleck changed that when he took down points leader Chuck Ulsch in the final round, laying down a 3.769 at 196.76 in the Roots-blown “Dragon III” ’41 Willys to Ulsch’s 3.791 at 194.24. The two drivers last met in the Summer Drags semifinals in Michigan, a pairing Ulsch won en route to his first PDRA win.

“It feels good not only to win, but to go through the people we went through to get it,” Fleck said. “We went through some of the best – John Strickland, Tommy D’Aprile and Chuck Ulsch. That was a battle. The car was good. The car was really good in Michigan, but Chuck got us there. We got down here and didn’t change anything. We qualified No. 2 and (tuner) Devin Barrick kept after it all day.”

Fleck recorded an impressive 3.799 in the heat of the day to open eliminations against Anthony DiSomma, then ran a 3.83 over Strickland and a 3.773 over D’Aprile. Ulsch, who’s been to the final round at all four races this season, previously defeated alternate Dina Parise, Junior Ward and Larry Higginbotham. 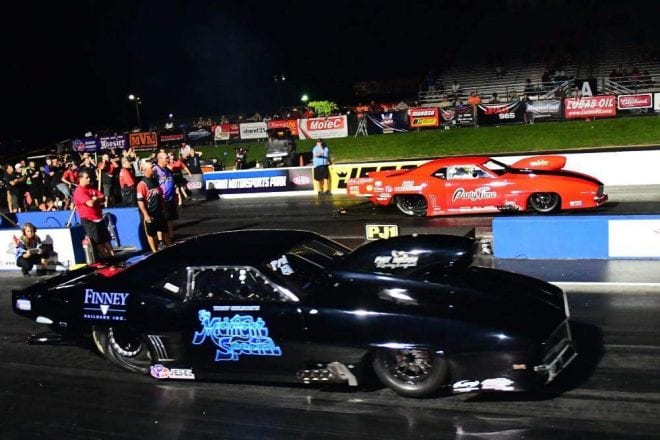 Coming off of a slump-breaking win at the Summer Drags in Martin, Mich., Jason Harris and the “Party Time” Boone-Harris Racing ’69 Camaro were riding a wave of momentum into the Firecracker Nationals. The same strategy that carried Harris to the win in Michigan was successful in Virginia, as Harris poured the coals to his Musi-powered entry and raced to a 3.716 at 203.28 to defeat first-time finalist Tony Wilson and his 4.475 at 130.29.

“Just like at Martin, we didn’t really have the fastest car every round, but we just raced the race track and raced the opponent and it worked out,” said Harris, the 2014 world champion. “I’ve been driving good again, and it was just time in the finals to turn it up and see what it had. It worked out great for us. I just have to thank the Boone family, Danny Perry and our crew for their hard work this weekend.”

Harris, the No. 3 qualifier, posted decisive round wins over Todd Fontana and Tommy Mauney before securing his second consecutive final-round appearance with a holeshot-win 3.754 over Jim Halsey’s 3.735 in the semifinals. Wilson started his day with a holeshot win over No. 1 qualifier Randy Weatherford, then knocked down Chris Rini and Jay Cox. 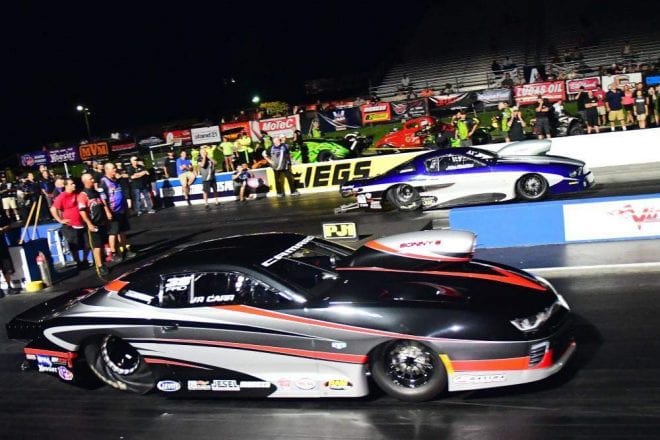 John Pluchino was on a mission to redeem himself after a red light in the final round dashed his chances of winning the Summer Drags in Martin, Mich., in early June. He was able to pull off the win Saturday night, though, as he left first in his Kaase-powered ’13 Mustang and ran 4.108 at 175.75 alongside J.R. Carr’s 5.209 at 98.48 in his Sonny’s-powered ’18 Camaro.

“That red light at Martin broke my heart,” said Pluchino, the 2016 world champion. “That was absolutely on my mind going into the final tonight. I was .022 the round before and .022 in the final. I was on my game this weekend. I can’t say enough about my guys. It’s been a long, hot weekend, but it’s all worth it now. I love doing this, I love doing it with my son, and there’s nothing else I’d rather do.”

Pluchino qualified No. 4 and picked up his pace each round, going 4.149 over a red-lighting Dave Hughes, 4.143 over Elijah Morton and a holeshot-win 4.131 over No. 1 qualifier John Montecalvo’s 4.081. Carr posted round wins over Lester Cooper, Steven Boone and Matt Giangrande. 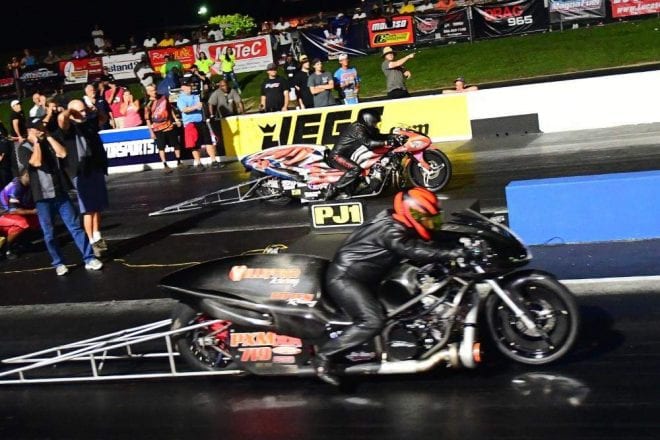 Ehren Litten (near) over Terry Schweigert

Despite entering the season as a true rookie in the world of slick-tired, wheelie bar-equipped motorcycle drag racing, Ehren Litten was performing like a veteran Pro Extreme Motorcycle rider as he charged to his first PDRA victory Saturday night. Litten went head-to-head with No. 1 qualifier Terry Schweigert in the final round, using a sizable holeshot and weekend-best 4.003 at 183.54 aboard his turbocharged Williford Racing ’18 Suzuki to defeat Schweigert’s 4.04 at 175.99.

“Four races in, we’ve won two of them – that ain’t bad,” said Litten, speaking of teammate Rodney Williford’s win at GALOT. “Rodney won the first race with the nitrous bike, then we got one with the turbo bike tonight. I don’t think you can ask for anything more. I’ve got a great team behind me. This weekend, we went through two motors on the nitrous bike and two motors in the turbo bike. It definitely wasn’t easy, but we made it happen.”

Racing out of the No. 2 spot, Litten rode to a 4.058 to beat defending world champion Travis Davis and a 4.037 to take down points leader Ronnie “Pro Mod” Smith before facing Schweigert in the final. Schweigert defeated Williford and Chris Garner-Jones on his way to the final. 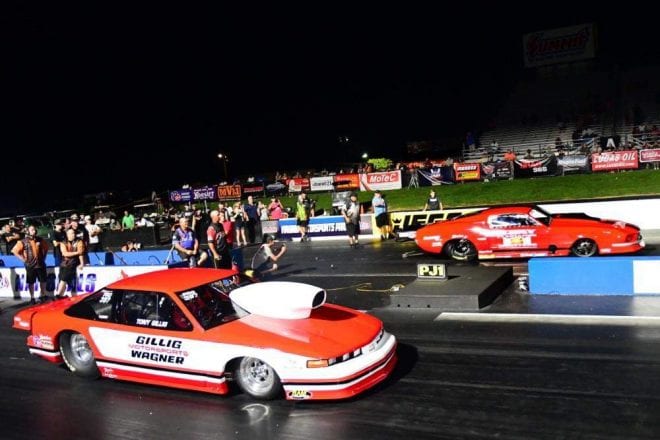 After escaping a bizarre first round in Pro Outlaw 632, which saw three drivers break before the starting line, Daryl Hameetman was the picture of consistency in his 5-Day Shutters & Blinds ’67 Mustang. He was ready for a race in the final round, posting a 4.314 at 166.31, but opponent Tony Gillig encountered trouble immediately after launching his new ’96 Oldsmobile Cutlass.

“We just kept picking away at it and trying to go quicker,” said Hameetman. “It feels pretty good to get this win. It’s really only our fourth race with the car and we’ve come a long way in a short time.”

Hameetman qualified No. 3 and dodged a bullet first round when he went 7.13 and opponent Chris Holdorf broke. A 4.327 was enough to beat Jeff Ensslin, then Hameetman improved to a 4.311 to defeat Walter Lannigan Jr. Gillig raced from the No. 7 spot and took out Jordan Ensslin and No. 1 qualifier Johnny Pluchino before running 4.316 on a single in the semifinals. 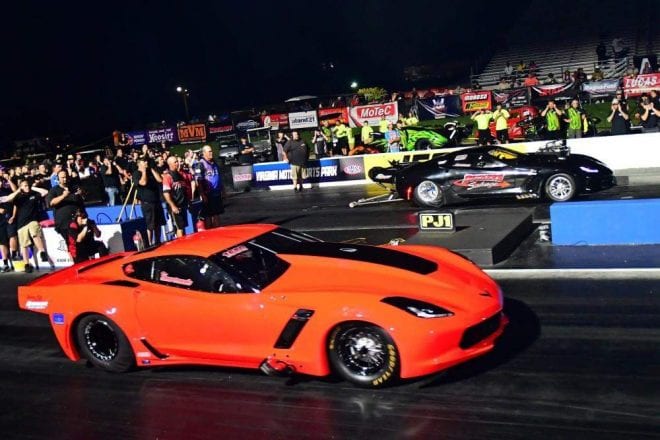 Pro Outlaw 632 star Ken Quartuccio had modest goals for the debut of his new Skinny Kid Race Cars-built ’17 Camaro in Outlaw 10.5. The Pro Line-powered, turbocharged entry went into eliminations as the No. 1 qualifier and ended the day as the event winner and quickest car of the weekend with a 3.978 at 197.83 to defeat No. 2 qualifier Mike Decker III’s 5.258 at 199.96

“Realistically, I knew we would struggle during the day but be in pretty good shape at night,” said Quartuccio, who earned the win on drag radial tires. “We put a lot of work into the car, so I was pretty confident we would be competitive. I would’ve been happy with a decent qualifying spot and to go a couple rounds today, so this is beyond expectations.”

Quartuccio’s No. 1 qualifying effort earned the East Side Auto Transport owner a first-round bye run. Tuned by Jamie Miller, he went on to run a 4.137 over Jesse Lambert’s 4.733, then a strong 4.016 over Blake Copson’s 4.111 in the semifinals. Decker in his supercharged Decker’s Salvage ’14 Corvette marched past Joseph Thomas and had a single before defeating his father, Mike Decker Jr, in the semifinals. 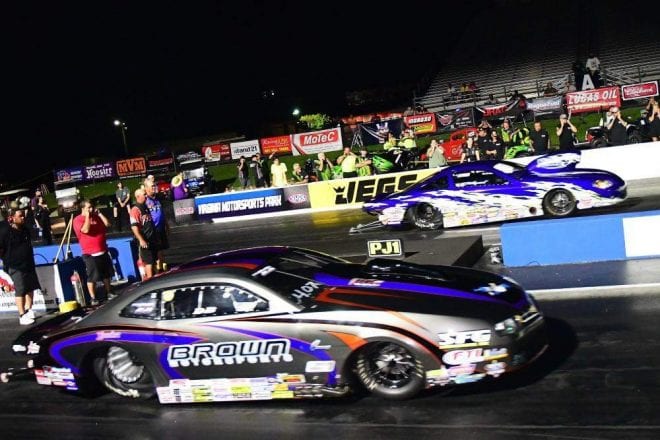 Derrick Brown (near) over Donny Urban

Derrick Brown and Donny Urban left the starting line separated by just three thousandths of a second, but Brown maintained his advantage in his ProCharger-boosted ’14 Camaro to run 4.086 on a 4.07 dial-in over Urban’s 4.136 on a 4.12 dial in his nitrous-assisted ’06 Chevy Cobalt.

In Top Sportsman 32, Bealeton, Virginia’s Wayne Rogers secured the win at the Christmas tree when Mike Butler red-lighted, allowing Rogers to take the win with a 4.341 on a 4.32 dial-in. 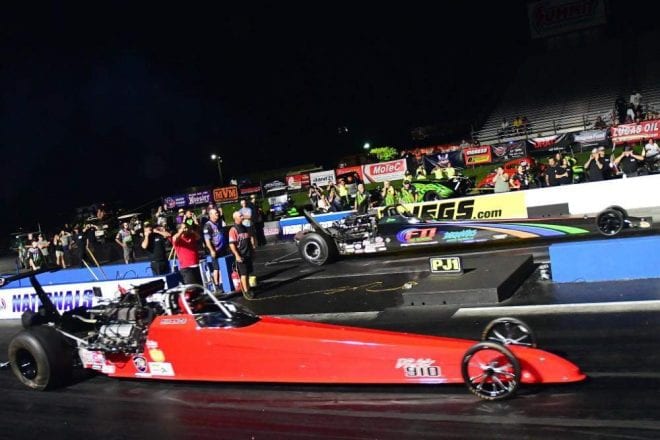 Chaz Silance (near) over Brian Bednar

A pair of supercharged dragsters, both dialed 3.85, squared off in the Top Dragster final round, with Chaz Silance running 3.855 to Brian Bednar’s 3.848. Bednar’s FTI Converters ’09 Spitzer left the starting line first, but his break-out run made way for Silance to take the win in his Buck-powered ’08 Worthy dragster.

The next race on the 2018 PDRA Tour is the inaugural PDRA Super Strip Nationals, July 19-21, at National Trail Raceway near Columbus, Ohio.