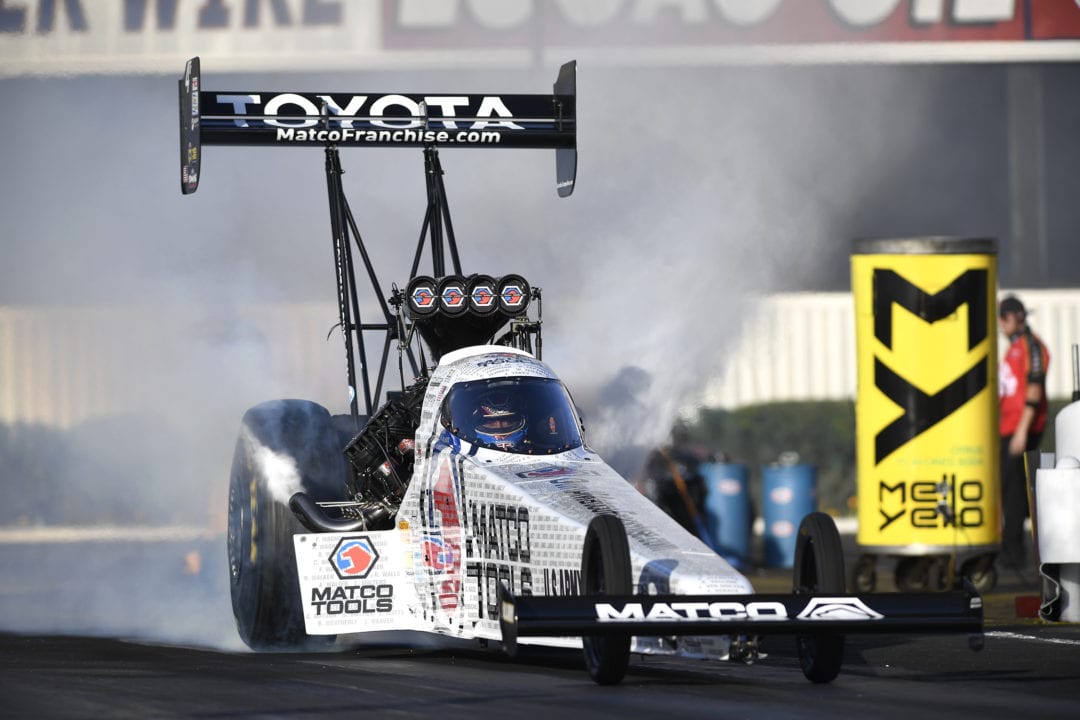 Don Schumacher Racing (DSR) is pleased to announce Hangsterfer’s Metalworking Lubricants has expanded their involvement with the 16-time world championship race team as they embark on their fifth year together.

The partnership, which began in 2014 when Top Fuel world champion Antron Brown was on the hunt for a Jr. Dragster for his son and was introduced to Hangsterfer’s Laboratories in the process, has grown tremendously since its first affiliations with Brown and DSR. What was once a marketing partnership built on in-kind product support, has developed into a major associate sponsorship role on Brown’s 11,000-horsepower Top Fuel dragster and has now grown to include a supporting role on the Make-A-Wish Foundation Funny Car, piloted by Tommy Johnson Jr.

“It is an honor to be affiliated with DSR for the fifth year,” said Bill Jones, Vice President of Hangsterfer’s Metalworking Lubricants.

“We are thrilled to enter into our second year as an associate sponsor of Antron Brown and the Matco Tools/U.S. Army/Toyota Top Fuel dragster. As Antron always says, ‘us Jersey boys stick together,’” added Jones of Hangsterfer’s New Jersey headquarters, which proudly boasts more than 80 years of metalworking application production.

“I’m really excited Hangsterfer’s is back on board for another year and stepped up their support even more,” said Brown, a three-time Top Fuel world champion.

“They definitely bring the performance value of all of our DSR race teams to another level, with all that they do for our CNC shop. From the coolants, to the lathe lubes, and now to the Rust Coat 40, they have so many great products that not only keep us going but take us to the next level. That’s what you need out of a partner, and we’re so proud to be a part of their great family and to build and grow stronger with them. That right there is what wins championships.”

Hangsterfer’s firmly believes in ‘family first,’ and they continue to prove their family values sentiment with their ongoing support of Brown’s eldest son, Anson, and his Jr. Drag Racing career.

The company, which specializes in the research, development, and manufacturing of metalworking lubricants, will also embark on its second year of providing major sponsorship for brothers Matt and Zach Sackman and their family’s 200-mph Top Dragster. Sackman is the cylinder head specialist on Brown’s championship Top Fuel team.

“We’re a family-owned business, as is DSR. It gives us great satisfaction to be able to support and thrive with another family. Each and every employee at DSR is family to us. Our relationship means the world to me,” said Jones.

“New for us this year is our increased sponsorship of Tommy Johnson Jr. and the Make-A-Wish Funny Car.  We are thrilled to add such a great team to our ever-growing support of the sport, and we look forward to a winning season.”

Johnson, a 15-time Funny Car winner said, “So glad to work with such a great company. Not only are they great people, their products are second to none. Having them on board with us will only elevate our program. Not only do we use their products with the race team, I also use them personally in my shop at home.”