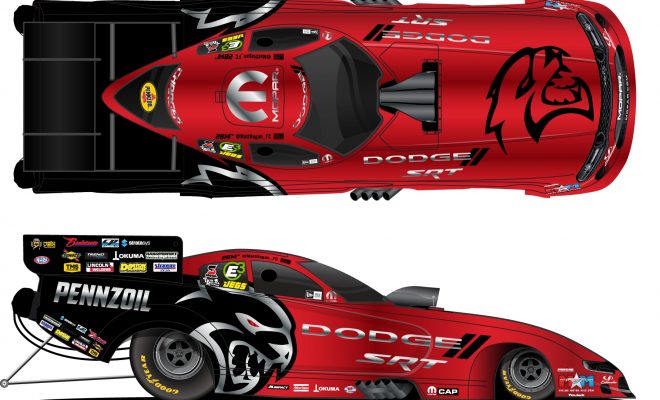 The Mopar Dodge//SRT Funny Car of Matt Hagan and Mopar Dodge//SRT Top Fuel Dragster of Leah Pruett will be sporting new “Demon-possessed” SRT Hellcat Redeye paint schemes to battle the “dog days of summer” – traditionally associated with the start of a month of high heat, drought and adversity – that begin this weekend with the Lucas Oil National Hot Rod Association (NHRA) Summernationals in Indianapolis. It is the second of two consecutive national events at Lucas Oil Raceway to restart the 2020 NHRA schedule after a four-month pause in competition.

The fierce-looking red-and-black paint schemes for the two Don Schumacher Racing (DSR) entries come on the heels of the early July public unveiling of the new 797-horsepower Dodge Charger SRT Hellcat Redeye, the most powerful and fastest mass-produced sedan in the world. With a top speed of 203 mph and quarter-mile elapsed time of 10.6 seconds at 129 mph, the 2021 Charger SRT Hellcat Redeye is designed and engineered to appeal to muscle car enthusiasts who want even more — more power, more performance and more bragging rights at the drag strip.

After driving away with bragging rights and a Wally trophy of his own by earning his first national event win of the season at this past Sunday’s E3 Spark Plugs NHRA Nationals, Hagan is looking forward to trying to repeat that performance aboard his new-look Mopar Dodge Charger SRT Hellcat Redeye this weekend.

“It’s beautiful and those colors really pop and I think it’s going to look great at 330 mph, so don’t blink,” says Hagan, whose speed has earned him two No.1 qualifier awards this season to date. “It’s one of those deals where Dodge has always come out with some awesome schemes, the coolest and fastest cars. I love that they really give me an opportunity to engage with the fans and the stuff they sell on the showroom floor. Dodge always comes out with some cool stuff and I’m excited for fans to see it because I love it. It’s an amazing paint scheme.

“My Hellcat Redeye Funny Car might be faster and more fun to drive,” adds the two-time Funny Car world champion, “but when you have a production car that you can grab off the showroom floor and take it out there, that’s pretty awesome. It’s pure power. It’s probably the closest you can get to what we’re drag racing, having that raw power in the palms of your hands and underneath you.”

Pruett is also looking forward to showing off the new Dodge//SRT Hellcat Redeye look on her DSR Top Fuel dragster.

“I’d like to say that I’m surprised how good it looks, but I’ve come to expect nothing but the remarkable from Dodge when it comes to showcasing their cars,” says Pruett. “They stand out on the racetrack and they stand out when it comes to how the cars look and how they perform. It makes me feel like when you’ve got a really nice dress and your dancing shoes on and you look hot-to-trot, then you go and have a good night out on the town.

“They’ve actually simplified that paint scheme into something that really pops with the chrome detail and that flat black is simple and refined,” says Pruett. “While I love my blue Mopar for how sleek and cool, like with a lot of o’s cool it is, this Redeye is spicy hot.”

After reaching the quarterfinals in the NHRA’s return to the drag strip last weekend, Pruett is also hoping to harness some of the energy she feels comes with the new Redeye look to maintain her top-five position in the Top Fuel point standings.

“This Redeye dragster is going to have a good weekend. I can just tell. There is an aura about it. The Redeye stands for ultimate power and it’s a way for us to be able to relate to those Redeye owners. It’s a new version for us to highlight. We had the 1320 and the Demon and I personally have driven a couple of Redeyes and wish I had one of my own. I feel that we are going to not only look good but do well,” says Pruett. 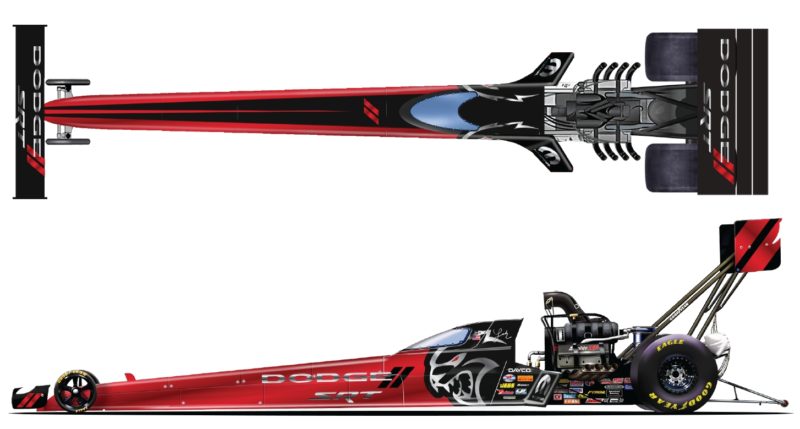 The Dodge Charger SRT Hellcat Redeye-themed paint schemes will remain on the two DSR entries through the next two scheduled NHRA events, including the Dodge Mile-High Nationals at Bandimere Speedway near Denver, Colorado, on Aug. 7-9.

Pruett is also slated to get back behind the wheel of her Mopar Challenger Drag Pak this weekend to compete in the season debut of the rescheduled 2020 SamTech.edu NHRA Factory Stock Showdown.

While development of the new-generation Challenger Drag Pak continues, its release has been postponed to 2021 due to the challenges associated with the COVID-19 pandemic. An on-track NHRA debut is now slated for next season. Despite the delay, Pruett is confident that the team can still make some gains through the eight scheduled events.

“Coming back to racing has brought some sense of normalcy back and getting back in the Drag Pak is one of my favorite places to be on earth,” says Pruett. “We were very much looking forward to debuting a new Mopar Dodge Challenger Drag Pak this year, but even though we’re not, we’re still going to be out there entering, qualifying and competing and chasing down a Wally (trophy) with Mopar Dodge//SRT and making as much power as we can, while we can, in the circumstances that we can.”

Heading into the shortened two-day NHRA event, Jack Beckman leads the trio of Dodge Charger SRT Hellcats at the top of the Funny Car points standings that includes his DSR teammate Tommy Johnson Jr. and Hagan, each with a win this season. Ron Capps and his HEMI®-powered Dodge Charger SRT Hellcat sits sixth in points, but is working to change that this weekend at the only racetrack on the circuit at which he has never earned a Wally trophy.

In Top Fuel competition, Pruett will be joined again by Tony Schumacher and Cory McClenathan for the second of their two-event cameos. Schumacher is looking for his 85th Top Fuel event win as the NHRA’s most successful Top Fuel pilot of all time, while McClenathan is in the hunt for a 35th career victory, which would tie Mopar legend Don Garlits’ 35 NHRA wins.

Qualifying highlights will air on FOX Sports 1 at 7 p.m. Eastern on Saturday, July 18, while Sunday’s elimination rounds, including live action, will be broadcast on the FOX national broadcast network starting at noon Eastern.