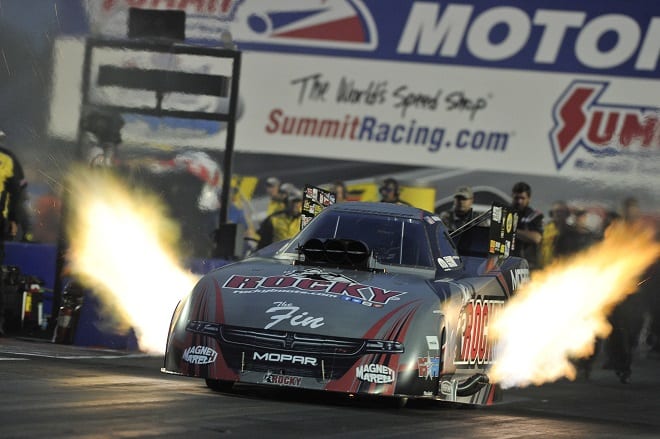 Defending Funny Car world champion Matt Hagan (above) continued his recent hot streak by powering to the qualifying lead Friday under the lights at the Summit Racing Equipment NHRA Nationals.

Hagan, who won the most recent event in Bristol and is the current series points leader, raced to a track record performance of 3.986 seconds at 322.96 mph in his Rocky Boots / Mopar Dodge Charger R/T. His three-second run was the first one in Funny Car at the popular northern Ohio dragstrip.

“To go out there and put a three on the board is huge for us,” said Hagan, who has two No. 1 qualifiers this season and 19 in his career. “I think we’ll see some more threes tomorrow, so I am not sure if that will hold for us. If someone runs quicker you just go over and shake their hand and tell them good job. It was cool to put a three on the board for these fans. We’ve got a great race car and a great team right now. Dickie Venables (crew chief) is the guy and I wouldn’t trade him for any amount of money. He’s the guy and I am tickled to have him in my corner.”

Massey raced to a track record time of 3.741 at 323.74 to lead Top Fuel qualifying in his Red Fuel dragster. Massey is looking for his second No. 1 of the season and ninth of his career. 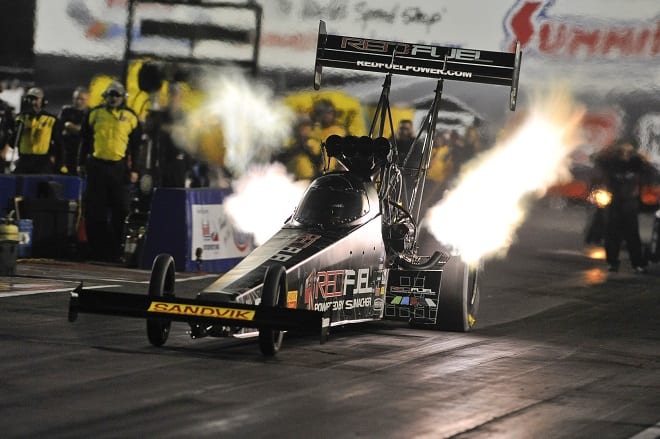 “We knew the conditions were out there,” Massey said. “At the eighth-mile I could feel the clutch come in and I knew I was on a ride. I knew the track record was going to be there for the taking this weekend. We’re also going to have another night session tomorrow so everybody will have another chance to go after it again. I am happy to be No. 1 now, but I want to stay there.”

Second-generation racer Gray paced the Pro Stock order with a 6.542 at 210.93 in his Gray Motorsports Chevy Camaro. The younger brother of Shane Gray and son of veteran racer Johnny Gray, he is still looking for his first No. 1 qualifying position in his second season. 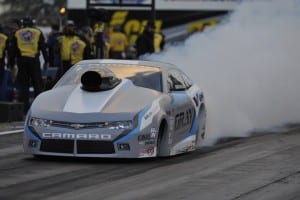 “We’ve got the stuff to do it and we’ve always had the tools to make it happen and it’s just been a matter of timing,” Gray said. “Like last year I think we‘re getting to that point where we need to start running good and be ready for the Countdown. I was surprised at the run because the car went left. I didn’t think it would run that fast going left. It was loose and when that told me it went 54 I was like, ‘Wow.’ That was pretty impressive for as much moving around as it was doing. I am really proud of the guys. They’ve been working hard and maybe it’s starting to pay off. Hopefully that will hold up. Since we run the same time tomorrow, I’m not sure, but maybe it will.”

Chris McGaha is second with a 6.543 at 211.33 in his Harlow Sammons Racing Chevy Camaro and Vincent Nobile sits third in his Mountain View Tire Camaro with a 6.551 at 210.93. Series leader and defending world champ Erica Enders is seventh in her Elite Motorsports Camaro with a 6.564 at 211.13.

In Pro Stock Motorcycle, Arana Jr. also took advantage of the unseasonably cool conditions to power his Lucas Oil Buell to a leading effort of 6.868 at 195.79. 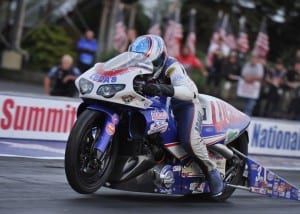 “The conditions got really good,” Arana Jr. said. “We made an adjustment from our first run and it all came together and we were able to make a nice pass. As soon as I popped the clutch and felt the bike leave as hard as it did I knew it was a good run. I was anxious to get down there and see how quick it ran. When I heard it was an 86 I was surprised.”

Chip Ellis was second with a 6.905 at 195.70 on his Pippin Racing Buell and Jerry Savoie was third on his Savoie’s Alligator Farm Suzuki with a 6.917 at 193.27. Screamin’ Eagle Vance & Hines Harley-Davidson riders Eddie Krawiec and Andrew Hines were fourth and fifth in the order.

Qualifying continues Saturday with sessions at 5 and 7:45 p.m. for Sunday’s 11 a.m. eliminations.