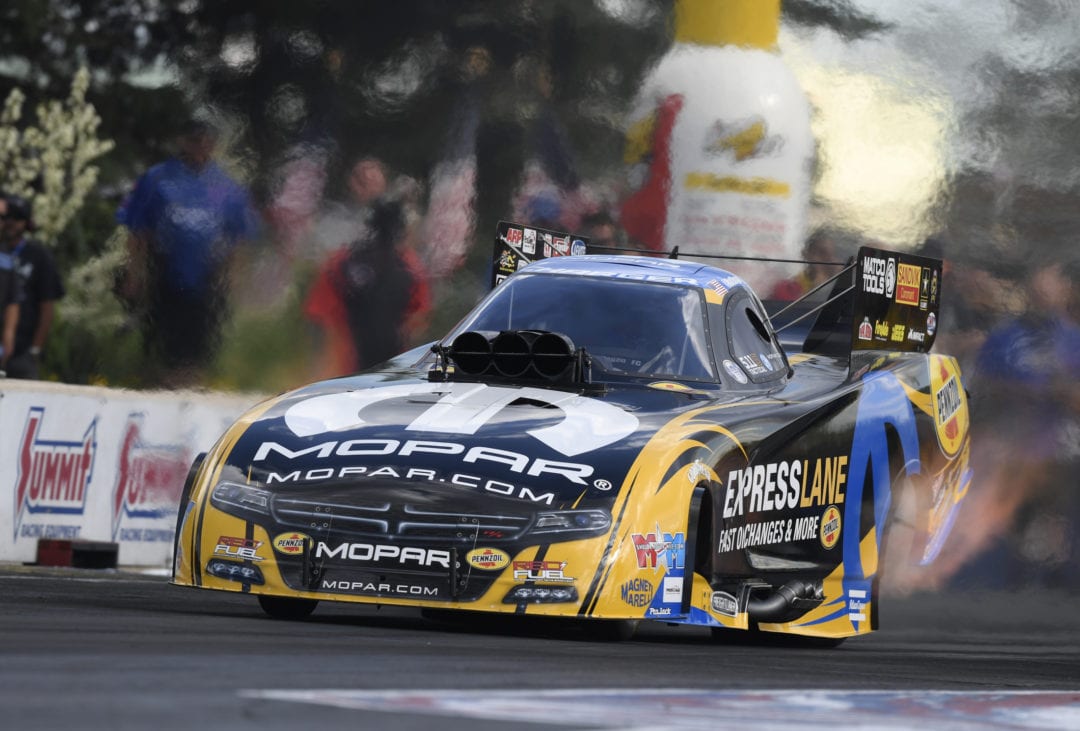 Hagan secured the top spot after setting the track elapsed-time record with a pass of 3.865-seconds at 333.33 mph in his Mopar Express Lane Dodge Charger R/T during the second session Friday night.

“I feel pretty good about this track and this car, so we definitely feel like we have an opportunity to turn on four win lights tomorrow,” Hagan said. “We know we need to put this car in the winner’s circle a few more times to move to the top spot in the standings, and that’s really what we are trying to do.”

Robert Hight set the track speed record at 334.65 with a 3.870 during his second qualifying session on Friday in his Auto Club of Southern California Chevy Camaro to sit at second at the conclusion of the qualifying rounds. Teammate John Force qualified third after a 3.911 at 319.98 in his PEAK Chevy Camaro.

Kalitta maintained his advantage atop the Top Fuel category with an elapsed time track record run of 3.709-second pass at 327.43 mph in his Mac Tools dragster during the second session on Friday night, earning his first No. 1 qualifier on the year and 48th of his career. 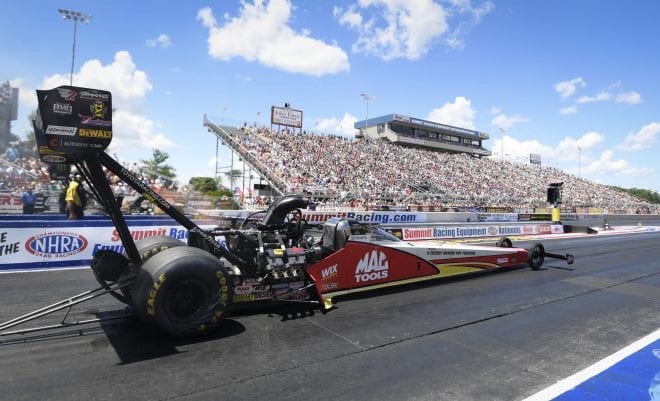 “It’s been awhile since we qualified first and there is no better place than your own backyard for Kalitta Motorsports,” Kalitta said. “We’re looking forward to carrying that into tomorrow, and we are definitely excited to get racing again.”

Kalitta is now tied for 15th in NHRA history with Antron Brown as each of the active Top Fuel drivers have 48 career No. 1 qualifiers to their credit.

Brittany Force secured the number two slot after a 3.714 pass at 327.66 during her second run on Friday night in her Monster Energy dragster. Points leader Steve Torrence qualified third with a run of 3.715 at 328.46 in his Capco Contractors dragster as he chases his fourth win of the season.

In Pro Stock, Anderson held on to the top spot after driving to a 6.584 at 210.24 pass in his Summit Racing Equipment Chevrolet Camaro during the fourth and final session. He secured his first No. 1 qualifier of the season and the 88th of his career. 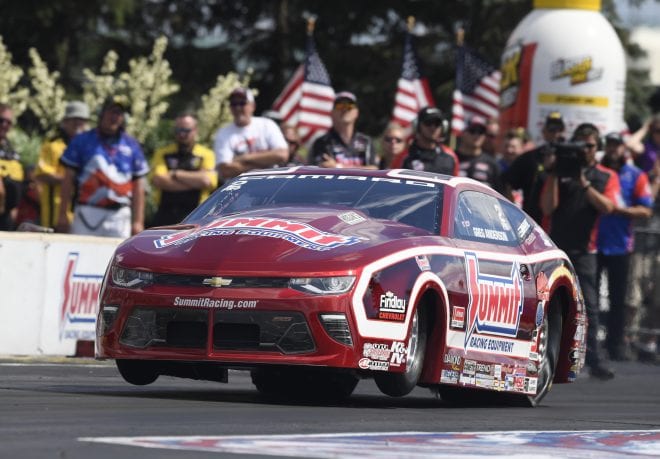 “We knew today was going to be a good day with the improved weather, and the racetrack was great today so we figured we would need to improve our runs from yesterday to stay on top,” Anderson said. “It’s a pretty cool feeling to do that here in front of the home crowd at Summit Motorsports Park, so I’m happy we were able to make it happen.”

Points leader Bo Butner qualified second with a 6.588 at 210.41 in his Jim Butner’s Auto Chevy Camaro. Drew Skillman locked in the third spot after a 6.593 at 209.92 in his Ray Skillman Chevrolet Camaro.

Smith notched the first slot in Pro Stock Motorcycle with a run of 6.824 at 196.16 in his Victory Polaris Magnum during his third qualifying run. He was able to lock down his 25th career No. 1 qualifier and first of the season. 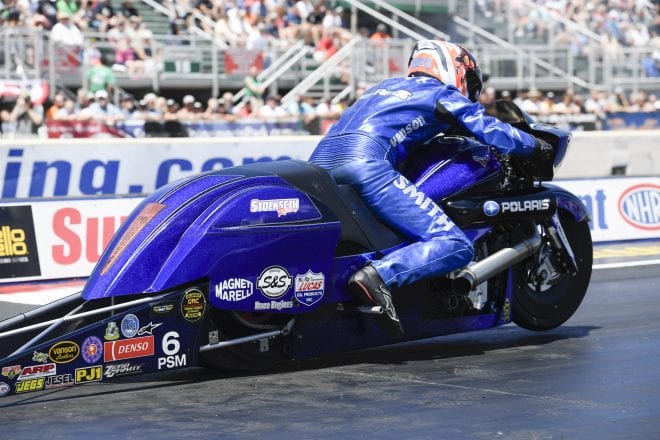 “Today went well, and we didn’t even think we were going to be able to go that fast but my crew did a great job to solve some problems we have had this year,” Smith said. “We have to keep learning and hopefully we can use this as a turning point in the season.”

LE Tonglet notched the second spot in Pro Stock Motorcycle after a 6.847 at 195.36 in his Nitro Fish Racing Suzuki, as he chases his third victory of the season. Hector Arana secured the third qualifying position after a 6.886 at 194.63 in his Lucas Oil Buell.