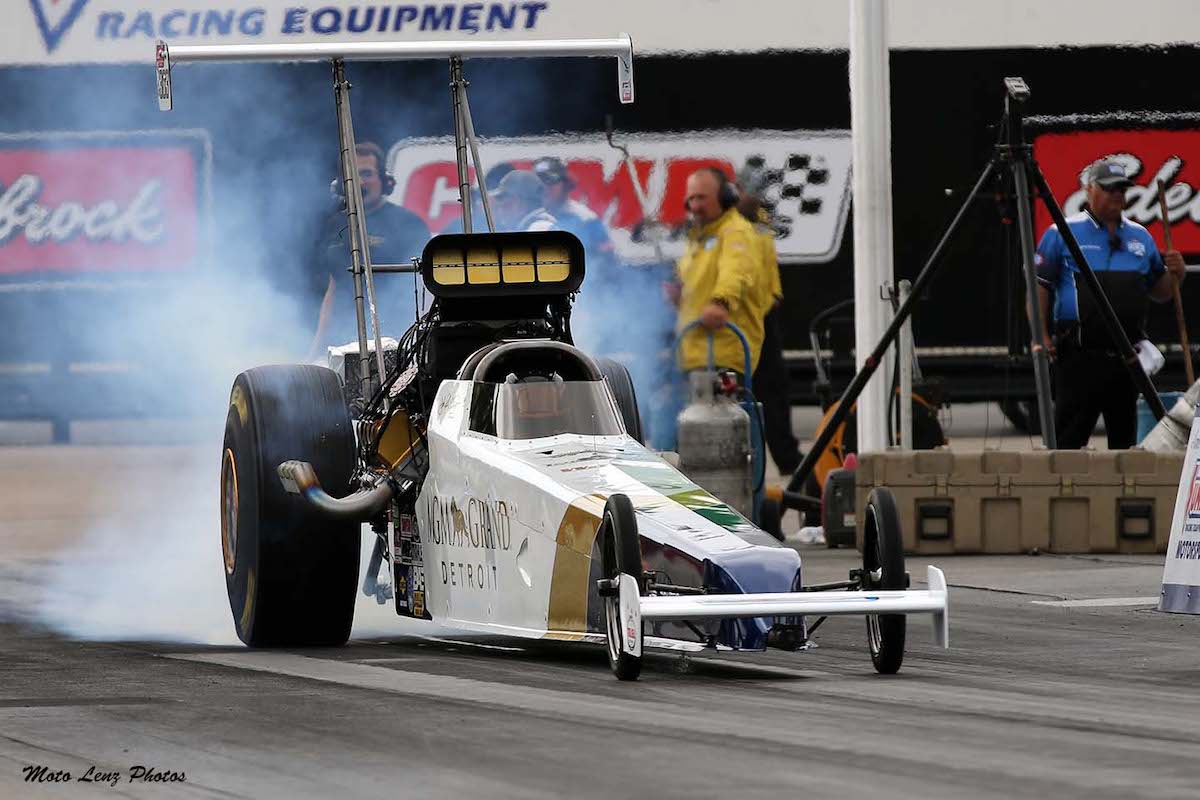 It is with purpose and passion that JP and Phil Gutierrez compete in the challenging Top Alcohol Dragster category.

They are ambitious and adamant, and they continue go even quicker and faster in their high-horsepower and head-turning dragster.

And, with help from the really remarkable Gutierrez Brothers Racing team, driver, JP, and chief mechanic, Phil, did just that at the recent Summit Racing Equipment NHRA Nationals at Summit Motorsports Park in Norwalk, Ohio. JP piloted to a 5.29 and 266 mph to qualify in the eighth spot out of twenty racers and to pick up the team’s personal best in NHRA competition. He won the first round of eliminations with a 5.33, and while he lost in the second round of eliminations when his dragster went into tire shake just off the starting line and he had to pedal it to a 5.77, he and Phil are ready to pick up where they left off at the Cavalcade of Stars presented by Budweiser, this weekend, July 2-4 at Summit Motorsports Park.

Read below what the Michigan-based brothers had to say when we talked with them about their program.

WHAT WILL YOU TELL US ABOUT YOUR PREVIOUS AND NEW COMBINATIONS?


JP: In the NHRA Top Alcohol Dragster class, there are two choices for engine types, injected nitro or supercharged engines that run on methanol. Gutierrez Brothers Racing has utilized the supercharged engine combination since we started in the Top Alcohol Dragster class in 2012. Prior to the 2021 season, we were running a 483 cubic-inch Alan Johnson Performance Engineering billet Hemi engine with a PSI screw supercharger. Beginning in 2021, we are running a 465 cubic-inch Brad Anderson Engineering Billet hemi engine with a PSI screw supercharger. The new engine combination for the 2021 season enabled us to run 5.29 and 266 mph at this past weekend’s Summit Racing Equipment NHRA Nationals event, which is a career best for GBR.

YOUR HARD WORK IS PAYING OFF. WHAT COMPELLED YOU TO CHANGE YOUR COMBINATION, AND WHAT WAS INVOLVED?


JP: The results in 2019 were not where we wanted them to be from a performance and consistency standpoint. The overall uncertainty in 2020 ended up keeping GBR away from the racetrack for the entire year, and during that time, we really took a long look at the dragster and engine combination. The 2019 version of the GBR dragster was well past the minimum weight requirement which is why we built the larger 483 cubic-inch engine. After reviewing all of the potential options, the direction we chose to move forward with was a smaller 465 cubic-inch engine and reducing the overall weight of the dragster to get closer to the minimum weight. We began selling our previous combination engine components at the end of the 2019 season and had all the new components from BAE by the fall of 2020, which put us on track to compete in 2021. 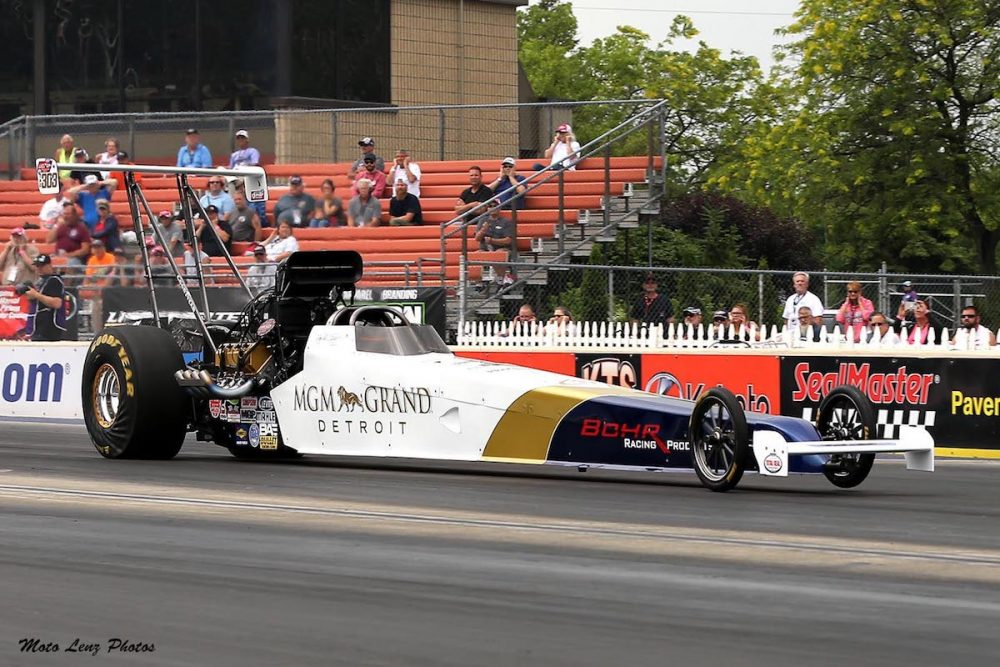 DID YOU UPGRADE YOUR CHASSIS AS WELL?

HAVE YOU BEEN ABLE TO TAKE PART IN TEST SESSIONS THIS YEAR, OR HAVE YOU HAD TO TEST WHILE RACING?

JP: Up to this point, we have competed at the Summit Racing Equipment NHRA Nationals this past weekend, and we were able to test twice prior to that event. The first test session was at Summit Motorsports Park in May, and we were able to complete several passes, with the fastest being a 5.25 and 272 mph. Our second test session was at U.S. 131 Motorsports Park, and we completed several laps in the mid-5.30s. The two test sessions prior to the NHRA event at Summit Motorsports park put us in a position to deliver our career-best NHRA competition performance of 5.29 and 266 mph.

WHAT DO YOU ENJOY MOST ABOUT TAKING PART IN THE CAVALCADE OF STARS PRESENTED BY BUDWEISER AT SUMMIT MOTORSPORTS PARK?

PHIL: The Cavalcade of Stars is really the highlight of our season each year. Summit Motorsports Park is a top-notch facility and the Summit Motorsports Park team does an outstanding job promoting the race and making the Sportsman racers the featured attraction for this race weekend. In addition to the facility, we really enjoy interacting with all of the awesome fans in the autograph sessions and in the pits between the action. There’s just a certain energy to this race weekend that you can’t explain unless you’re at the track.

WHAT DO YOU HOPE TO ACCOMPLISH AT THIS EVENT, AND THIS YEAR IN GENERAL?

PHIL: For the Cavalcade of Stars, we would like to continue to build our knowledge of the new engine and updated chassis combination, and deliver competitive and consistent laps that take us from A to B. There will be a lot of fast Top Alcohol Dragsters on the property this weekend, with many of the teams staying over from last weekend’s NHRA event to compete at the Cavalcade of Stars, and we will need to put forward our best performance to get in the top eight and get an opportunity to race on Sunday. We will run a limited race schedule in 2021, with the National and Regional events at Summit motorsports park really being the focus of our season. Our plan is to utilize the 2021 season as an overall test session and build up our performance to be able to expand our schedule going forward and compete in races beyond the Midwest.

GUTIEREZ BROTHERS RACING IS AN IMPRESSIVE TEAM. WHO HELPS ALONG THE WAY?

PHIL: The biggest help has always been our family. It started at a young age with our parents, David and Laura Gutierrez, supporting us on our NHRA drag journey from Junior Dragster all the way to Top Alcohol Dragster, and it continues today as they are with us each and every race weekend at the track. We also couldn’t be where we are today without the support of our spouses, Kara Gutierrez, who is JP’s wife, and my wife, Lauren Gutierrez, as they have both supported us through thick and thin and they have given us all of the needed pep talks and kicks in the behind along the way to keep us motivated and moving in the right forward direction both on and off the track. Our parents and our spouses are a big part of the equation that got us to where we are today, but the crew members who help get us to the starting line are they key pieces of the puzzle each race weekend. We have been lucky enough to have a team of crew members over the years who provided us a safe and reliable dragster each weekend. A special thanks to Kevin Kolomyjec, Kevin Favero, Tony Tierney-Rendon and Shawn Dill for all of the work they have put in to make the GBR dragster what it is today. 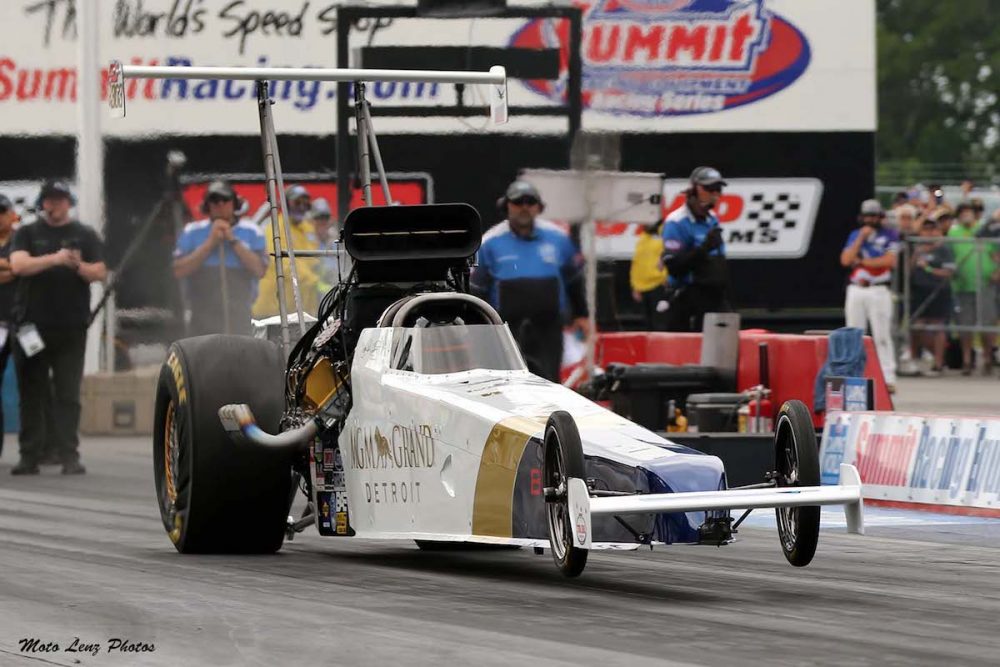 JP: Absolutely. We would like to thank the entire team over at the MGM Grand Detroit Casino and Hotel for the support that they have provided GBR over the past six seasons. We really enjoyed carrying the MGM Grand Detroit colors one last time at this past weekend’s Summit Racing Equipment NHRA Nationals and delivering a career best elapsed-time, mph, qualifying position and first National event round win to the MGM Grand Detroit team. We would like to welcome our new marketing partners for the 2021 season, Bohr Racing Products and MVM by Galot, to the GBR family. The support from Bohr Racing Products and MVM by Galot has allowed us to put some of the most advanced parts and technology available on our dragster to help us get down the track that much faster. We would also like to thank Lettering Inc. in Livonia, Michigan and JT’s Auto and Cycle in Charleroi, PA for keeping the GBR dragster looking sharp on the track. The GBR team wouldn’t be where we are today without the partnerships we have formed with these outstanding organizations and companies we have worked with over the years. We look forward to building these partnerships for the 2021 season and beyond.

(The Cavalcade of Stars presented by Budweiser is this weekend, July 2-4 at Summit Motorsports Park, 1300 State Route 18, Norwalk, Ohio. For more information or tickets, call 419-668-5555 or visit www.summitmotorsportspark.com.)