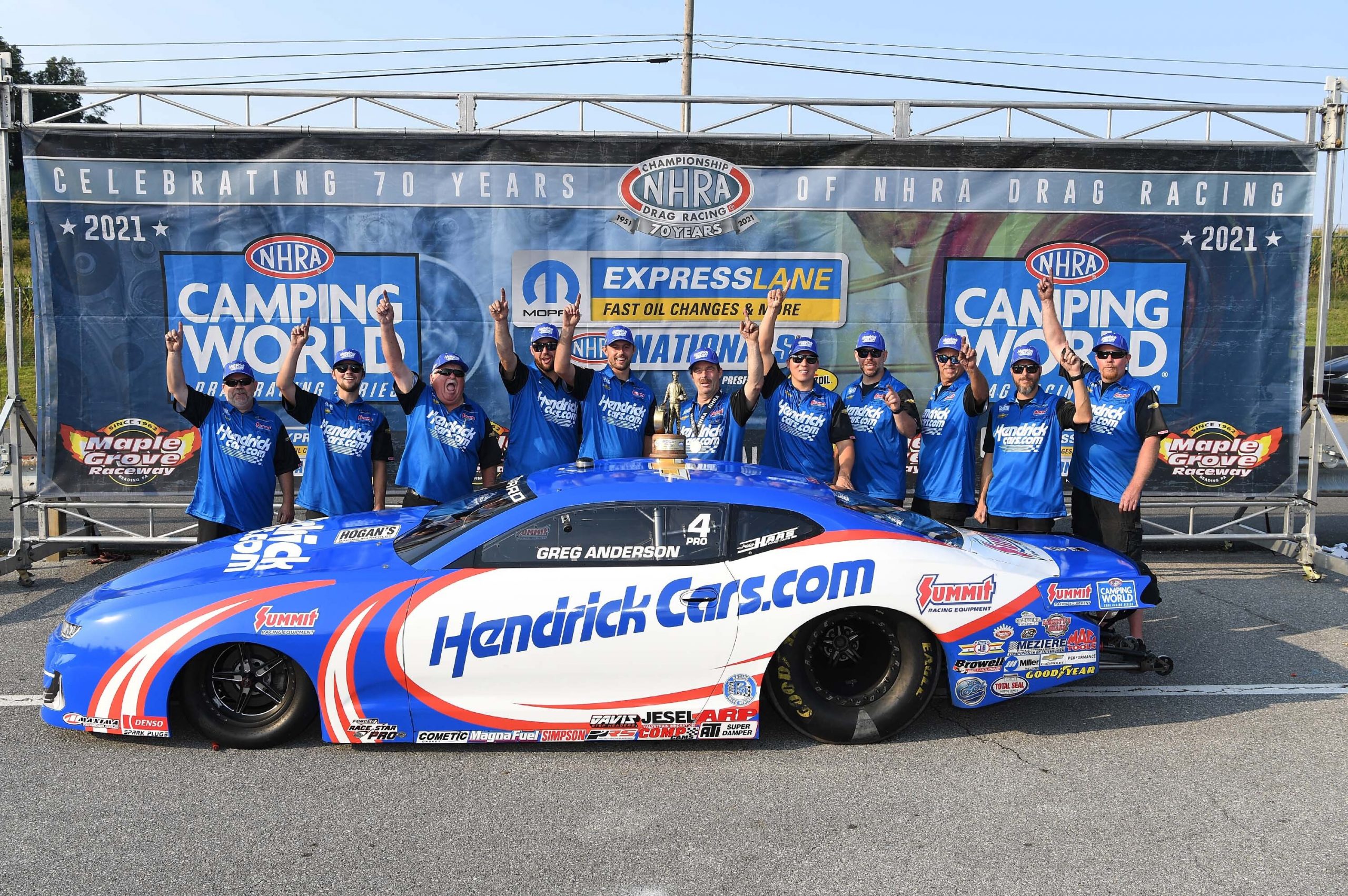 Greg Anderson looked to be unstoppable as he entered the 2021 season of NHRA’s Camping World Drag Racing Series. The four-time NHRA Pro Stock champion claimed the first trophy up for grabs this year, and with it, the points lead, which he held all through the regular season.

Anderson won again just two races later, in Atlanta, and in the 11 races that preceded the NHRA Countdown to the championship playoffs, he was the No. 1 qualifier eight times. The veteran driver reached a total of five final rounds, but the moment that mattered most seemed just out of reach.

This weekend, though, all of that changed as Anderson won the Mopar Express Lane NHRA Nationals at Maple Grove Raceway to tie Warren Johnson as the most winning Pro Stock driver in NHRA history.

“I don’t know where to start,” said Anderson, who claimed the 97th win of his Pro Stock career with a final-round defeat of Erica Enders. “It was a big day. A lot of things happened today, and we tied Warren Johnson, how about that? I respect the heck out of him; I learned a ton from Warren, and to be tied now – this just feels fantastic.

“I kept dropping the ball after winning Atlanta earlier this year, I couldn’t seem to get the job done, but you have to keep going. You have to keep doing what you’re doing, and you can’t give up. It was a great day today, and to get HendrickCars.com and Hendrick Automotive Group the win was really special.”

Everyone knows that the Countdown to the Championship can change everything. The points are reset, bringing the top competitors into a tight bunch and erasing any sizable lead that one may have over the other. It’s a fresh page, a clean slate, and it’s an opportunity for anyone to emerge as a leader.

In-coming points leader Anderson was clearly having none of that, though, and he started the weekend at Maple Grove Raceway, the first race of the Countdown, by claiming seven bonus points as one of the fastest cars in qualifying. Ultimately, Anderson raked in more bonus points than anyone else and was the No. 2 qualifier, and by the conclusion of Sunday’s action, he had extended his points lead by two rounds.

“That’s a good start, and yes, everyone in the Countdown to the Championship has that one big goal in mind, but you just have to stay focused on your own game,” said Anderson. “You run your own lane every round, and you have to forget that there’s even somebody in the other lane. It doesn’t matter who you’re racing or what the points are at any given time. You’re racing that Christmas tree and that racecar. If you do anything other than that, you’re going to mess up.”

In the first round of eliminations at ‘the Grove,’ Anderson got the nod when John Gaydosh was unable to make the run after his parachutes shook open. Anderson wheeled his HendrickCars.com Chevrolet Camaro expertly down the quarter-mile to a 6.555-second pass at 208.55 mph that was low elapsed time of raceday and top speed of the round.

“It’s been a tough run the last few races, but we really haven’t been that far off,” said Anderson. “I just had to stick to my game, keep doing what I was doing, and clean up some of the details. We were able to do that today, the boys hit it on the nose for the final, and it feels pretty darn cool to make history.

“To reach this milestone with HendrickCars.com on the side of my Chevrolet Camaro means so much to me, and I want to thank Rick Hendrick – thank you so much, Boss. Next week, we get to race in front of Mr. Hendrick and everyone from Hendrick Automotive Group, and we just can’t wait.”

The next event on the NHRA Camping World Drag Racing Series schedule is the DeWalt NHRA Carolina Nationals at zMAX Dragway in Concord, North Carolina, September 17-19.