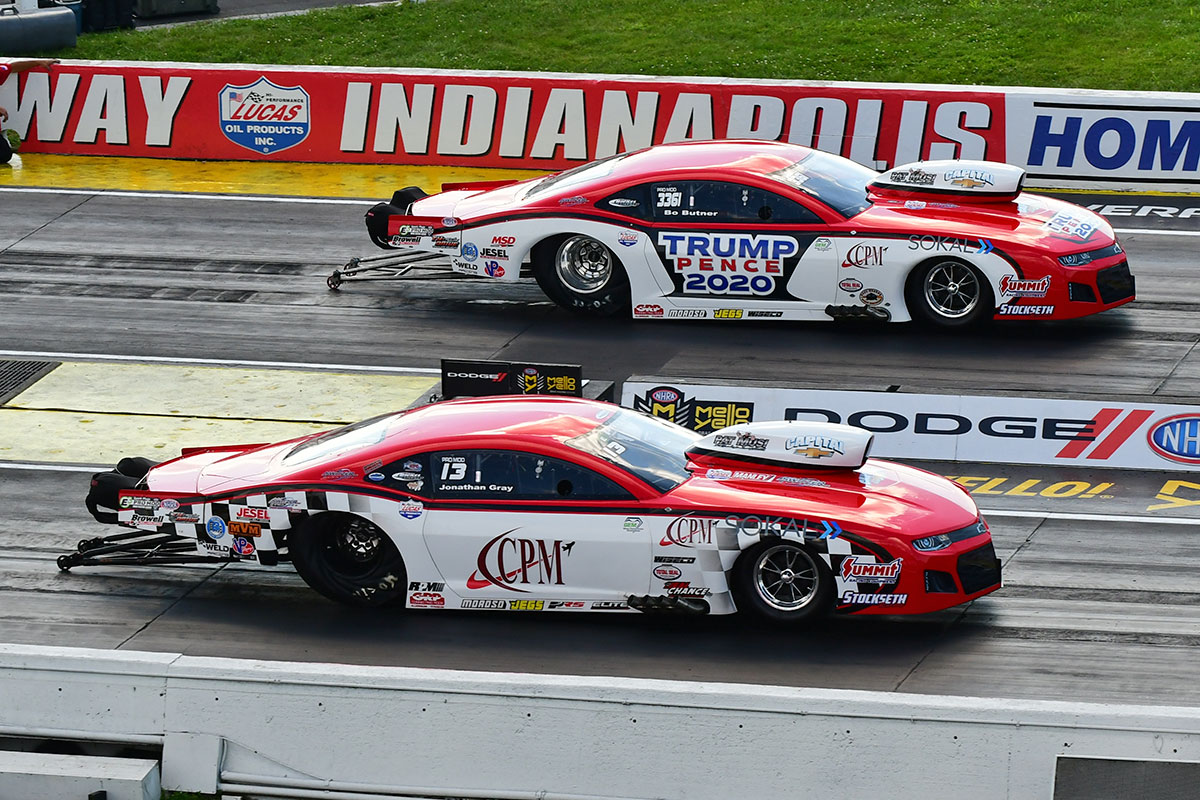 Driving a Musi-powered nitrous Camaro and filling in for multi-time champ Rickie Smith, who is still on the mend following back surgery, Gray went 5.850-seconds at 249.49 mph to defeated teammate Bo Butner, who also used Musi power to reach his first career final round in the class. It gave Pat Musi Racing Engines the perfect scenario of a winning car no matter who crossed the finish line first, continuing the strong 2020 campaign for Musi-powered customers.

“It was a win-win for us with that final round, and that brings you a lot of satisfaction,” Pat Musi said. “We’ve continued to work on our quarter-mile program and our cars are running well. Rickie and the drivers did a great job. It takes the whole team to make this thing work, and that means good drivers, a good setup and a good tuner. Everybody did their job and it was great to see.”

Gray’s second career NHRA Pro Mod victory follows the season-opener in the class, where Chad Green took his Musi-powered Corvette to the final round. That race will be completed at the upcoming U.S. Nationals, but presents the opportunity for Musi customers to win the first two races of the year.

With Butner reaching the final round in just his second career NHRA Pro Mod race, it also means three of the four finalists in 2020 have been Musi customers. That’s a nod to the continuous work Musi and his talented team have done on their popular 903 cubic-inch engine. Working closely with Smith, Musi continues to push the envelope on what’s possible with nitrous power.

“We’ve really worked hard on that motor combination and it’s really come a long way,” Musi said. “It’s a pretty new combination and we’re really happy with it and the improvements we’ve made. Rickie gives us great feedback, and Dean Marinis does a great job working with Chad. It’s been a really good deal for us.

“It’s all about laps and working on the motors nonstop and that’s all I do. Between Dean and Rickie, we’ve got good guys tuning and the work in the shop is nonstop.”

It’s all shown up on the track this year, as Tommy Franklin has impressed on the PDRA scene, while Gray’s victory marks the latest triumph.

He went through two former world champs to reach the final round in Indy, staying in the 5.80s for most of the weekend. That consistency is key in a class as talented as NHRA Pro Mod, and Gray lauded the reliability of Musi’s powerful 903 cubic-inch engine.

“Between Pat and Rickie, they’ve been working together a while, they’ve got a good combination and it really works,” Gray said. “They’ve got it where the car runs really good and it’s super reliable. It doesn’t really hurt itself and that’s a big thing.”

It’s not something Musi takes for granted, but the legendary racer and engine builder is also not afraid to tout the triumphs of the nitrous cars.

“The nitrous racers out there are the best in the business,” Musi said. “They win races because they are among the best racers in the world.”