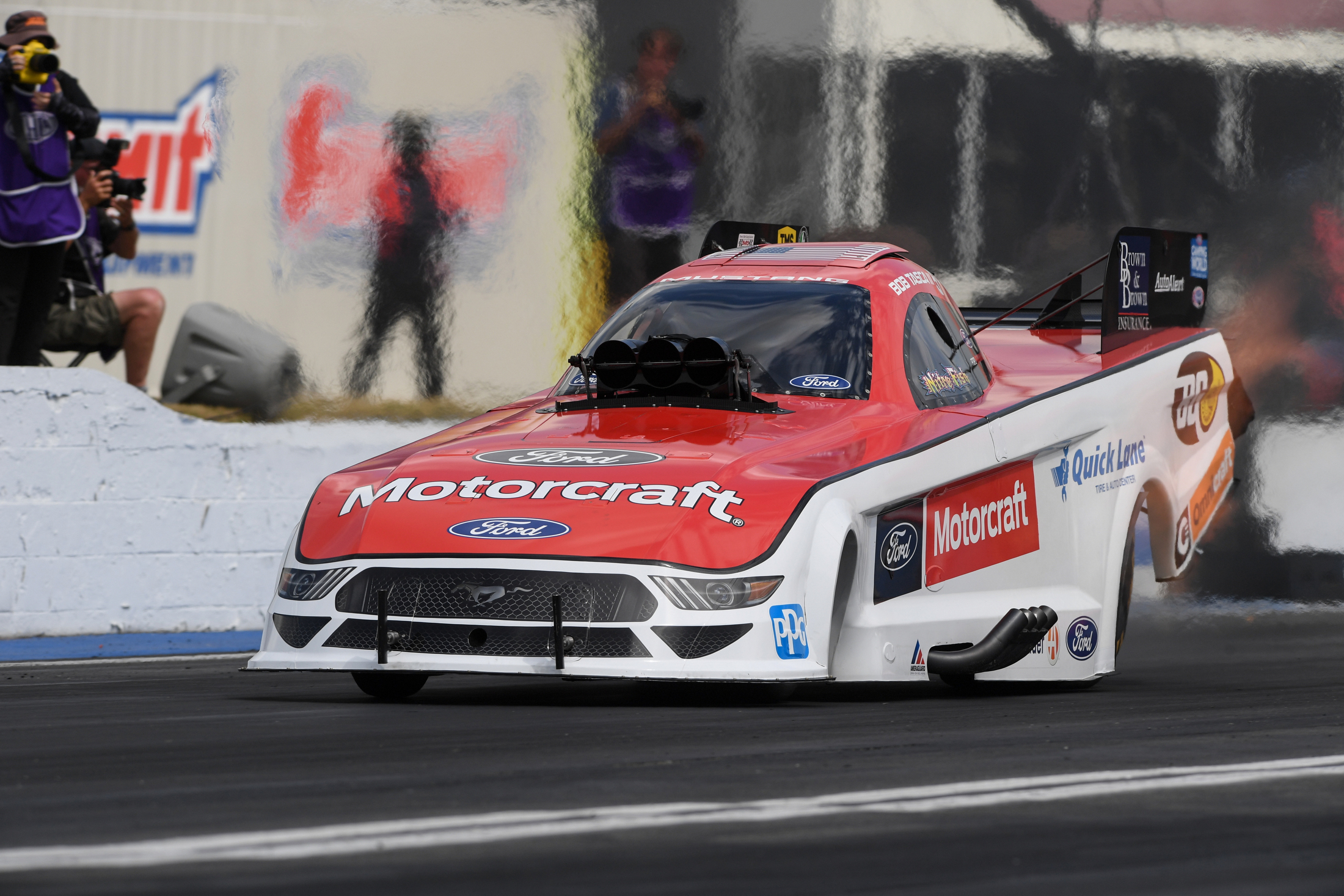 It’s been a terrific start to the 2021 NHRA Camping World Drag Racing Series for Bob Tasca III, but the Funny Car points leader knows a surefire way to make it even better. It would include winning at the track where he made his first pass in a car, which is New England Dragway and the site of this weekend’s TascaParts.com NHRA New England Nationals presented by Bandero Premium Tequila.

Tasca has already put together two wins through five events in his 11,000-horsepower Motorcraft/Quick Lane Ford Mustang and has held the points lead for the first time in his career. A great next step would be picking up his first Funny Car victory at his home track, the place that started it all for Tasca. With plenty of friends and family on hand, Tasca has big hopes he can pick up what would be a memorable third win already in 2021.

“I can’t tell you how many requests I’ve had for tickets, but this is a special place for me,” Tasca said. “It’s the first track I’ve ever went down, and I’ve won here in everything but my Funny Car, so hopefully we can change that. You can feel the pent-up demand from fans going around the country this year. They’re excited to see us back and racing again, and this area has a lot of hardcore fans. It’s a huge market we pull from, and it’s exciting to be one of the hometown people here and seeing all the excitement for this race.”

Steve Torrence (Top Fuel) and Matt Hagan (Funny Car) were winners of the 2019 event, and this year’s race will be televised on FOX, including live finals coverage starting at 1:30 p.m. (ET) on Sunday, June 13. It is the sixth race of the 2021 NHRA Camping World Drag Racing Series and it undoubtedly means a lot to Tasca.

He’s also a sponsor for the race, but to get a win he’ll have to get past the likes of Houston winner Robert Hight, John Force, who won in Charlotte, defending world champ Hagan, who has won the last three Funny Car races in Epping, Ron Capps, a two-time event winner, Alexis DeJoria and Gainesville winner J.R. Todd.

“It’s the first time we’ve sponsored an event and after talking with Alexis with her sponsor (Bandero Premium Tequila), we came together to support the race,” Tasca said. “It’s a big market and a big deal for us. Plus, it’s on FOX, so that adds more drama to it. We’ve stepped up on a big stage this year and we can do it again. We’re going to go out there and give it our best effort, and hopefully we can come away with a win.”

In the Top Fuel ranks, it will be tough to knock off points leader and three-time reigning world champ Torrence, but it would be an ideal setting for young standout Justin Ashley. The 2020 NHRA Rookie of the Year is based in New York, meaning the stop at New England Dragway is the closest to home. On top of that, Ashley is looking for his first victory of the 2021 season in his 11,000-horsepower Smart Sanitizer dragster powered by Strutmasters.com.

Ashley will also be trying to make a notable debut, as the weekend marks the first time he has raced in Epping. Torrence has back-to-back wins at the facility — and two straight wins in 2021 — but Ashley will have plenty of other stars to deal with as well, including previous winners Antron Brown and Brittany Force, Doug Kalitta, Leah Pruett, Shawn Langdon and Clay Millican.

“I am very much looking forward to joining my Davis Motorsports team in Epping for an exciting weekend,” Ashley said. “This will be the first time I race at this particular track and aside from Maple Grove, this is the closest track to my home in New York. All of that gives this race extra significance. But once the race begins, it’s all the same from there.”

It will be Pro Stock’s first appearance at New England Dragway since 2018. Chris McGaha won that event and will try for a second win against the likes of points leader Greg Anderson, defending world champ Erica Enders, Houston winner Matt Hartford and rookie Dallas Glenn.

The race also includes thrilling competition in the NHRA Lucas Oil Drag Racing Series, where future stars of the sport hone their skills. After qualifying, fans can watch the thrilling “Beast from the East” Jet Dragster driven by Ernie Bogue. It marks the first time this dragster has made an appearance at a NHRA event. Jet cars are thrust-driven propelled by jet engines with exciting pre-run flame shows.