Since the fall of 2017, Funny Car racing just hasn’t been the same, thanks to Funny Car Chaos. Twenty-nine events later, over 100 teams from across the country have since participated in the run whatcha’ brung flip top hootenanny which has revived enthusiasm and participation for Funny Car racers and fans from coast to coast. The 2021 season set the bar by hosting the largest Funny Car race in over 50 years, paying out over $250,000 and setting its highest participation numbers to date. The series will carry that momentum into its fourth Championship season in 2022 with a lot to look forward to.

With no regulation on body style, engine combination or fuel used, Funny Car Chaos events attract a wide variety of floppers in their come one, come all approach. Nitro burners, screw blown alcohol Hemis and big power Chevrolets are the most popular setups, but the door is open and has attracted unique twin turbocharged and nitrous assisted combinations. Rumors in the pits indicate we may soon see an injected nitro A/Fuel flopper hit the Chaos scene. The series was created by promoters Chris & Tera Graves to provide a grassroots, affordable and competitive drag racing platform while prioritizing the entertainment value and ground pounding action that funny cars bring to the sport of drag racing.

“Four years ago, we would have never thought the Chaos would have grown to what it is today. But we are very thankful that it has and have a great support system around us of friends, family and racers who share the passion and vision we have for this series. What keeps us motivated most of all is the appreciation we see from our fans and racers. There’s lots of smiles and lots of fun in the pits and that’s what drag racing is all about. This has become a venue for people to live their lifelong dream of being a Funny Car racer. It has rejuvenated a fan base of flopper fans. It has brought crowds back to grassroots racetracks. It’s a win-win-win combination and we are very excited about what lies ahead,” says Chris Graves.

All the cars have names. All the drivers have autograph cards. Every ticket is a pit pass. Back up girls, dry hops, long smokey burnouts, all for a ticket price that costs less than $1 per Funny Car on the property. It’s as close to the good ol’ days as you can get, but with a modern twist. One thing is guaranteed, whatever flavor Funny Car you prefer, you will find it at Funny Car Chaos.

Ken Singleton’s “High Risk” alcohol burner from Chickasha, Oklahoma, will head to the 2022 season opener with an intimidating target on his back as the three-time consecutive series Champion. Singleton felt the heat from his biggest competition in 2021 from Iowan Kirk Williams, who finished number two in the standings just sixteen points from the top. Daniel Butherus, Jade Cook and Tom Furches all claimed hard fought and well-deserved spots in the final top five points standings out of eighty-seven participants. Del Worsham wowed the crowd at the Inaugural Funny Car Chaos Classic at the Texas Motorplex in March, by rocking the series record book with a 3.19 at 275 mph eighth-mile blast. The Motorplex will be the stage to kick off the 2022 racing season as the biggest Funny Car race in the world returns to Ennis, Texas on March 24-26. This event will qualify 32 cars and has guaranteed payouts topping $55,000+. 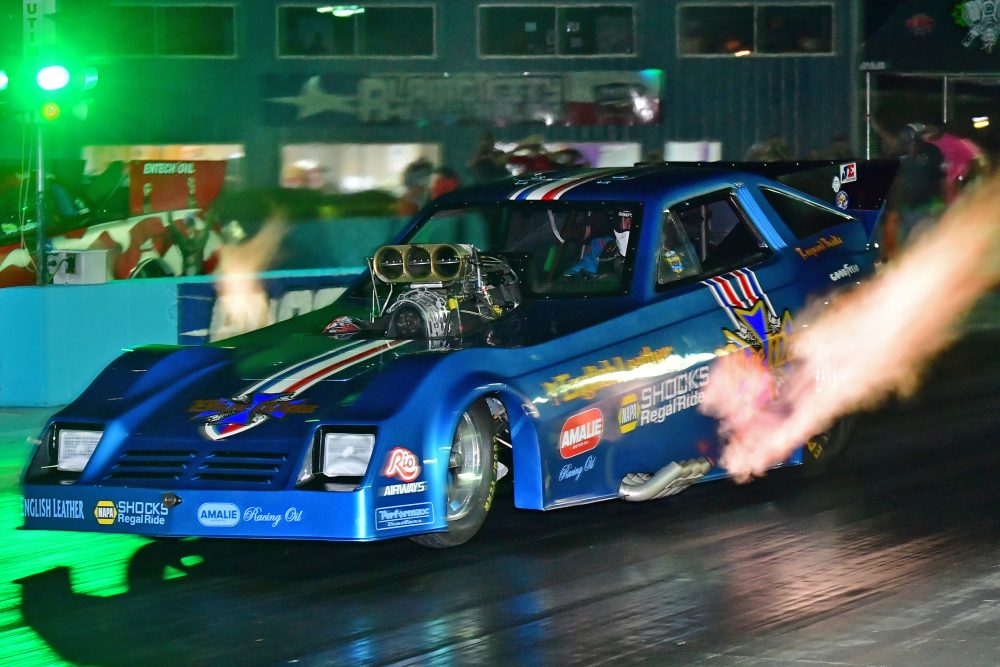 It will be a busy spring for Chaos competitors and a new venue will host the second event of the season as the inaugural Chaos Cajun Nationals will debut at the historic State Capitol Raceway in Baton Rouge, Louisiana on April 8-9. The schedule continues with the first of two stops at Alamo City Motorplex in San Antonio on April 29-30, then heads to Penwell Knights Raceway in Odessa, Texas, on May 20-21 before taking an early summer break and heading to the mid-west.

The summer action starts off with the newest sister-attraction to Funny Car Chaos, Nitro Chaos. It’s the same format, same concept, same rules, but caters to any and all four wheel machines burning nitromethane. June 2-3 at Eddyville Raceway Park and July 15-16 at Mo-Kan Dragway are the two events you will want to witness in person if you’ve got nitro running through your veins (learn more at www.nitrochaos.com).

Funny Car Chaos will also make its highly anticipated debut at Cordova Dragway in Illinois for a non-points exhibition event June 17-18. The FCC points series resumes July 29-30 at Iowa’s Eddyville Raceway Park in the first of back-to-back events, followed the next weekend by a third annual stop at Kearney Raceway Park in Nebraska on August 5-6. The points battles will surely be hot at this point as the series will conclude with its final two events where every round will prove critical to the title contenders. Missouri’s Mo-Kan Dragway welcomes the Chaos to headline the Labor Day Classic on September 2-3 and the 2022 Championship Finals will return to Alamo City Motorplex in San Antonio, Texas on October 7-8.

Spell Paving Services will return as the title sponsor of the Funny Car Chaos Championship Tour with additional support from Wulff Pumps, Fat Tirez Apparel and Red Line Shirt Club which will guarantee 24-car qualified fields across A-B-C classes at all eight events on tour, also guaranteeing payouts of $35,000+ per event.