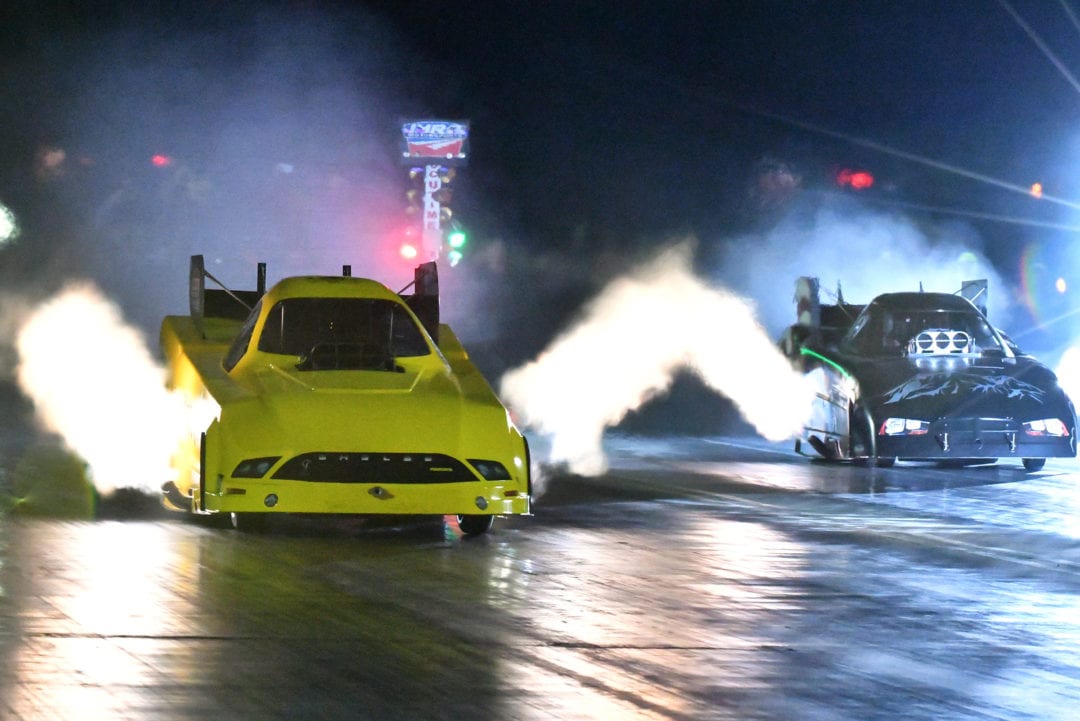 For those who have experienced Funny Car Chaos first hand, the proof is in the pudding that this series is making waves in drag racing. Focused on putting the “Fun” back in “Funny Car” racing, series founder Chris Graves has given dozens of flopper racers a place to race and thousands of race fans a unique and exciting new option for entertainment at the drag strip. This year marked the debut of the Best of Texas BBQ Sauce Funny Car Chaos Championship Tour presented by Red Line Shirt Club. After a successful 2018 campaign hosting four exhibition events, a schedule expansion welcomed a seven-race points tour with stops spanning from Texas to Michigan.

Racers highly anticipated the opportunity to race for a spot in the top five year end points payout and for one, the title of inaugural Funny Car Chaos World Champion, which also comes with a nice payday of $5,000. Racer and fan appeal continues to grow for the series that welcomes a wide array of Funny Cars to compete heads up on the eighth mile, with no restrictions on engine combination or body style, resulting in a grab bag of Funny Car entertainment when the Chaos comes to town. The best six of seven event points totals will be used to determine the top five and with four races now completed, the heat is on as racers head into the final stretch. After three events in Texas and a stop in Missouri, the Chaos hits the road for Illinois and Michigan before returning home to North Star Dragway for the Championship Finals this fall where the season began in March.

Funny Car Chaos hosts a unique sixteen car eliminator, which is split into two fields of eight creating an ‘A’ and ‘B’ field at all events. The points formula gives racers equal opportunity to earn points towards the title regardless of which field they qualify for. Splitting the field into two eight car eliminators provides a more equal playing field in a truly ‘outlaw’ format that allows racers to race the cars they built, the way they wanted to build them, a big plus for these working class grassroots racers. Many teams have hero cards, team merchandise and all welcome fans you and old into the pits to get an up close and personal experience in the pits.

“This series is special for many reasons, but one of the biggest rewards for me is seeing how much the racers and fans appreciate it. These aren’t your ‘professional’ full time touring racers. These are hardworking, 9 to 5 guys and gals who now have a chance to be on the big stage as the main event at drag strips that rarely see Funny Cars or nitro cars of any kind. These racers are saving vacation days from work to attend these events. On Monday mornings, they’re clocking back in to provide for their families. These are real racers, in it for the true love of the sport. Every car has a name, every driver has a smile and watching these teams build a fan base is very rewarding on my end. It’s as close to the good ol’ days as we can get and I can’t thank the racers, fans and our wonderful sponsors all for their support,” said Chris Graves.

Twenty cars were on hand to start the season at North Star Dragway in late March as Illinois based Allan Middendorf and the Jake Sanders tuned “American Outlaw” turned heads with his first ‘A’ field win, while also setting the series elapsed time record at a 3.59. “Dry Hop King” Jordan Ballew scored his first series win in the ‘B’ field to start the season as the tour rolled out of Denton, Texas to its next stop at Mo-Kan Dragway just outside Joplin, Missouri. Twenty-two cars entered the Mo-Kan event and two more first time winners were crowned as Nancy Matter put the Dale Pulde tuned “Guardian” entry into the Rodak’s Custom Coffee ‘A’ field winners circle and Matt Nissen’s Nebraska based “Runnin’ Down A Dream” team claimed victory in the AlkyDigger ‘B’ field.

The trend of first-time winners continued at the third stop on tour as the spring turned to summer and the Chaos invaded historic Amarillo Dragway with a 17-car field. Oklahoma native Brandon Lewis and team “Attitude Adjuster” came into the season with high hopes after the purchase of John Hale’s complete funny car operation, making the switch from Outlaw Pro Mod to Nitro Funny Car and retaining the tuning assistance of Hale’s former tuner Guy Tipton. After finding their groove in the first two events, Lewis and company sealed the deal in Amarillo claiming their first ‘A’ field win, joined by yet another first time Chaos winner Chuck Loftin from San Antonio, who took home the ‘B’ field title in Amarillo. 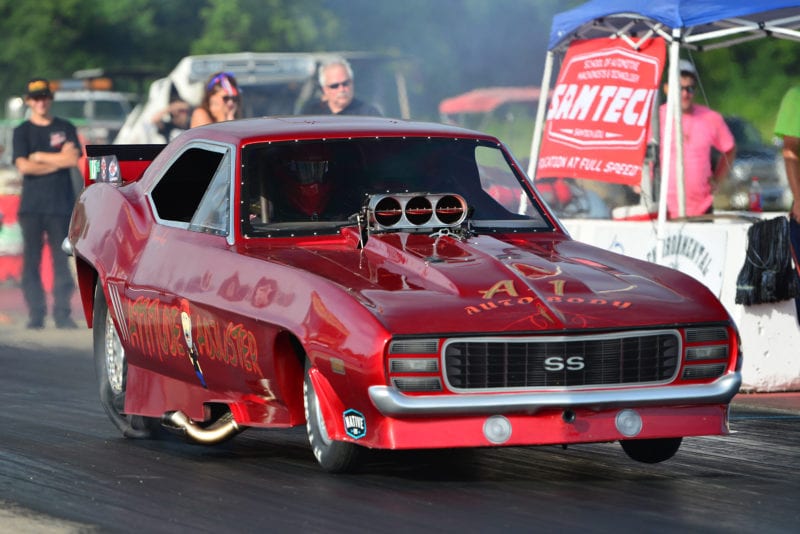 With three races complete, six first-time winners crowned and summer now in full blast in Texas, the tour made its first appearance at Pine Valley Raceway in Lufkin, Texas. Eighteen cars were on the property to entertain a jam-packed crowd, which set a single-day attendance record for the facility. Brandon Lewis kept the winning streak alive and put the “Attitude Adjuster” back in the Rodak’s Custom Coffee ‘A’ field winners circle becoming the first repeat winner of the year, while Dave Gallegos took home his first career Chaos win in the AlkyDigger ‘B’ field in the Kansas based “Nitro Clown” entry.

We’ve got a battle on our hands as we head into the final three events of the season as Funny Car Chaos Championship contenders hit the road and head north to Central Illinois Dragway in Havana, IL on July 26-27 and US 131 Motorsports Park in Martin, Michigan on September 6-7. The one racer who we’ve yet to mention to this point just so happens to be the current points leader and likely the most feared opponent on the property for the competition. Ken Singleton entered three of the four events in 2018 and won all three, so coming into the new season a target was already on the back of the “High Risk” screw-blown alcohol burning Monte Carlo from Oklahoma. 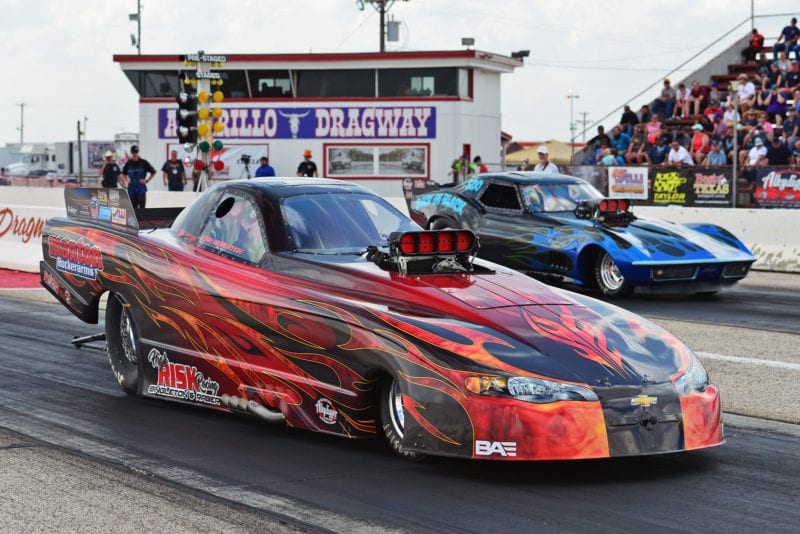 Despite being held off the winners list thus far in 2019, Singleton and company have been racking up precious points by completing all the qualifying sessions, scoring three straight ‘A’ field runner up finishes and qualifying number one at three of the four events completed to this point. It’s nice to be on top, but when Singleton looks down, he’s got a hungry pool of Chaos sharks ready to chomp their way to the number one spot. Brandon Lewis is currently just eighteen points behind, with Jordan Ballew hanging tough in the number three spot, twenty eight points back. Texans Clay Cunningham and Nick Poloson round out the top five at this point, but spots are tight in the middle as eight teams are separated by only thirty seven points from 4th to 11th position.

Eighteen cars are pre-entered into next weekend’s event as Central Illinois Dragway in Havana, IL hosts Funny Car Chaos to headline their 50th Anniversary event. The Northbound schedule will bring a new fleet of Funny Cars to the Chaos mix as teams from Michigan, Pennsylvania, Massachusetts and Canada all plan to compete in the next two events. US 131 Motorsports Park in Martin, Michigan will be rocked by the Chaos September 6-7 at their 15th Annual Funny Car Nationals and big numbers are expected at “the fastest track in Michigan” and both events will feature a strong field from the South as Texas and Oklahoma racers look forward to their first visits to these facilities. It will all conclude at the birthplace of Funny Car Chaos, North Star Dragway in Denton, Texas on September 27-28 as the Inaugural Funny Car Chaos World Champion will be crowned. It’s going to be an exciting second half of the season as 32 racers have competed in the series thus far with many more on the way.