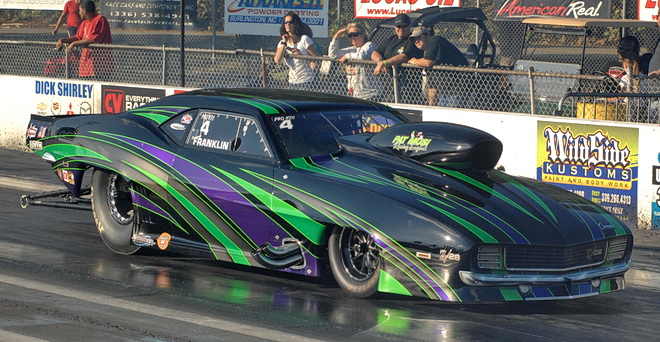 After the final round of qualifying Todd Tutterow sat atop the leader board with a 3.733-seconds run, Franklin and Danny Perry followed close behind with a pair of 3.77 passes, Randy Weatherford posted a career-best 3.797 at 200.62-mph pass, Chris Rini ran 3.801, Jay Cox 3.819 and Quain Stott (yes, THAT Quain Stott) returned to a nitrous-injected car prepared by Steve Vick to nail down the number-seven slot with a 3.852-seconds effort. Travis Harvey rounded out the top eight with a 3.869 to establish the quickest and fastest eight-car qualified field in EOPM history.

Through eliminations, Franklin and Tutterow marched their way into the final, setting up a classic nitrous verses supercharged showdown between the two fastest cars all weekend to crown the event champion. Once there, Franklin proved once again why he is the EOPM points leader, posting a 3.751 at 199.91 mph to beat Tutterow’s fading 5.177 to take the win home to Fredricksburg, VA.

Heading into the event, Franklin and company held a close three-round lead in season points over defending EOPM Pro Mod champion Weatherford and when the tire smoke finally cleared Franklin had extended his lead in the championship battle.

The last exciting EOPM event of the year will be the Dart Machinery EOPM Nationals, held in memory of Stuart Williams and Kevin Bowen Nov. 1, at Virginia Motorsports Park.