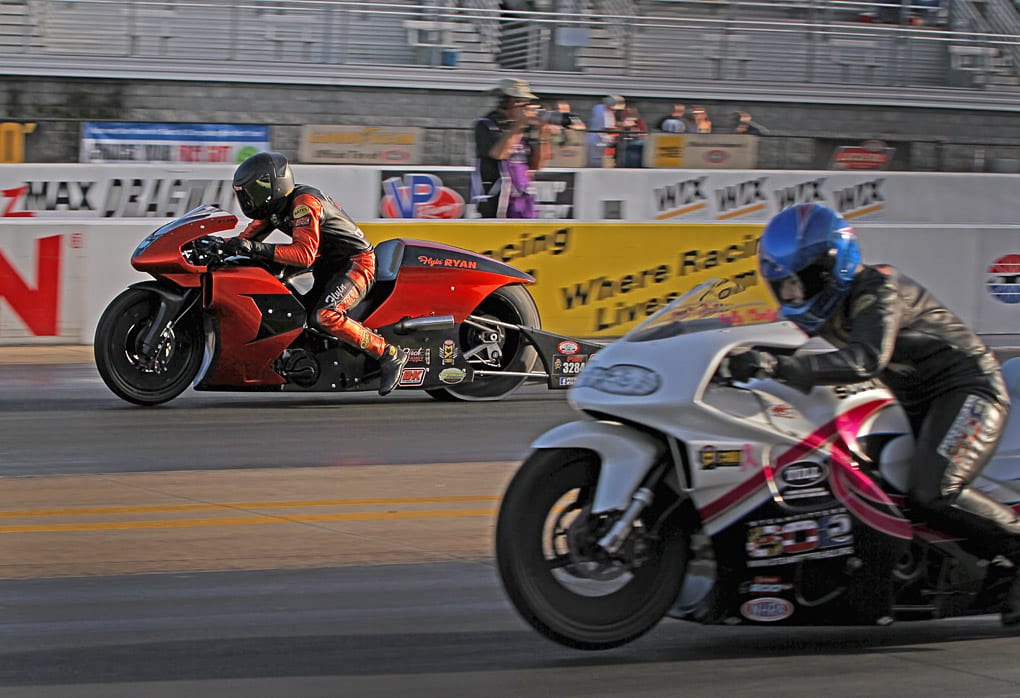 The team’s new chassis dyno is up and running, and—unlike the rest of us—the S&S powered EBR has shed 7 pounds over the winter. “That’s a chunk,” said Oehler, who’s also lost weight via the “Steve Johnson Diet”—lots of broccoli. “Steve’s been my mentor all winter. We’ve been back and forth in a lot of drawn-out conversations.” The relationship between Oehler and Johnson will continue into the season as they pit together and focus their joint attention on some common problems.

“We’re workin’ all the angles. Brad (Ryan’s dad and engine builder “Bad” Brad Oehler) has been workin’ on the engines. His primary focus—as always—is the engine development program. Our new dyno room has been his Bat Cave all winter.”

The Flyin’ Ryan team has entered into a development partnership with “A major player,” said Ryan. “I can’t really talk about it right now. The wheels have really been turning in our horsepower development program, so that’s a good thing.

”And I’ve been busy on the business end of the team, working every day and making some progress.”

To that end, Oehler has entered into a partnership with Bloomington-Normal, Illinois based web developer Cybernautic. “They’re a major company, doing work for companies as big as Kellogg’s, and it turns out they’re right here in my hometown,” said Oehler. “So they’re building a new website for me and I’m really excited to be hooked up with them.”

“Over Kill is in the process of expanding to their new state of the art facility in Kingsland, Georgia, and are especially looking forward to getting back into NHRA and view this as a perfect opportunity to develop new exposure in 2019,” said Oehler. “Mitch (Over Kill president Mitchell Clary) and his team will be attending the Gators and are really looking forward to it since they’re just up the road, so stop by our pit and say hello to the Over Kill staff.

“Both of these companies can really benefit from a presence in NHRA, so it’s really cool to break the ice with them.

Oehler has also picked up sponsorship for Gainesville from the Manufacturers Cup motorcycle drag racing series, AKA “Man Cup,” as they work to promote their April race at nearby South Georgia Motorsports Park.

So when you see the Flyin’ Ryan/B&K Cylinder Heads EBR fire up for the first time this year in the Gainesville waterbox, it will be a few pounds lighter on the scales but a few partners heavier in support. Inside that new skid-lid painted by Gun Slinger Custom Paint, Oehler knows he needs every advantage he can get to make the Championship Countdown in what is shaping up to be the most competitive season ever of NHRA PSM racing.

Fire in the hole!