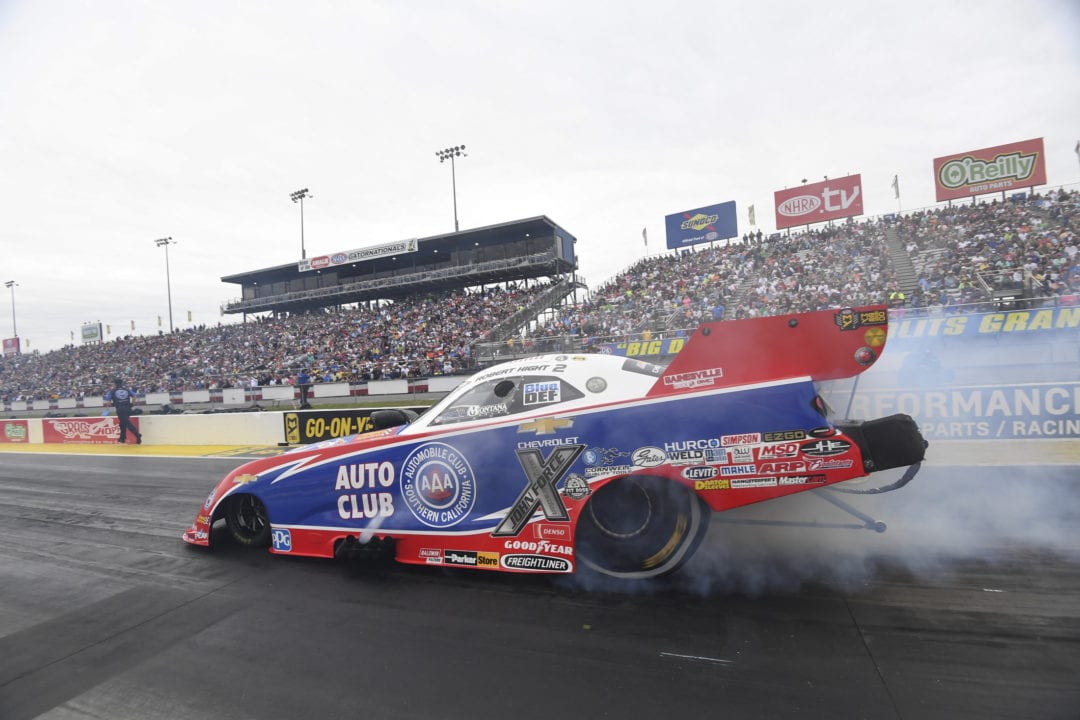 Robert Hight has enjoyed a number of hot streaks throughout his impressive NHRA Mello Yello Drag Racing Series career en route to 47 career Funny Car wins and a pair of world titles. But the incredible stretch he is on to open 2019 certainly ranks near the top, especially when it comes to starting the year.

Hight became the first driver since Kenny Bernstein in 1987 to begin the year with three straight No. 1 qualifiers, and he has followed with two victories in his 10,000-horsepower Auto Club Chevrolet Camaro SS to take a commanding points lead early in the season. Hight has clear motivation after falling just short of a third world title a year ago, and that will continue to be evident at this weekend’s 20th annual DENSO Spark Plugs NHRA Four-Wide Nationals at The Strip at Las Vegas Motor Speedway.

“There’s been some times when we’ve been on a good run and won some races and you look back and say we’ve had some breaks, but we haven’t had this year because we haven’t needed it,” Hight said. “We’ve been really steady. It goes back to last year going down to the last day of the season with a chance to win a title and not getting it. That’s motivated us to work hard and that’s shown this year. We’re on a mission.”

Steve Torrence (Top Fuel), J.R. Todd (Funny Car) and Vincent Nobile (Pro Stock) were last year’s winners of the event that will be televised on FOX Sports 1, including finals coverage starting at 5:30 p.m. (ET) on Sunday, April 7. It is the fourth of 24 races during the 2019 NHRA season and is the second year for the four-wide race in Vegas, giving fans on the West Coast an opportunity to take in the biggest spectacle in drag racing.

Hight has thrived in the unique style of the race, winning twice at the four-wide event in Charlotte, and the veteran and his team, led by star crew chief Jimmy Prock, have been locked in from the outset in 2019. Nine his 10 round wins have been with runs in the 3.80s, while his three No.1 qualifying have all been runs in the 3.80s, with one of those coming at a speed of more than 330 mph. It’s pushed Hight, who is third all-time in Funny Car wins, to new levels and he has no plans of slowing down.

“It feels like it wasn’t that long ago I was just getting in a race car,” Hight said. “To have my name mentioned with some of these guys like Kenny and Don Prudhomme, it’s pretty amazing. I have to pinch myself sometimes. But there’s still a lot more I want to accomplish. But it really isn’t just about what I’ve accomplished. You can’t do it without a good team and I have that with Jimmy and (co-crew chief) Chris (Cunningham).”

Hight, though, isn’t resting on his laurels with a marquee Funny Car field greeting him in Las Vegas. With 21 races remaining in 2019, Hight knows he’ll have to continue to work hard against the likes of defending world champion J.R. Todd, Ron Capps, John Force Racing teammate John Force, Tommy Johnson Jr., Phoenix winner Matt Hagan and Bob Tasca, but staying motivated won’t be a problem. The team had a productive off-season and has come out swinging, and Hight hopes it leads to his sixth Vegas win.

“It’s not like we’re that much ahead of everyone else,” Hight said. “Running this well, you’re going to make these other guys better, so we have to stay focused and work hard, and try to maintain what we’ve been doing. Having a four-wide race last year in Vegas was big. It gave this event a shot in the arm and we hope it continues to grow. We’ve had two weekends off and I’m ready to get back to racing.”

To purchase general-admission or reserved seats, call (800) 644-4444 or visit www.LVMS.com. Kids 12 and under are free in general admission areas with a paid adult. To honor the Salute to First Responders, military and first responders can save 20 percent on general admission tickets online at NHRA.com/GOVX or at the gate with presentation of valid military or professional ID.