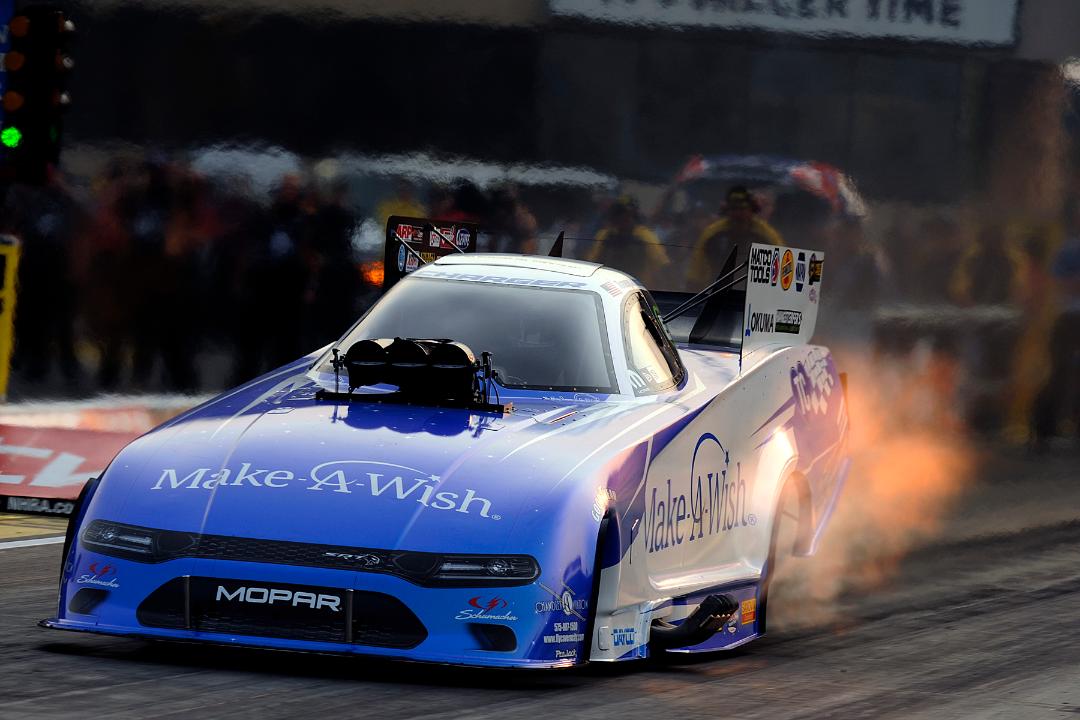 Photo by Shawn Crose
While the start of the NHRA Mello Yello Drag Racing Series’ famed Western Swing always presents one of the biggest challenges of the season, it also brings a smile to Tommy Johnson Jr.’s face. The annual trek to scenic Bandimere Speedway for the Dodge Mile-High NHRA Nationals presented by Pennzoil, which takes place July 19-21, means racing at an elevation of more than 5,800 feet, but it’s a challenge Johnson has always enjoyed.
It was the site of his first career NHRA final round and he’ll look for his first career win there as the race celebrates its 40th anniversary in 2019. It would mark a special victory for Johnson in his 11,000-horsepower Make-A-Wish Foundation Dodge Charger SRT Hellcat, but he enters the race second in points and racing well heading into a key point of the NHRA regular season.
“I’ve been going there for so long and it’s such a cool place,” Johnson said. “It’s so unique, so different and the one thing I think is really cool is to see the performance gains we’ve made there. You used to go there and everybody would slow way down and blow up a bunch of parts and not run really well, and now you go there and we don’t run much slower. That’s been amazing to see. Everybody knows how hard it is to race up there, so I think the fans appreciate the strides everyone has made there. It’s cool we’re going out there and running so well.”

Leah Pritchett (Top Fuel), John Force (Funny Car), Greg Anderson (Pro Stock) and Hector Arana Jr. (Pro Stock Motorcycle) were last year’s winners of the event that will be televised on FOX Sports 1 and FOX, including live final eliminations on FOX at 3 p.m. (ET) on Sunday, July 21. It is the 14th of 24 events in the 2019 NHRA season and is the traditional starting point of the challenging and iconic three-race Western Swing, which includes stops in Sonoma and Seattle.
Johnson will look to keep his strong season going in Denver, as the team, led by crew chief John Collins, has performed at a high level all year. He has two finals appearances, racing to the win in Chicago, and advanced to five semifinals, thriving on consistency and small adjustments throughout the year. With championship aspirations, Johnson simply hopes to see his team maintain this impressive pace during the second half of the year.
“Normally the start of the Western Swing is where we start to hit our stride,” said Johnson, who has 18 career victories. “To already be in our stride, your focus turns to making sure we can keep this going. The way the team has performed, if we can carry that momentum and put together the back half with this year’s front half, we’ll be in good shape the rest of the year.”
He’ll have to get past the likes of points leader Robert Hight, Don Schumacher Racing teammates Matt Hagan, who won Sunday in Epping, Ron Capps and Jack Beckman, and defending world champ J.R. Todd to win in Denver, but Johnson always heads to the area with plenty of energy. It’s a thrilling weekend that starts with the Mopar Big Block Party on Thursday, July 18, and also includes nitro night sessions under the lights on both Friday and Saturday.
“There’s added responsibility, but I don’t feel any extra pressure,” Johnson said. “There’s pressure just from overcoming the mountain. The block party is one of the coolest things. It is phenomenal the turnout of the block party. There’s just so many people there and that really just gets you excited for the weekend. It’s one of the neat things to be involved in as part of the Mopar program.”