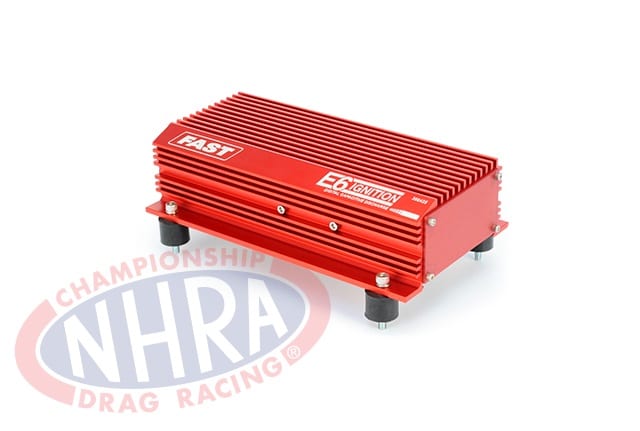 Thanks to approval from the NHRA technical department, the FAST E6 Digital CD Ignition Box is now available for use in NHRA Championship Drag Racing.

The new FAST E6 Digital CD Ignition Box (part no. 306425) has been added to NHRA’s Accepted Product List per Glen Gray, NHRA Vice President of Technical Operations. It is legal in any sportsman class that does mandate the use of a specific box. This approval further entrenches FAST as a major player in the ignition market since the brand’s entrance into the arena over the past year. The E6 Digital CD Ignition Box features multiple-spark functionality, meaning the engine will fire multiple sparks per cylinder while the engine is below 3000 RPM. The multiple-spark feature provides a more complete burning of the fuel in the combustion chamber, resulting in a smoother running engine and better fuel economy. The box is EFI-friendly and is specifically designed to work with the revolutionary  FAST EFI systems including XFI, XFI Sportsman, EZ-EFI Fuel and EZ-EFI 2.0 Fuel + Ignition – all of which are commonly found in sportsman drag racing classes. However, the box is also fully compatible with carbureted applications.