“We know how delicious and unique the food options are during the State Fair of Texas and we wanted to give fans the chance to get their fill of those tasty treats,” said Ed Lugo, Texas Motorplex Food Services Manager. “We will have a wide variety of State Fair favorites as well as some options you can only get at the FallNationals. You can’t beat the racing action and we know our fans will enjoy all our food offerings.”

Texas Motorplex will be hosting Friday Night Live on October 16 to get the race weekend started. Fans will be treated to grudge racing, dragsters, Top Fuel Harleys, Jet Dragsters, Pro Mods and a high flying Freestyle Motocross exhibition during the nearly three hour event. On Saturday and Sunday top NHRA professional teams will be racing for the Camping World NHRA World Championship. Two rounds of qualifying on Saturday will set the field of sixteen for Top Fuel dragsters, Nitro Funny Cars, Pro Stock and Pro Stock Motorcycle categories. Sunday eliminations will be televised on nationally on FS1 as the AAA Texas NHRA FallNationals will feature 330 mph race cars and competitors from across the country. 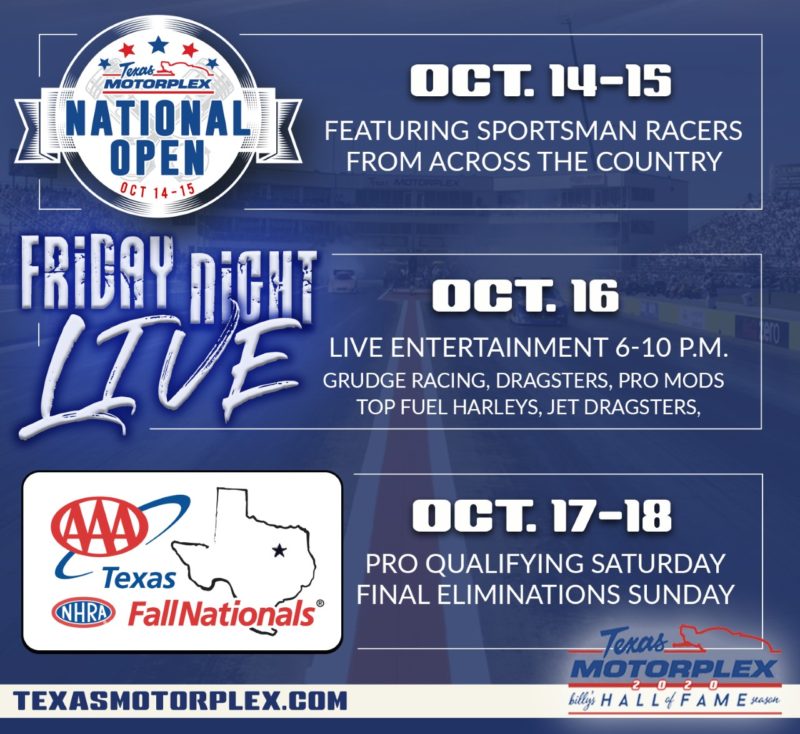