The 2014 NHRA Mello Yello Drag Racing Series season is nearly at hand and ESPN and ESPN2  are set to bring the sights and sounds to fans across the country for the coming season. NHRA and ESPN have announced airdates and times for the first three events including the season opening event, the Circle K NHRA Winternationals at Auto Club Raceway at Pomona, Feb. 6-9. ESPN will air the conclusion of the event in a three-hour broadcast, Feb. 9 from 8 – 11 p.m. EST.

Each telecast with offer insight into the racers of the NHRA Mello Yello Drag Racing Series and bring the viewers behind the scenes footage from the races. Head-to-head matchups, technical segments and in-depth statistics will dominate event coverage. ESPN and NHRA also will continue to make  use of social media platforms during the telecasts. 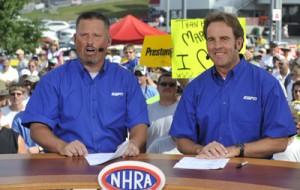 Dave Reiff and Mike Dunn return to the broadcast booth and will once again bring the sights, sounds and stories to viewers during the course of a race weekend. Reiff, a part of the ESPN coverage since 2001, begins his second season as telecast anchor. Dunn offers his unique insight as a former NHRA Top Fuel pilot and now with 13 years as a color analyst for the NHRA Mello Yello Drag Racing Series.

In all, ESPN will dedicate more than 115 hours of original programming to the 2014 NHRA Mello Yello Drag Racing Series, the world’s quickest, fastest, and most intense motorsport, on a same-day basis.

All telecasts will be aired in high definition on ESPN or ESPN2 and  are available in nearly 100 million households nationwide. The telecasts will feature competition from all four classes in the NHRA Mello Yello Drag Racing Series: Top Fuel, Funny Car, Pro Stock, and Pro Stock Motorcycle.

All NHRA programming on ESPN Networks is also available on computers, smartphones, tablets, Xbox 360, Xbox One, Apple TV and Roku via WatchESPN, accessible to fans who receive their video subscription from an affiliate provider.

The NHRA will be available in 78 countries and territories to more than 30 million homes, through a combination of ESPN International sales and network programming, including coverage in Australia, Brazil, Canada, the Caribbean, Latin America, UK, Eastern Europe, Russia and New Zealand. In addition, U.S. troops and their families serving around the world in 175 countries and on Navy vessels at sea can watch NHRA on the American Forces Network.