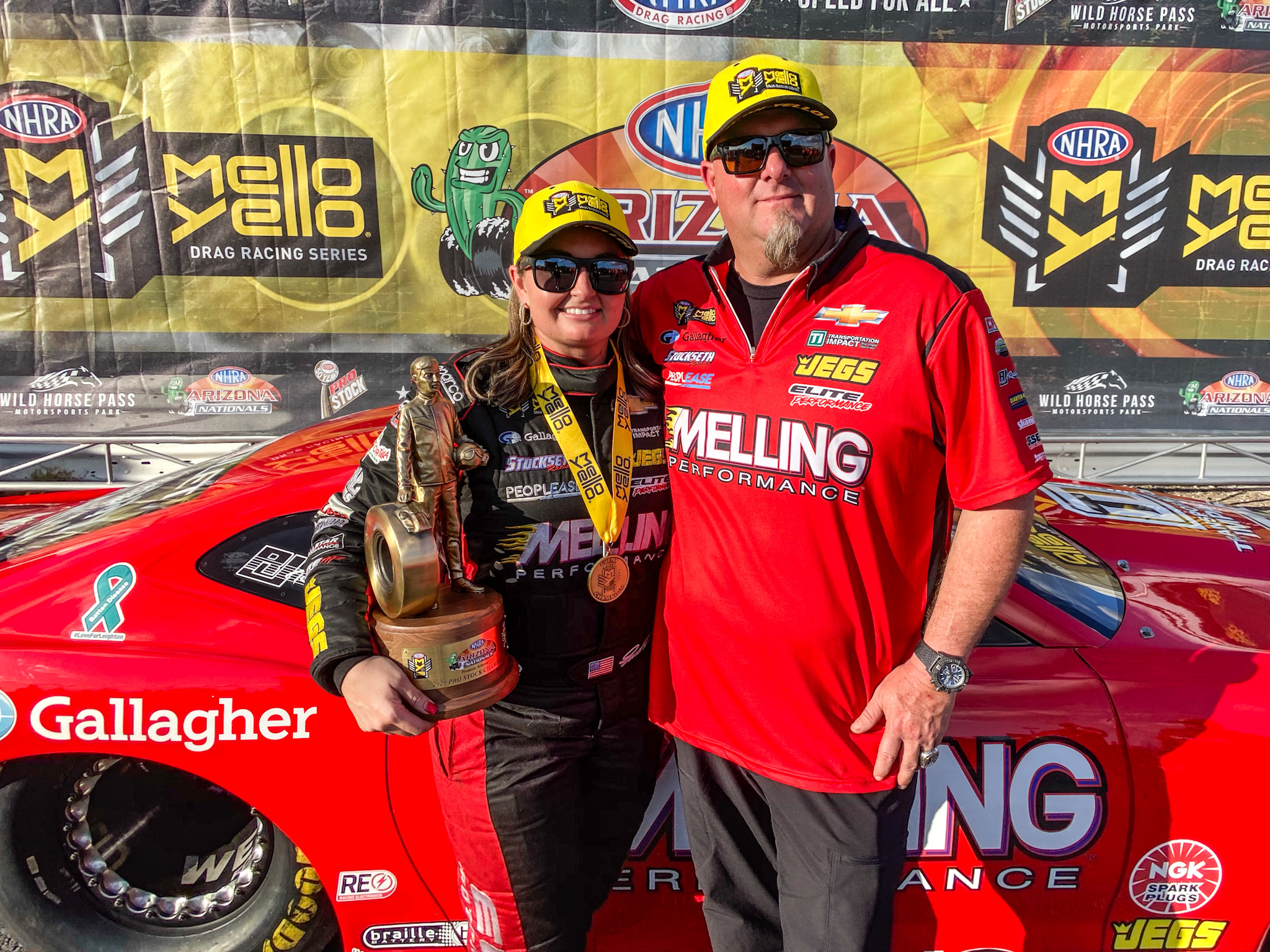 It didn’t take long for the defending Pro Stock world champion to reach the winner’s circle in 2020.

Erica Enders rolled to the win on Sunday in Phoenix in her Melling Performance Chevrolet Camaro, putting together four dominant performances in eliminations at the NHRA Arizona Nationals, notching her first victory of the year with a run of 6.531-seconds at 210.44 mph in the final round against Bo Butner.

“It was Richard’s birthday and we were able to get it done,” Enders said. “He said this morning at breakfast, ‘Hey, you don’t have to buy me a present, just get me a Wally today,’ and we really wanted to get him one. For the entire operation, I’m just excited. I’m thrilled with the group we have and I’m proud of my guys. It’s really awesome.”

With the win at the second of 18 races in 2020, Enders continued her impressive momentum from the end of 2019, which culminated in her third world championship.

By picking up her 26th career win in her 52nd final round, Enders also earned her first regular-season win since 2018, putting her on a strong path to open Pro Stock’s 50th anniversary season.

This one was spectacular from start to finish, which started with Enders qualifying second with a 6.554 at 208.33.

Led by crew chiefs Mark Ingersoll and Rick Jones, Enders stepped it up in eliminations, running 6.532 at 210.37 in an opening-round win. A round later, Enders made the quickest run of the weekend in Pro Stock with a stout 6.526 at 211.00 against Chris McGaha. That sent her into the semifinals, where she dispatched Jason Line, tracking him down at the finish line. Enders went 6.555 at 210.28 to nip Line by less than a foot, moving to a final round where she led from start to finish and pulled away at the end.

“Today was excellent. Coming off of Jeg’s dominating performance in Pomona, we knew we just had to get my car happy,” Enders said. “Our objective was to get my car as happy as possible. We were definitely optimistic and my guys gave me a tremendous race car today. It was very consistent, very fast and we just crushed the competition today.”

The victory, which is her second at Wild Horse Pass Motorsports Park, also moved Enders into the points lead over teammate Jeg Coughlin Jr., who won the opening race in Pomona. As far as what the early success means, Enders knows it can only be a positive.

“I definitely think it can help,” Enders said. “We struggled and battled through the early part of the year (last season). Our goal coming out this year is to not take any round for granted. We finished 1-2 with Jeg last year and that’s our goal again this year. We’re back to our championship form, back to that dominating horsepower and I’m thrilled. You try to ride that wave for as long as you can.”