She will drive the team’s new Camaro, which will be tuned by the father/son duo of Rick and Rickie Jones, with in-house horsepower crafted by Nick Ferri and Jake Hairston.

“I’m really excited to start this next chapter of my career,” Enders-Stevens said. “It’s hard to believe that 2014 will be my 10th year in Pro Stock but it’s true. We want to make it our best year yet, and we’re all going to be working very hard towards that goal.

“The last three years we’ve been in contention for the championship very late in the season, and we expect to be there again with Elite Motorsports. Rickie just won the NHRA Finals, so it’s obvious they have all the pieces in place to be successful. 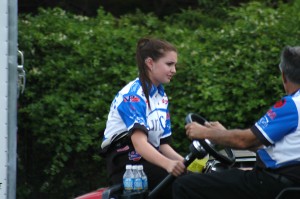 “I’m sad to leave Victor Cagnazzi. We have worked together for the majority of my Pro Stock career, and I will always be appreciative of Victor and his wife Brita. I certainly value our relationship.

“The deal Richard (Freeman, team owner of Elite Motorsports) offered assures me a full-time ride in his top car, so at this point in my career I thought it was the best move for me to make.”

Enders-Stevens has fought hard to earn her place in the drag racing world during her nine seasons in the factory hot rod class. Despite running partial schedules at times, she has successfully qualified for 102 national events, won six Wallys in 17 final-round appearances, and been the No. 1 qualifier on six occasions. All of those marks represent records for female competitors in the category.

Following a successful Jr. Dragster and Sportsman career, Enders-Stevens made an immediate impact in the Pro ranks due in large part to her immense popularity, which was a result of the Disney Channel movie Right on Track, chronicling her and her sister Courtney’s time racing in Jr. Dragster. For the first time ever, young girls were dragging their fathers into the Pro Stock pits to meet their on-screen hero in person.

And Enders-Stevens didn’t disappoint on the track, racing to the final round in Chicago during her rookie campaign with Victor Cagnazzi Racing. She later collaborated with her father Gregg Enders, purchasing a turnkey race operation from Don Schumacher Racing before moving to Jim Cunningham Motorsports, where she attempted to resurrect the Ford brand in Pro Stock. She returned to Cagnazzi in 2011.

Her next three seasons were filled with career highlights, including her first victory, her first foray into the playoffs, and her first top-10 ranking. She has now finished in the top 10 in three consecutive seasons with a best of fourth place in 2012.

“I’ve been so blessed to have had the opportunities I’ve had so far,” said Enders-Stevens, who finished sixth in 2013. “For many years I got to race with my dad, which was something we always dreamed about when I was younger and something I’d love to do again some day.

“I’ve also raced on my own and, although it hasn’t always been easy, I love this sport so much that I’ve fought to stay out here. The support I’ve received from my dad and the rest of my family, my longtime friends, and all of the wonderful fans out there have made it all worthwhile.

“This new start with Richard and Elite Motorsports is exciting for me. I hope I can repay their faith in me by being competitive and chasing after another championship.”

The team plans to test extensively in Florida prior to the season-opening NHRA Winternationals, Feb. 6-9, at Auto Club Raceway in Pomona, Calif.