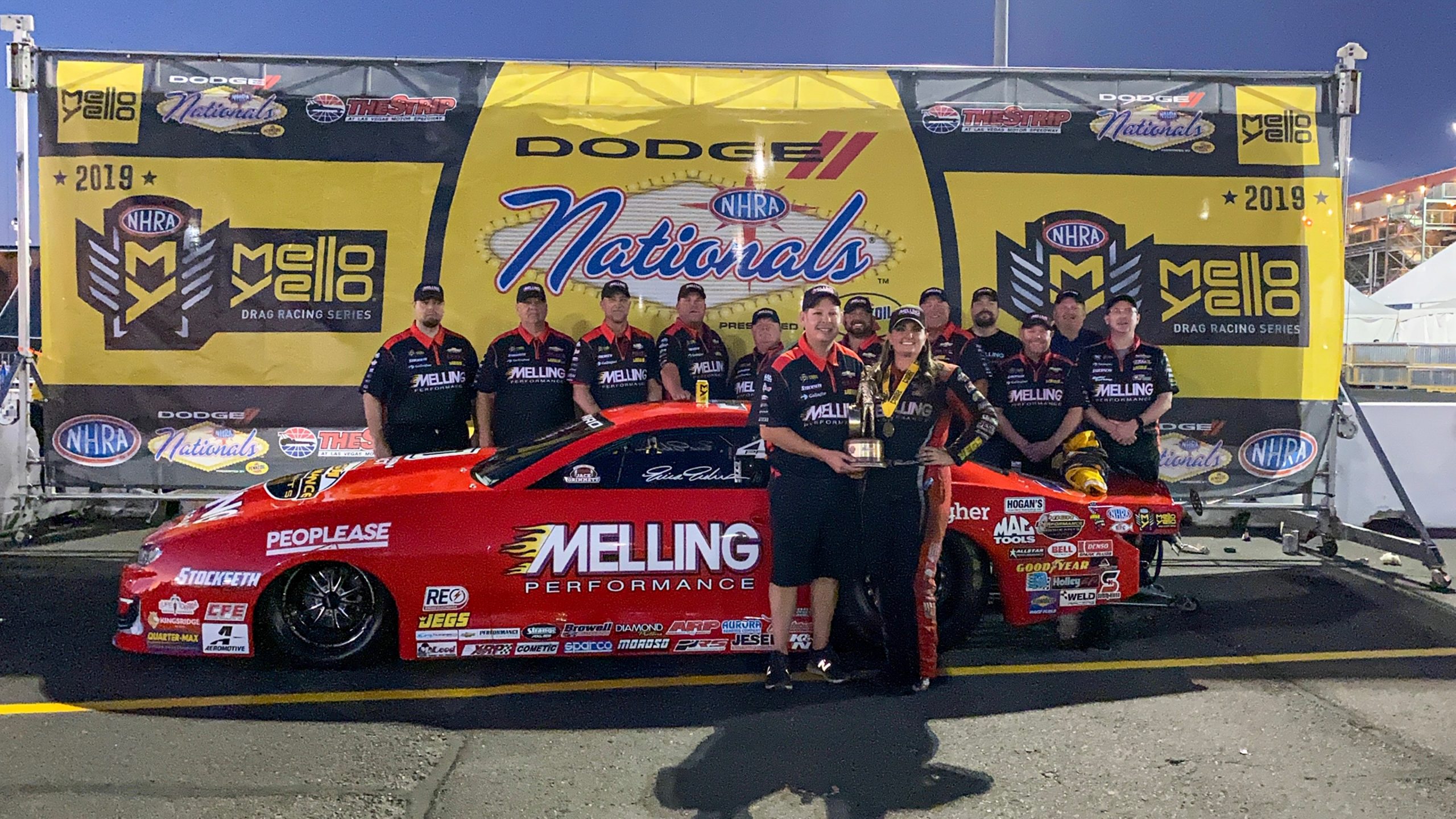 Las Vegas continues to be very good to Erica Enders and now she’s on the verge of a third Pro Stock world championship.

Enders came up aces on every front on Sunday at The Strip at Las Vegas Motor Speedway, beating Elite Motorsports teammate Jeg Coughlin Jr. in the final round of the Dodge NHRA Nationals with a run of 6.617-seconds at 208.04 mph in her Melling Performance/Elite Motorsports Chevrolet Camaro.

This one was steeped in significance, too.

Not only was it Enders’ 25th career win – and her second in 2019 – it marked the 150th overall victory for females in NHRA Mello Yello Drag Racing Series racing and the 200th win for the Chevy Camaro.

Perhaps most importantly, the win at the fifth of six races in the Mello Yello Countdown to the Championship gave the surging Enders a 92-point lead over Coughlin with one race remaining, putting the standout on the precipice of a third world title – all in a day’s work.

“It’s been a great day and to get the 150th, I’m just really proud to be part of the group of such smart, strong, talented females out there,” said Enders, who now has five Vegas wins. “It was huge to win today and we were able to rise to the occasion. We go up every single run and give it everything we’ve got. My guys do the best we can, I do the best I can and it turned out great today.” 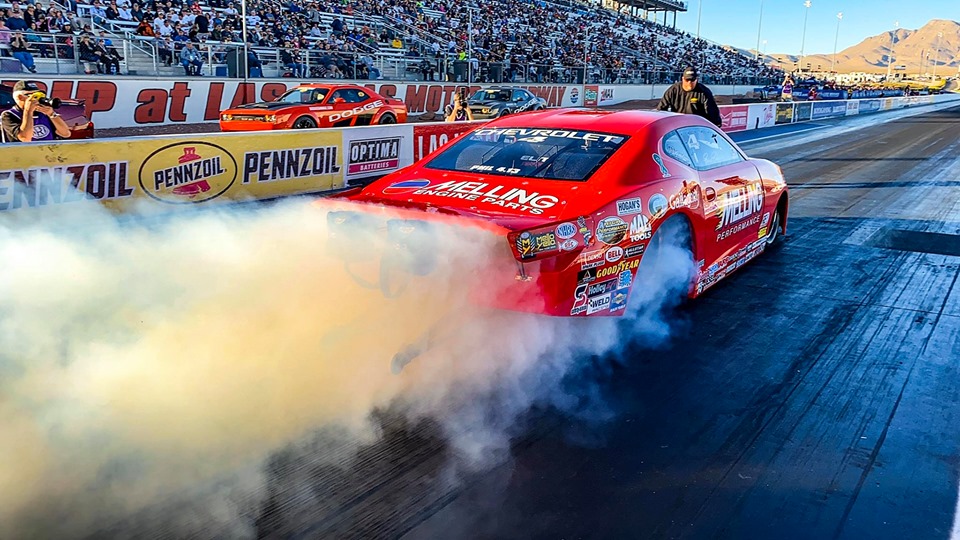 Enders has repeatedly mentioned that this year’s playoff run has felt a lot like her title years in 2014 and 2015, and Sunday might have been the biggest and most perfect example. She closed out both of those championship seasons with playoff victories in Vegas, something she eyed heading into the weekend, and Enders was true to championship form on Sunday.

After qualifying second with a 6.587 at 208.46, Enders was on point during eliminations, taking out Steve Graham and teammate Alex Laughlin to open the day. She followed with a big victory against 2017 world champ Bo Butner in the semifinals, going 6.638 at 207.46.

Enders also had a stout .026 reaction time and that was again a factor in the final round. She led from start-to-finish on Coughlin thanks to a reaction time of .018, never trailing in the high-stakes final round.

“My guys just keep giving me a really good racecar,” Enders said. “I love The Strip at Las Vegas Motor Speedway. It’s been really good to me and I hope it keeps on coming. Jeg is a legend for a reason and, in my opinion, the best driver I’ve ever seen. I’m humbled to be his teammate and drive alongside him. It was definitely taxing (today) and to have an all-Elite final, that was just the icing on the cake.”

The long-awaited third world title is now within reach for Enders, who will look to put the finishing bow on it in two weeks at the Auto Club NHRA Finals at Auto Club Raceway at Pomona.

It is the final race of the 2019 NHRA season and Enders hopes to go out in impressive fashion with a third world championship. But with the NHRA Finals including the points-and-a-half format, Enders and her team, led by crew chiefs Rick Jones and Mark Ingersoll, are locked in. The team has worked through plenty of peaks and valleys in 2019 and now riding high, Enders has no plans of letting up.

“Momentum is huge in this sport,” Enders said. “At the beginning of the year, we had some pretty deep valleys and we had to claw our way out of them. (Team owner) Richard Freeman has put us in position to do the best we can. Peaking at the right time is crucial. We’re going to go out to Pomona to win the race. We’re going to dig deep and I’m excited about the opportunity.” 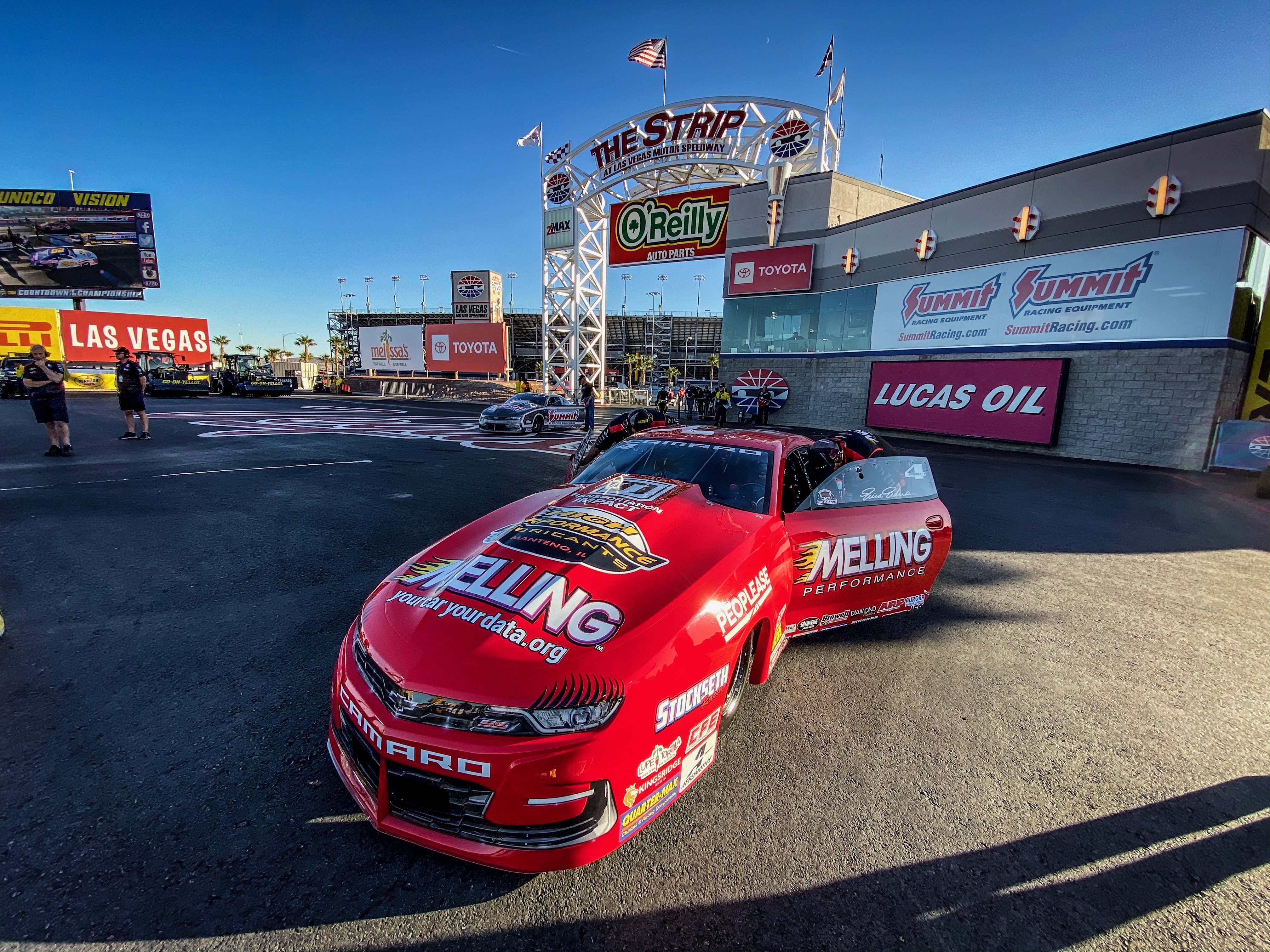