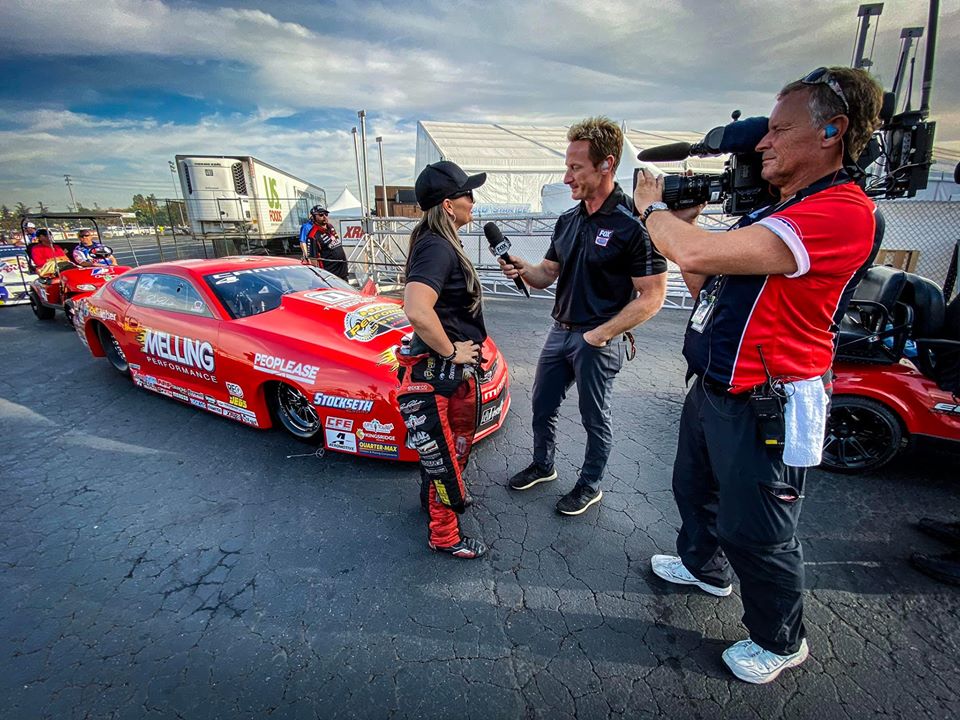 If the actual race is anything like the buildup, then we’re set for something incredible when Erica Enders and Greg Anderson meet in the first round of eliminations on Sunday at the NHRA Finals at Pomona.

Of course, how they got to this point was anything but conventional.

Enders, the current Pro Stock points leader, was impressive again, qualifying second at the final Countdown to the Championship race with a 6.538 at 210.93 mph in her Melling Performance/Elite Motorsports Camaro.

Anderson, meanwhile, clicked it off early on every pass, intentionally trying to set up a first-round matchup to help KB Racing teammates Jason Line and Bo Butner. As fate would have it, Anderson got his wish, qualifying 15th in his Summit Racing Equipment Camaro to set up an epic first-round matchup with Enders.

Asked on the top end what she expects to have for Anderson, Enders didn’t hold back, drawing cheers from the crowd at Auto Club Raceway at Pomona.

“What I have for them is the best team drag racing has ever seen and that’s exactly the men that stand behind me at Elite Motorsports,” Enders said. “That guy (Anderson) has hated losing to a girl from the day I set foot on the scene and I plan to keep it that way.”

As the layers are peeled back, this one has the makings of something special and could have people talking for years.

Anderson deliberately held back to force the match-up and help his teammates, while Enders now has an opportunity for a career-defining moment with a third world title on the line.

Knock out Anderson en route to another championship and it’s a story for the ages that pads an already impressive legacy for Enders.

Anderson, a four-time world champ who was knocked out of championship contention in qualifying, is determined to make Enders earn it, even if the methods drew a variety of responses and raised a few eyebrows from those on the grounds in Pomona, those watching online and television, and on social media.

“(Elite Motorsports) may not be happy about what’s going on, but it’s good for the class. She’s just going to have to go out and earn it tomorrow,” Anderson told Fox Sports 1 reporter Amanda Busick on the top end. “There’s nothing wrong with that. You want to be the champion, you should have to go earn it.”

Of course, Busick got Enders’ rebuttal, and she didn’t hold back this time, either, implying this scenario may not turn out like Anderson envisions if Enders and her team have their way.

“I say that sucks to be him, probably,” Enders said. “We just do our thing. We don’t play into the drama. It’s about me, my Melling Performance car and our lane. We came here for one duty and we plan to accomplish that.”

If Enders beats Anderson – and she’s been impressive throughout the playoffs – then only teammate and No. 1 qualifier Jeg Coughlin can catch her. He would need a second-round loss from Enders as well as an event win to do it, while Anderson’s tactic keeps teammates Jason Line and Bo Butner in the championship conversation – for now.

If Anderson beats Enders, Line or Butner need to win the race, while their chances go kaput if Enders wins the opening round matchup.

Which, again, makes things mighty interesting for round one.

Elite Motorsports owner Richard Freeman welcomed the bulls-eye and the approach from Anderson, fully confident in the job Enders and his team has done throughout the postseason.

“We’re all good with that,” Freeman said. “Come on and get you some.”

Which, of course, ups the ante even more. The buzz surrounding this one-for-the-ages matchup was palpable on Saturday, which means it will be at a fever pitch when noon Pacific time rolls around on Sunday.

But Coughlin, who still has a championship dog still in this fight, remained fervently in Enders’ corner – even if it may cost him a title.

“Greg’s a good racer, but I know where my money’s at,” Coughlin said.

And with that, we’ve got something special brewing for Sunday.