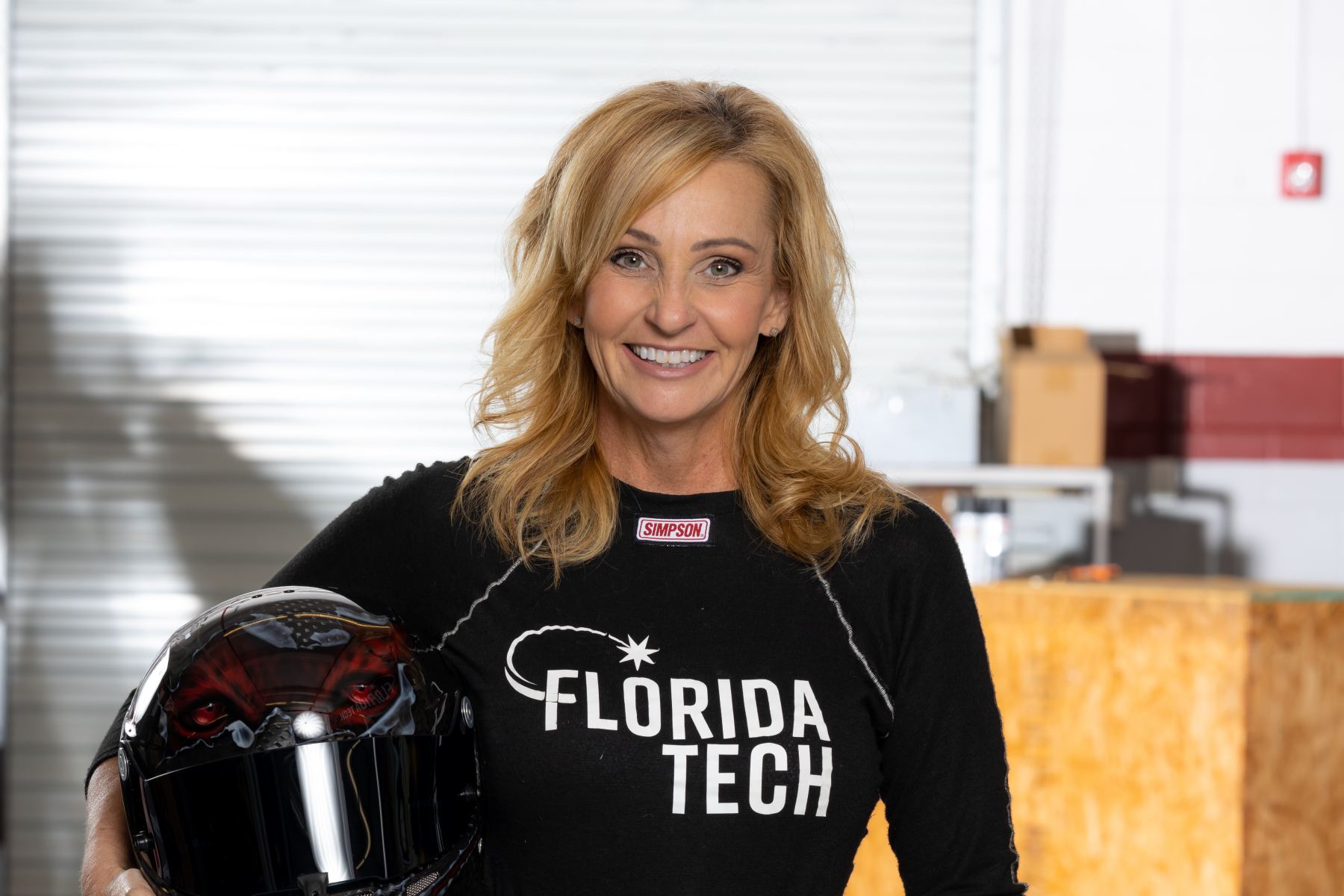 Two-time world championship jet car driver Elaine Larsen will celebrate her 20th year at the wheel of a jet-powered race car in 2022 with a “Two Decades of Thrills: Full Throttle Tour” that will propel her into the next phase of her professional career.

With the conclusion of the 2022 tour, Larsen will step down as the primary driver for Larsen Motorsports (LMS). Instead, she will assume a more prominent leadership role within LMS, the company she founded with her husband, Chris, and Blazing Trails, the 501(C)3 non-profit she founded to connect students to exciting, non-traditional careers through STEAM (Science, Technology, Engineering, Arts, and Mathematics).

Having trained a host of young jet dragster drivers at LMS, Larsen recognizes the importance of supplying the next generation with both the proper tools and opportunities to succeed. As a result, beyond the 2022 tour, she will focus more of her energy on driver development while expanding her leadership, mentorship and business roles.

Nevertheless, she will not be hanging up her helmet for good. Instead, she will assume new duties as the sole testing driver for Larsen Motorsports’ newest Generation 6 jet dragsters currently in development while at the same time reserving the right to climb back into the cockpit of one of the LMS jets for special appearances and events.

“I have been proud to represent the Florida Tech Panthers at venues across the United States,” Larsen said, “and I can’t think of anyone with whom I’d rather be affiliated for this tour.”

In advance of the tour, the Florida Tech dragster will get a new paint scheme thanks to Sherwin-Williams®, a Larsen Motorsports sponsor who connected the team with Jenn Mayberry, a custom painter [Fav Airbrush Girl] in Atlantic City, NJ. Mayberry will create not only the new graphics on the jet dragster but will also airbrush them on the car using House of Kolor® exclusively. Mayberry also refinished Elaine’s Simpson Racing Products Stilo driving helmet to match the jet car, using House of Kolor paint and products. Mayberry’s creation is known as Pele. This 3D digital panther represents the Goddess of Volcanoes and Fire.

The tour will begin in January 2022 and will consist of a minimum of 10 races and additional appearances. The Full Throttle Tour will take Larsen to new tracks and events as well as back to some old favorites. For the full schedule, go to LMSJETS.com.

Larsen states that this year of jet racing will be her “Bucket List Year,” which corresponds with her current partnership with the Alliance For Lifetime Income, that is heading a campaign that encourages adults to create a “Retirement Bucket List.” The bucket list campaign helps to show adults that retirement is just a new chapter of life that can be both adventure filled and relaxing. Larsen has been sharing some of her favorite bucket list items. Leep checking back for what’s next.

Larsen would like to thank all of her sponsors throughout the years who have seen the worth of a passionate jet car driver and her team.

“This is a game that takes many players, and all of those players are valuable to me,” Larsen said.

The “Jet Family” as Larsen fondly refers to her team members have also been of utmost importance throughout the past two decades, and she acknowledges that each and every member of the jet family has touched her heart. The continued support of her husband, Chris, son Andrew, and jet-loving pug, Nitro, has allowed her to live her very best life.

During the tour, Larsen will auction some of the items representative of her two decades in jet car racing, including crew shirts and actual hardware from LMS jet cars. Auction details will be forthcoming on LMS social media platforms.

As the tour progresses, Larsen will be working with sponsors and other close confidants to select her replacement as the team’s primary driver. If you think you have what it takes to be the next Jet Dragster driver, just access the “Contact Us” page at www.LMSJETS.com and make your case.

Larsen has worked hard throughout her career to break through the glass ceiling so many women face in the motorsports industry. Elaine and her husband, Chris Larsen, founded LMS over two decades ago as a high-performance vehicle research and development company specializing in Jet Dragsters. While they have always dreamt big, neither of them could have imagined the jet racing empire they now manage. LMS is one of the largest turbine- powered motorsports drag racing companies in the world, and has provided hundreds of internships for the new generation eager to gain experience.

As a prominent public figure, Larsen has worked with countless organizations as a motivational speaker, mentor and spokesperson. She has demonstrated a knack for connecting with people on a personal level and commanding their attention, which is why she remains as active off the track as she is on it.

Nevertheless, while Larsen loves her work with LMS and Public Speaking, her heart belongs to the New Generation of young professionals with whom she works through Blazing Trails, a 501(C)3 non-profit she founded in 2018. Through STEAM (Science, Technology, Engineering, Arts, and Mathematics) education, Blazing Trails shows students of all ages that there are many different career paths, traditional and non-traditional, from which they can choose. With free lesson plans, field trips, and virtual events, Blazing Trails is for all ages, demographics, and interests. 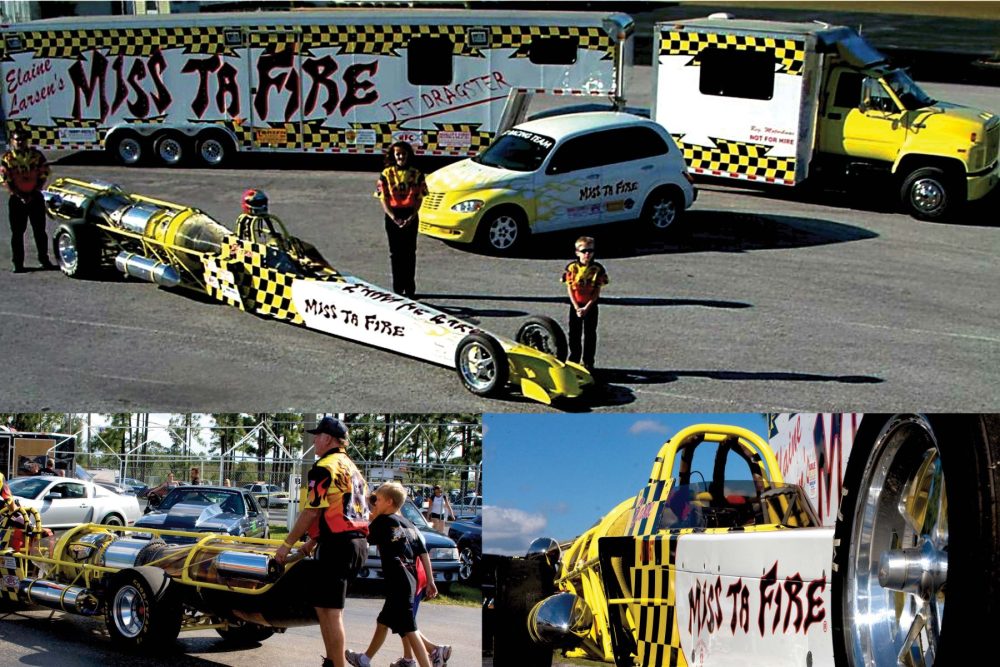 The 2022 season marks two decades of jet cars for Larsen. Larsen knew jets would be her passion and her life the first time she accelerated down a racetrack at more than 250 miles an hour. In an industry known for being dangerous, thrilling and sometimes downright intimidating, Larsen has succeeded beyond her wildest expectations.

“The highs have been so high, and the lows, well, those have been nearly unbearable,” she said in reflecting on a 20-year competitive career. Larsen recognizes that the lifestyle she fondly refers to as her “Jet Life” is filled with hard-work and sacrifice from everyone involved, but the passion that drives her and her team, also is unmatched.

Over her career, Larsen has driven nine different jet dragsters. Winning hasn’t always come easy. In fact, Larsen has been involved in a handful of wrecks over the past two decades, one of which nearly took her out of the driver’s seat altogether.

Nevertheless, no matter what has been thrown her way, Larsen has powered through with a fierce passion that she will apply to the next chapter and the chapter thereafter.