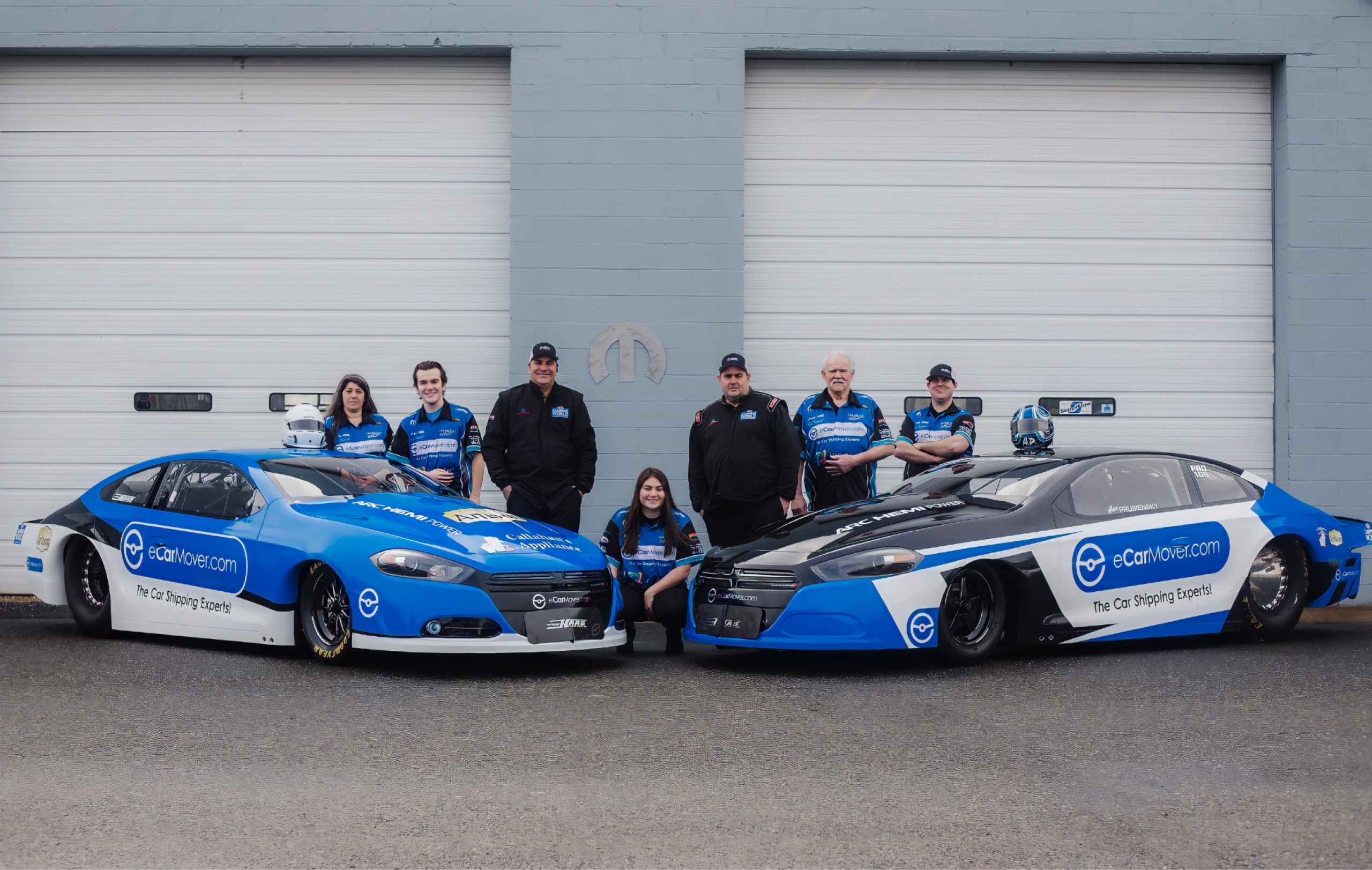 Last weekend the two car eCarMover Pro Stock team of veteran Alan Prusiensky and rookie Mike Callahan opened their 2021 racing season competing at the 2nd annual World Doorslammer Nationals in Orlando. For Prusiensky it was the chance to shake off the off-season rust and for Callahan it was his first opportunity to feel the power of his eCarMover and Artisan Coffee Dodge Dart for the first time.

This weekend at the 52nd annual NHRA Gatornationals both drivers will be looking to start the NHRA season on the right foot and represent their Florida-based sponsor eCarMover on the national FOX broadcast.

“I am excited to see what Alan and Mike can do at the NHRA Gatornationals,” said eCarMover Co-Founder John Mingolelli. “Alan is building a great program and we are excited to have Mike in the second Dodge Dart. This sport is about chasing your dream so to see him out here competing against the best of the best just makes me very proud. eCarMover is excited to be a part of the NHRA and Camping World Drag Racing Series. We have some major marketing goals and are looking forward to leveraging our national and international relationships with other NHRA sponsors.”

Last season Alan Prusiensky worked diligently to compete every weekend in one of the toughest classes on the NHRA Camping World Drag Racing Series. His Dodge Dart showed flashes of consistency and power but the chaotic nature of the season would not allow him to develop consistency. After an off-season spent in the shop he is ready to continue to represent Dodge and eCarMover alongside rookie Mike Callahan.

“Last season was tough for our team,” said Prusiensky. “We were fixing one issue and finding another problem. These race cars take a lot of patience and you just have to work so hard. I am grateful for the support of my family and also sponsors like eCarMover. I have known John for a while and I appreciate his support. We are going to go out to every race and give it 100 percent I can promise you that.”

While Prusiensky is continuing to develop a powerful engine program he is also providing instruction and encouragement for Callahan. The Frisco, Texas resident is making his professional NHRA Pro Stock debut at the Gatornationals one week after earning his license. The businessman and car enthusiast is living a dream competing in the Pro Stock category.

“Alan is great,” said Callahan. “He has more patience that I have. He is a good teacher and he keeps me on track. When I have doubts about myself he lets me know it is not a big deal and it is not that hard. I am really excited. This is the biggest event I have ever been to. It humbles you with the amount of work we put into these race cars to get them to go down the track.”

“I wish I would have had more seat time at the World Doorslammer Nationals,” said Callahan. “We broke things so we spent precious time we could have been running making repairs and swapping motors. This weekend will be really amazing. We are looking forward to running the qualifying sessions and I will get more seat time. Am I confident I will qualify? I don’t know, we will see. I am going to go out there and do the best that I can. This is a big event and there are a lot of people that have a lot more experience in the car than me. It is an amazing thing to try and do. This is a dream come true and it is just great to be here.”

Qualifying for the 52nd annual NHRA Gatornationals will begin Friday, March 12 and continue into Saturday, March 13. FS1 will televise two hours of qualifying coverage at 3:00 p.m. (ET) on Saturday.  Final eliminations will start on Sunday, March 14 at 10 a.m. (ET) with the race broadcast beginning at 11 a.m. on FS1 and FOX.