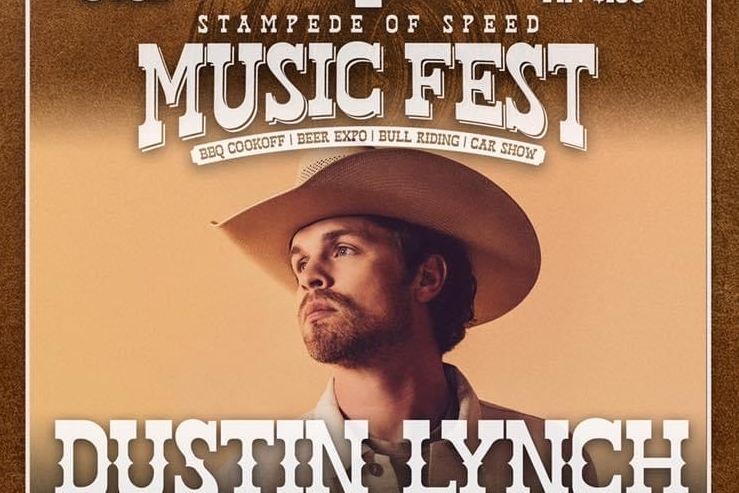 The inaugural Stampede of Speed at the Texas Motorplex (7500 Hwy 287, Ennis, Texas 75119) will kick into high gear on Sunday, October 3, with a country music festival headlined by Dustin Lynch along with Flatland Calvary, Wade Bowen and Kyle Park. General admission tickets for the show will be $25 with children 12 and under free with a paid adult. Additional VIP tickets will be available for $100 and will include access to the Stampede of Speed VIP Corral featuring cash bar, private restrooms, an elevated viewing area and VIP parking. Gates will open for the festival at 12 p.m. and fans will also be treated to a Beer Expo and BBQ contest throughout the afternoon.

“We are excited to be starting a week of amazing events with our first Country Music Fest,” said Christie Meyer Johnson, Texas Motorplex Co-Owner. “The Stampede of Speed will be nine days of family-friendly entertainment including music, racing, movies, fireworks, autograph events and most of all, a traditional Texas vibe every day. We know Dustin Lynch, Flatland Calvary, Wade Bowen  and Kyle Park will put on a great show for country music fans.”

Throughout the day Texas Motorplex will be hosting a Beer Expo with sampling from Dallas/Ft. Worth area craft breweries, a car show featuring a 1,000 hot rods and classic cars, BBQ cook-off and United Pro Rodeo bull riding event. Additionally, there will be a Kids Korral with games and climbing wall.

BBQ and music will be the theme of the day as some of the best grill masters show off their tasty delicacies paired with some refreshing cold beer from Metroplex area breweries. Multiple musical acts from Nashville to Texas will entertain the crowd from the afternoon into the evening leading to the first of many fireworks displays to celebrate the inaugural Stampede of Speed.

Monday, October 4 – The Stampede of Speed Nitro Side Show and Scott Sturgeon Concert

This ticketed event will feature some of the wildest race cars on the planet as they try and set speed records and breathe fire as they roar down the track. The pits will be open for fans to get up close and personal with some of the most exotic race cars on the planet. Following the racing action Scott Sturgeon will perform before massive fireworks display caps off an eye-opening, pulse pounding evening of racing and music.

Racing action will be the theme of the day as competitors from across the region race in the Stampede of Speed Shootout featuring Top Sportsman, Top Dragster and Pro Mods. The Top 16 sportsman and Top Dragsters will battle it out with a winner take all Shootout to end the day. Pro Mods from every association including NHRA will battle it out in a first-ever, no rules, anything goes battle to be the quickest at the Stampede.