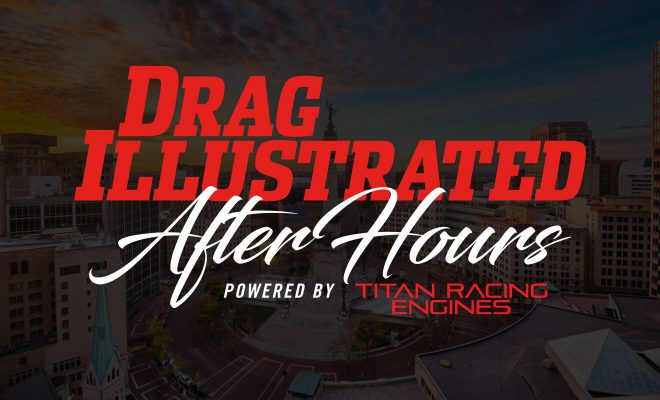 “I can hardly describe how stoked we are to not only get back to having the party but get back to PRI in general,” said J.T. Hudson, vice president of business development and client relations, Drag Illustrated. “It’s always fun to talk and chum it up with friends and partners. It’s so amazing the relationships that are formed from this awesome sport. We couldn’t be more excited about the party.”

While INVY hosted DI After Hours in 2019, the club went under new ownership shortly after the party. The new owner, Jason Jenkins, made sweeping changes to the venue’s layout and staff. Jenkins, who also owns other popular nightclubs in Indianapolis, promises an improved party experience.

“We’ve wanted to take the party to the next level,” Hudson said. “It just seemed that we were never able to find that partner to allow it to happen, but I believe Jason Jenkins will do just that. This is what he does, host some of Indy’s biggest events. He also owns Tiki Bob’s and the Pavilion, so make no mistake, this isn’t his first rodeo. I believe he is hosting Lil Jon the weekend before us. He’s had this party on his radar for years and always wanted to be a part of it. Now he is, and as a bonus, he’s a car guy.”

Improvements to the party experience include a larger staff, several VIP hosts and bartenders, expedited entry, and increased security. A number of changes will also be implemented to comply with city and state COVID restrictions.

“To help deal with regulations from COVID – as all businesses are – INVY’s event page will allow guests to go online and purchase their tickets prior to the party,” Hudson said. “It will decrease wait time to enter and streamline the whole process while allowing us to comply with the regulations set in place by the city for attendee numbers.”

Party goers can pay a discounted cover charge online in advance. Attendees can also pay a cover charge at the door at 9 p.m. if tickets aren’t sold out. For early access at 8 p.m., attendees can pick up a party pass lanyard available at the Drag Illustrated booth in the PRI Show (Booth #4452).

“The DI party is one of the catalysts of the drag racing offseason finale,” Clark said. “You somehow end up there whether you’re planning on going or not. You somehow gravitate toward that center hub. It becomes a good social networking place. We do business with the people we like and the people we can crack a beer with. DI After Hours is just a haven for the potential customers that I want to sell engines to. It’s an opportunity to get the name out there as a new company in an old business. It really aligns with our sentiments as a company and it makes a lot of sense to partner with the DI team, and Wes especially. Those are the guys we want shouting the TRE name from the rooftops.”

The four partners leading Titan Racing Engines have a combined 100-plus years of racing experience. TRE also benefits from the expertise of engine builders Mike Smith and Steve Johns, who joined TRE when the company purchased the Gray Motorsports engine shop and assets. TRE builds and freshens engines for drag racing, dirt and paved circle track racing, and other applications.

“How awesome is it for Titan Racing Engines to sponsor the party?!” Hudson said. “Great people and friends who all love to have fun, so it should be a perfect relationship. We’re so glad they’re working with us to show the PRI crowd a good time after a long opening day at the show.”