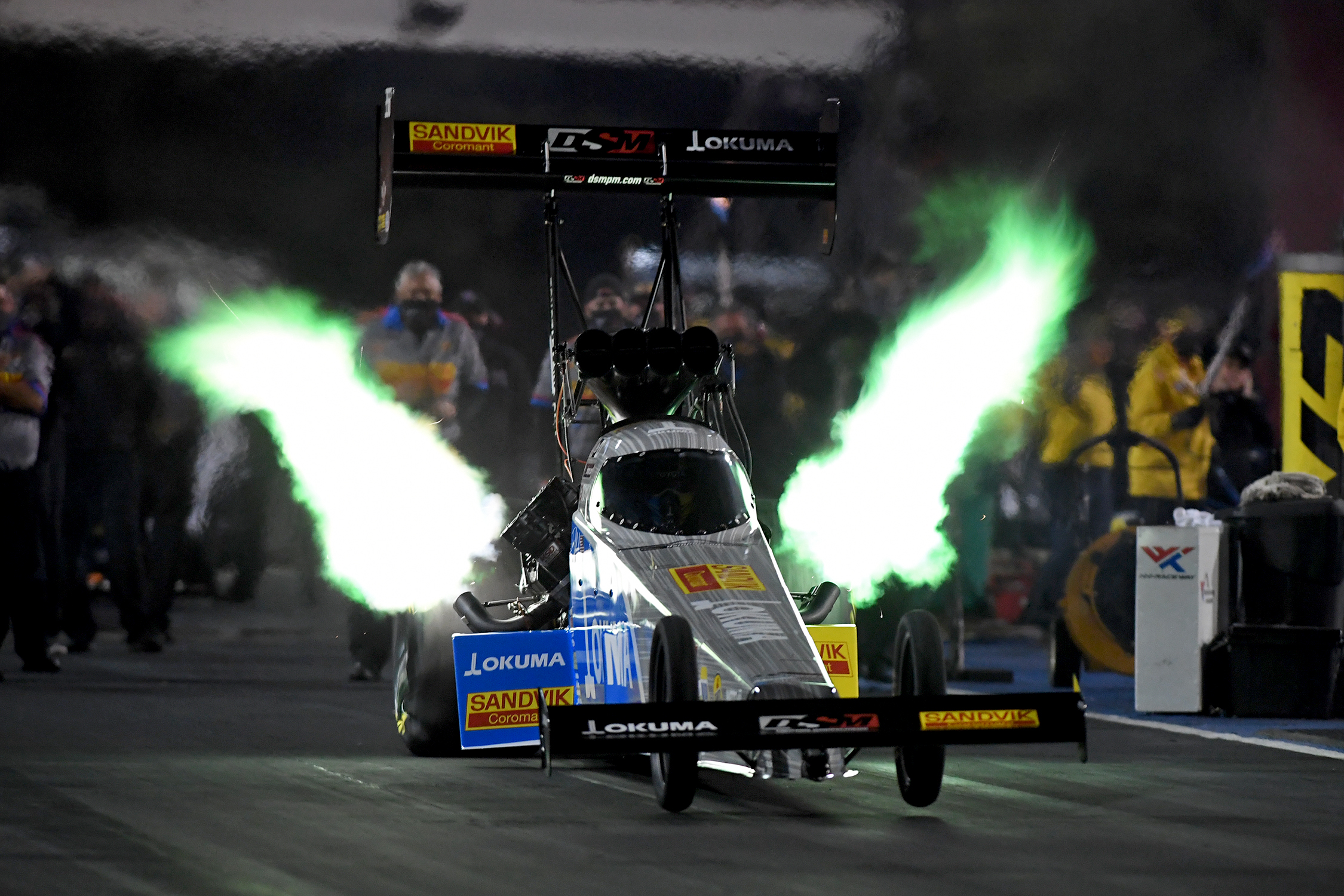 Tony Schumacher’s decision in the mid-1990s to pursue a career in professional drag racing is what brought his father and legendary Funny Car driver, Don Schumacher, back to the sport after a 24-year hiatus spent focusing on growing the family business, Schumacher Electric.

The father/son duo hit the track in 1998 as the newly formed Don Schumacher Racing, a single-car Top Fuel team with Tony in the driver’s seat, and it didn’t take long for them to find success. During their second season, Schumacher raced to his first of 85 national event wins, became the first driver to eclipse the 330-mph barrier, and was crowned the 1999 NHRA Top Fuel champion at the end of the year, winning his first of a category-best eight series titles.

Since its inception, DSR has fielded entries in five different NHRA categories, added 366 national event Wallys to its collection – the most of any NHRA team – and captured 19 championship titles. Schumacher was a major contributor to DSR’s ever-expanding trophy case, having gone on to set nearly every record in the category until his longtime sponsor, the U.S. Army, redirected its marketing efforts away from motorsports at the end of the 2018 season, leaving the winningest Top Fuel driver in NHRA history without proper funding for a full-time ride. NHRA fans have been clamoring for his return ever since, and thanks to the Maynard Family and Scag Power Equipment, Schumacher is ready for his highly-anticipated ‘second act’ as he prepares to return to full-time competition for the first time in more than three years.

“My dad and I started this whole thing together,” said the younger Schumacher. “We started with one Top Fuel car in 1998 and we won DSR’s very first championship together in ‘99, and now, we’re reuniting on the track to pursue our 20th championship title. It’s truly a ‘full circle moment.’ People aren’t used to seeing Don Schumacher Racing as a smaller team with only one nitro car, but the reality is, that’s how this whole operation started, and now here we are, together again, ready for more of that on-track magic we enjoyed for so many years.”

When Schumacher, who has been victorious at every track along the current NHRA tour, hits the dragstrip at the NHRA season-opener in Pomona, Calif. on February 18th, he will begin his campaign for a ninth championship title, and DSR’s 12th in the category. The Maynard Family/Scag Power Equipment Top Fuel dragster will be tuned by longtime DSR crew chief Todd Okuhara, with assistance from Marc Denner and Scott Okuhara. Schumacher, an 88-time No. 1 qualifier with 850 round wins on his resume, is confident in his team’s abilities to successfully gun for championship No. 20, but with the 2022 Top Fuel competition set to be as tight as it’s ever been, he knows placing himself in the hunt at the end of the season is no small task.

“2022 is going to be an insane year in Top Fuel,” said the 154-time final round contender of the field that awaits him. “You look down the list, and you have Steve Torrence, who has won four straight championships in a row. The car goes down the track every time, he’s a great leaver, a great driver, and he’s a great champion. But, there’s other competition that’s going to be just as tough. Brittany Force will continue to be very competitive, and the two Kalitta cars are going to have the tune-up of Alan Johnson. Antron (Brown) will be tough, Tony Stewart’s team will be tough, and with our team, having the chance to work with Todd Okuhara, I think we’re going to be right there running with the best of them. It’s going to be tight this year, no doubt about it. There are quite a few teams that you look at and say ‘okay, they can show up and win at every race,’ and it’s been a really long time since we’ve seen the level of competition that we will see this year. I’m excited to get started and I’m really looking forward to getting back behind the wheel during the PRO Nitro Spring Training test session in Phoenix this week. The fans will be the real winners this year because they’re going to see some throw-down, bad-to-the-bone Top Fuel racing.”