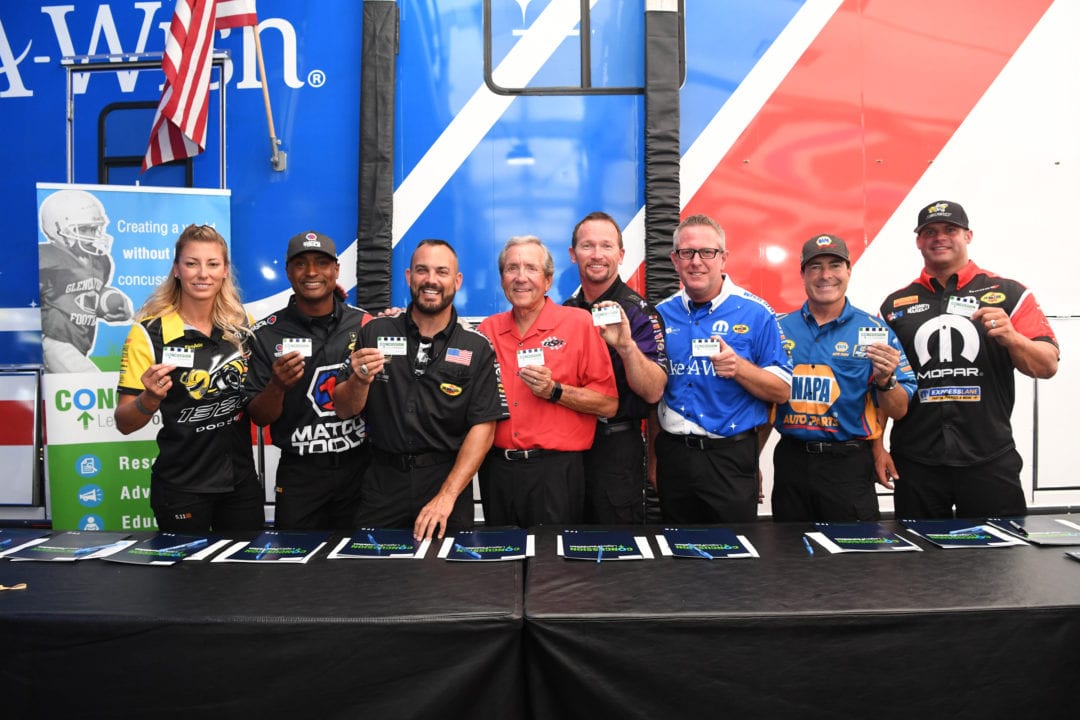 Don Schumacher Racing made history today when all seven drivers of the winningest NHRA Drag Racing team, along with team patriarch and racing legend, Don Schumacher, pledged to donate their brains to the Concussion Legacy Foundation (CLF).

At 4:30 p.m. MST, Schumacher and his roster of drivers signed the paperwork, making their commitment official. 3,500 former and current athletes and veterans have pledged to donate their brains for research since 2008, but DSR’s public declaration at Bandimere Speedway during the Dodge Mile-High NHRA Nationals marked the first time an entire team has made the commitment.

Schumacher and his cadre of drivers, who experience intense vibrations, extreme g-forces and high-speed explosions behind the wheel of their 330-mile-per-hour, 11,000-horsepower nitromethane-burning race cars, will immediately begin a comprehensive brain monitoring process to ensure an in-depth brain profile upon donation.

Through Project Enlist, CLF and IHF are conducting recruiting and outreach to the military and veteran communities to encourage participation in the U.S. Department of Veteran Affairs-Boston University-Concussion Legacy Foundation (VA-BU-CLF) Brain Bank brain donation registry. The VA-BU-CLF Brain Bank is the world’s largest CTE brain bank with subspecialties in concussion, ALS, Parkinson’s and Alzheimer’s disease.

When Schumacher heard about the program, he felt compelled to get involved and help raise awareness for Project Enlist.

“Donating my brain for research to help other individuals in this world is something that I’m more than willing to do. It surprised my wife, Sarah, but she also agreed to me doing this based on its potential to help drivers, soldiers, business people and the population of the world,” said Don Schumacher, who is highly regarded as a pioneer for innovative performance and safety procedures throughout the racing industry.

After hearing of his pledge, each of Schumacher’s seven drivers – Jack Beckman, Antron Brown, Ron Capps, Matt Hagan, Tommy Johnson Jr., Leah Pritchett and Tony Schumacher – followed suit, making the promise to donate their brains for the advancement of research on the effects of brain trauma in athletes and military veterans.

“I support this foundation 100% and was thrilled that my seven drivers agreed to donate their brains to the Concussion Legacy Foundation,” added Schumacher, who was recently named to the Motorsports Hall of Fame of America’s Class of 2019.

Schumacher hopes that his team’s public proclamation will help to remove the stigma associated with traumatic brain injuries and inspire others to step forward and make the commitment to pledge their brains to science.

Schumacher and the DSR drivers inked their commitments alongside more than a dozen military veterans, which included retired NAVY SEALS Jason Redman, Alexander Oliver, and Morgan Luttrell, who currently serves as Senior Advisor for Veterans Relations at the U.S. Department of Energy. IHF spokesperson and NHRA mainstay Gary Linfoot, former Marine Michael Wilson and more than 20 heads of veteran service organizations which have received funding by IHF also participated in the commemorative event.

For more information about how to support research at the VA-BU-CLF Brain Bank, please visit ConcussionFoundation.org/pledge.