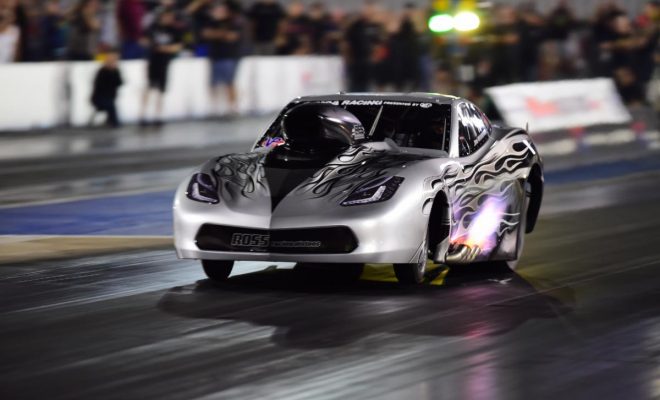 While rain threatened to steal the racers’ thunder, it wasn’t able to as they dug in and dispatched profuse power during the Nitto Tire NMRA/NMCA Super Bowl presented by HPJ Performance, July 30-August 2 at World Wide Technology Raceway in Madison, Illinois.
They were aiming for the Aerospace Components Winner’s Circle and the storied Super Bowl shootout portion of the event, where NMCA winners and NMRA winners run off for a coveted Nitto Tire Diamond Tree Championship Ring, cash and a claim to fame. This marked the first time the event, traditionally held at Route 66 Raceway in Joliet, Illinois, was contested at World Wide Technology Raceway, and it was a success.
On the NMCA side, the VP Racing Lubricants Xtreme Pro Mod category was as cutthroat as ever, with most of the racers recording 3-second runs in qualifying, and leading the charge was Jim Widener (feature image), who wheeled to a 3.70 in his Corvette. The Indiana-based hot-shoe hauled to the final round of eliminations to face California-based ace Eric Gustafson. Either driver could have won the edge-of-your-seat race, but Widener got to the finish line first, despite an explosion under his car, with a 3.74, and Gustafson was not far behind with a 3.78.
In Mickey Thompson Tires/VP Racing Madditives Street Outlaw, Dom DiDonato led qualifying with a 4.32 in his Mustang, and hung on as he hauled to the win with a 4.81 over the equally-tough Tony Hobson, who this time, was forced to get out of the throttle in his Mustang.
Racers with Mustang Cobra Jets, COPO Camaros and Challenger Drag Paks were mixing it up in Holley EFI Factory Super Cars, and Tripp Carter led them in qualifying with a 7.67 in his Mustang Cobra Jet. He was on point all the way to the final, and went to the Aerospace Components Winner’s Circlewith an 8.56 over Bill Skillman, who turned on the red light in his Mustang Cobra Jet.