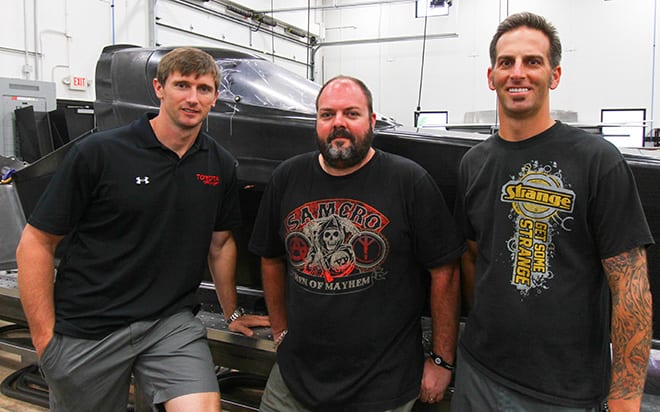 One of the combatants will be local Vines resident Mark Sheehan in his brand-new Morgan Lucas Racing-built dragster sporting the first canopy seen over the cockpit in Australia.

The new nitro dart has generated strong local and international interest since news broke that Sheehan had travelled to MLR headquarters in Indiana to tie up a replacement for his former Dave Grubnic BME built dragster.

Recently arrived in Australia, the car was assembled and will make its first pass in anger just four days shy of the Top Fuel season opener for 2015.

“We are testing Tuesday and Wednesday in preparation for the first round,” said Sheehan.

“The cockpit is pretty cool, the vision is purely just what you need to see, its actually quite comforting being inside with the lid down. Maybe that’s just through my Nitro Funny Car experience? It would be interesting to get an opinion from another driver who hasn’t been in a Funny Car before.”

This weekend will see two rounds in two days using the three round format consisting of a one shot qualifier, elimination round and the A and B Finals to decide who takes the points.

To relieve the pressure there will be a test session at 2pm on Saturday to allow the teams to get familiar with the track and weather conditions before qualifying at 6pm.

“Weather will play a big part, I think its possibly going to be very humid this weekend,” adds Sheehan. “We will be testing our new clutch program and then take it from there.

“One thing I have learnt in fuel racing is, never go into a race meeting being too confident, these things will bite you in the arse at any opportunity.

“Having said that I’m very happy with how the car has come together being assembled over the last two weeks. The car was tech inspected on Monday, then after that we fired it up for the first time and then loaded up for testing.

“A lot of work is needed before we get the car from A to B but the car will be very fast, I think we proved to all Top Fuel teams that we could mix it with the best of them on race day with a car that was at least 15 – 20 years old so it is going to be very interesting that’s for sure.”

Recently the Perth Motorplex has been the site of record setting pace in Top Doorslammer when John Zappia completed the first sub 5.70-second pass with a 5.683 while Craig Glassby set a new Top Alcohol Funny Car world record with a 5.410 elapsed time.

While a lot depends on the weather, Sheehan thinks the first sub 4.50-second Top Fuel pass in Australia is just around the corner and he hopes to play a big part in the chase as he prepares to run the full ANDRA Drag Racing Series in this short six month season before the championship returns to a full financial year calendar.

“With some generous support from within Top Fuel Australia I can confirm we will be travelling for the short season.

“Like I said, weather is a big factor as far as big numbers go. I think there is definitely a race on between two teams on who is going to run the first 4.4 down under, so let’s just say that Sheehan Racing want to be in the mix and keep the pressure up to hopefully be part of that milestone.”